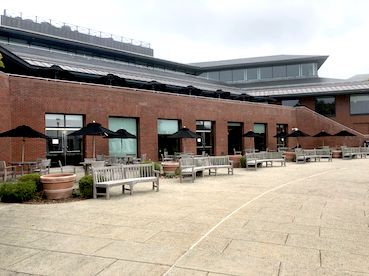 “We should grab a meal.”

Whether it’s to catch up with your freshman year roommate, talk over material with a classmate, or meet up with your latest Tinder match, grabbing a meal is a sacred rite for University students.

“The decision to change the fall class meeting times was mandated by the state of Connecticut if we were going to have in-person classes,” University registrar Anna van der Burg wrote in an email to the Argus. “We had to ensure at least a half hour between class meetings in order to clean classrooms.”

While the 30 minute break between afternoon classes may be a nice breather, the new class schedule has left many students without enough time to eat lunch.

“Tuesdays and Thursdays I have only a half hour for lunch and I have to walk all the way across from campus so I just don’t eat a normal lunch,” Becca Baron ’23 said. ”At the beginning of the semester, I was trying to eat lunch in between, but I would have to go to Usdan, eat something super fast, and then I would literally shove it into my face outside my class, and it wasn’t working.”

Savanna Goldstein ’22 expressed similar frustrations. As someone who is high risk for COVID-19, the rush to campus dining halls during lunch compromises her safety.

“I’m trying to rush through something, which means I have less opportunity to wait a little bit if it feels too crowded or move away from people,” Goldstein explained. “The faster you’re trying to run through something, the harder it’s going to be to stay COVID compliant. Being high risk and being on a time budget means that I’m putting myself at more risk than I ever should be.”

Goldstein also emphasized the impracticality of getting to certain dining locations in the allotted times.

“For most people on campus, Usdan is not even an option to do in thirty minutes because of how far away it is,” Goldstein said. “How am I going to walk to a place that’s ten minutes away and back and then only have ten minutes to do food in a safe COVID way during the height of lunch hour?”

Dani Glenn ’22, who is living off-campus this semester, has also found it hard to make it to dining locations within the shortened thirty minute break window.

“I’ll just grab a granola bar and go to a lunch meeting,” Glenn said. “There’s no time to really go out and come back for a Zoom class.”

Though it poses challenges for everyone, the lack of a longer lunch break can be especially detrimental to those who have a complicated relationship with food, such as people with eating disorders.

“People who have difficulty with eating regular meals in the past, it could potentially make it more difficult because it’s easier to just kind of ignore [meal time] because it’s not the same large gathering it used to be,” Glenn remarked.

Students observed that the scarcity of time to eat exacerbates an already toxic culture surrounding eating at the University.

“The culture of eating at Wesleyan is already really unhealthy,” Talia Eligator ’23 said. “People just don’t eat as much as they should. People will be like ‘I’m too stressed by this paper due at 5:00 I’m not going to eat lunch’ or ‘I don’t have enough points or swipes.’ There’s so much anxiety and so many excuses around eating which is just so not healthy.”

The prospect of eating lunch alone has also caused undue stress for some students.

“It’s nice to have that social aspect so you’re not thinking so deeply, sitting with food alone, and there’s an element of socializing that could be helpful with that,” Violet Daar ’22 said. “I feel like [short lunch times] just adds to the stress of a relationship with food that’s already strained.”

Students emphasized that with shortened lunch times, there are fewer opportunities to be social, which people desperately need in such isolating times.

“Getting meals with people is a huge part of making friends and maintaining relationships on campus, so only having two days [a week] to do that or whatever, it’s hard,” Baron said.

As Daar pointed out, even if you don’t have specific lunch plans, meals can still be a time to socialize.

“Even if you’re going alone, you end up being surrounded by people you know or running into a classmate, which I think is really important especially when you’re first at the school and trying to figure out friends,” Daar said.

Not only does lunch provide a time to eat and socialize, it also gives students a break from the monotony of classes. And as many students are spending more time in their rooms, these day-to-day recesses become even more significant.