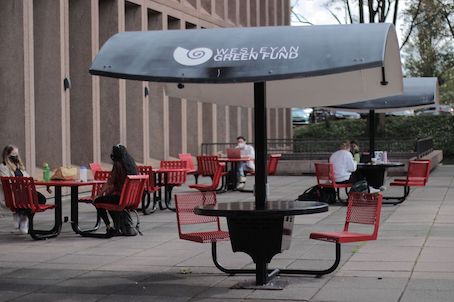 Wesleyan students love to come up with projects. Whether it’s an idea for a new app connecting students on campus or a piece of performance art, the imagination of students is limitless.

However, many projects come with a significant barrier: funding. Many of these projects require out of pocket costs that most college students can’t afford.

That’s where the Green Fund comes in. The Green Fund was established after a group of students—who had seen a similar model at other schools such as Tufts and William and Mary—brought the idea to the Wesleyan Student Assembly (WSA) in December 2009, where it was approved by a 31-1 vote. In March 2010, the Board of Trustees approved the project, and the fund itself came into effect in Fall 2010. Last December, The Board of Trustees approved the fund for another five years.

The group uses its budget to fund sustainable projects on campus. The money for the Green Fund is collected from students’ tuition every year. Each student is charged a $15 biannual (per semester) fee, which amounts to a Green Fund budget of between $80,000 and $85,000 per year. While there is an option to opt out of the fee, in the past only 3-7% of students have chosen to do so, according to Green Fund Committee member Andrei Pinkus ’21.

The fund is managed by a group of students who make up the Green Fund Committee. This year’s committee is composed of Co-Facilitators Phoebe Landsman ’21 and Syed Hussain ’21, as well as Catherine Xi ’21, Claudia Stagoff-Belfort ’21, Shaya Tousi ’22,  Izzy Durcan ’22, Jolie Villegas ’21, and Samela Pynas ’22. The committee receives and vets project proposals, oversees the projects and distributes funds accordingly. Any student, faculty, and staff can propose a project via the Green Fund website. Projects are accepted on a rolling basis.

Since its creation, the group has funded hundreds of projects on campus, many of which students encounter on a daily basis. For example, the solar power tables outside of Pi are the result of a 2015 Green Fund project. The Green Fund also funded the addition of a second electric car charging station in the L Lot (behind the Butterfield Dorms), as well as widespread industrial compost bins. Last spring, the Green Fund collaborated with Physical Plant and an independent contractor to install 960 square feet of green roof on the new Film Studies building.

This semester, the group is using some of their funds to purchase over 3,000 reusable utensil kits to help students dine more sustainably on campus.

While the Green Fund has continued to invest in some of the same projects over the years, such as upkeep of the Wild Wes (the permaculture area by WestCo) and Long Lane Farm, in recent years, the group has taken a more intersectional approach to funding projects.

“I’ve seen such a shift since I was a freshman to a senior, not just in the Green Fund, I think it’s sort of reflective of the entire community,” Landsman said. “I think at the beginning it was a little more like composting, recycling, which is still super great super important, but we’ve now shifted our focus a little bit to make sure that environmental justice is core in everything we’re doing.”

“There have been student identity groups who have applied for funding because they’re looking to bring more reusable items to a meeting or looking to get a more sustainable alternative or looking to bring a speaker that has an intersectional focus on some sort of social issue and an environmental issue,” Kleindienst said.

The group hopes to bring this intersectional approach to this semester in particular, as they seek projects that will address both sustainability issues and COVID-19, whether it be improving upon minimizing waste in dining, classroom use, or PPE use.

“One of the things that we talked about is the prospect for the Green Fund to be used to help the campus make physical changes that improve sustainability and public health at the same time,” Kleindienst said. “There are many things that we’re doing as a campus this semester that are not environmentally sustainable, using more energy to get more airflow into buildings, using disposables. There’s really nothing that we can do about those… But are there structural changes that Wesleyan could make to reduce that impact over the long-term?”

The group is also working to expand in order to help with Middletown sustainability initiatives. Currently, the group funds projects such as GRO Dreamville, a student group that plants gardens in the North End to fight food disparity, racial injustice and income inequality within Middletown. The Green Fund hopes to continue to fund similar projects that are meaningful to both the Wesleyan community and Middletown residents.

“We think that it’s a really important thing to get [Middletown residents] involved in student affairs and students involved in Middletown affairs,” Pinkus said. “Because Wesleyan’s going to be here for a long time, and to have those sort of community connections is pretty valuable.”

While the proposal application process may be vaguely reminiscent of  the premise of Shark Tank, the facilitators were quick to distinguish their approach from the intimidating nature of the show. Green Fund members explained that anyone who is interested in receiving funding should submit a proposal, no matter how fully-formed their idea is.

“If you have an idea that’s not very formed and you’re like ‘oh I think this could work,’ we also want to hear that,” Landsman explained. “If you have an idea, one of us will just work with you on that, developing it into a full blown project that then we can actually fund.”

Kleindienst also pointed out the flexibility and adaptability of the Green Fund and its committee members.

“The Green Fund is really meant to be something for everyone,” Kleindienst said. “The Green Fund is interested in hearing creative ideas, however big or small, and even if you just have a seed of an idea and you’re not sure how much something will cost or what might be possible. The Green Fund acts both as funding source, but also as a project sounding board and collaboration pool.”

Pinkus also urged students to take advantage of the opportunity posed by the Green Fund, especially because of their immense—though relatively unknown—store of financial resources.

“People don’t realize we have this massive sum of cash to dole out to students,” Pinkus said.
Hannah Docter-Loeb can be reached at hdocterloeb@wesleyan.edu.