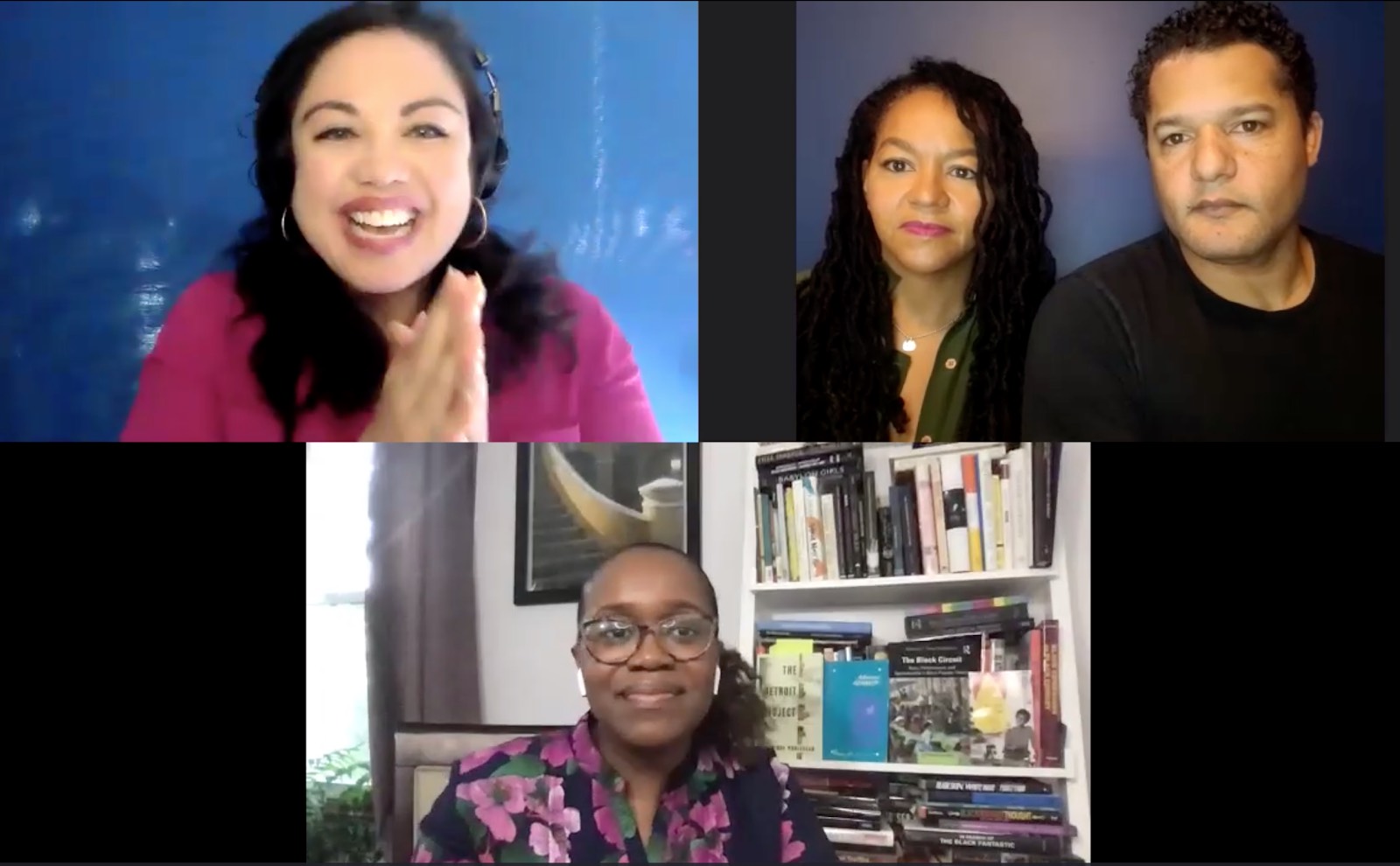 “I stand myself and my art squarely on the self-defining ground of the slave quarters,” playwright August Wilson remarks in his
speech “The Ground on Which I Stand,” “find[ing] the ground to be hallowed and made fertile by the men and women…warriors on the cultural battlefield that affirmed their self-worth.”

Wilson delivered this speech in 1996, when Associate Professor of English Rashida Shaw McMahon’99 was a rising sophomore on the University’s predominantly white campus. Since returning to the University as a professor, Shaw McMahon has taught the August Wilson First-Year Seminar (FYS) almost every year since; I had the privilege of taking it this past summer. As she and Wilson’s speech reminds me, Wilson was in no way an artist who stood on isolated ground.

As he states more explicitly later on in the speech, these Black “warriors” were the catalysts of who led the Black arts movement of the 1960s. Wilson’s immense legacy was contextualized, revered, and questioned in the event “Re-Evaluating the Ground on Which We(s) Stand(s),” which took place virtually on Friday, Sept 25. The two-hour event was moderated by Shaw McMahon along with Assistant Professor of Theater Maria-Christina Oliveras. The 150 members of the University community who joined the Zoom call were able to watch Broadway performers and power couple Crystal Dickinson and Brandon Dirden perform the works of influential Black playwrights, and discuss the role of Black plays in the current American moment.

Esteemed short story writer Flannery O’Connor said that good writing resists paraphrase, and although she was referring to the short story, I find that the gifts of great writers and their masterworks are also too profound to condense into a few phrases. This is why I find August Wilson difficult to summarize. As one of the first commercially successful Black playwrights in American theater, Wilson was extremely ambitious. Although his success kicked off with his second play “Ma Rainey’s Black Bottom,”
his legacy spans from his first play “Jitney” to his last play “Radio Golf,” the respective bookends of his ten-play cycle: a series of ten plays, each meant to represent one decade of the 20th century African American experience.

If you continue to look at Wilson’s works, it’s interesting to think about the fact that he didn’t write these in chronological order.
His third play “Fences” is his most popular—perhaps you’ve seen the film adaptation directed by and featuring Denzel Washington. But as Shaw McMahon emphasizes, “Fences” is far from representative of the Wilson canon. He composed it with the hope of achieving commercial success. Notably, he arrived at the complete opposite result in his next play “Joe Turner’s Come
and Gone”, whose complication of the slave-master image and diasporic imagery (think magical realism but focused on African spirituality and Blackness) was too radical and too powerful for Broadway audiences to grasp.

For students who know Wilson only through “Fences,” one of Shaw McMahon’s goals in teaching the course was to explore Wilson’s interdisciplinary style in the rest of his works. However, his indisputable contribution to Black theatre is also a conversation starter. Learning about Wilson is a step towards appreciating the monumental spectrum of BIPOC theatrical works.

Shaw McMahon’s aims for her FYS class align well with those of Oliveras, who joined the theater department in the fall of 2019 and has already become a force in the movement to diversify the theater department. Shaw McMahon emphasizes that this event, which will be an ongoing series of engaged discussions surrounding POC in theatre, was Oliveras’ idea.

“[Wilson is] an extraordinary American playwright,” Oliveras said in an interview with The Argus. “Black theatre [and] BIPOC theatre can actually exist with… all of the contradictions. Can we both celebrate and honor our own authenticity… while, you know, entertaining white audiences?”

“Palatable” was a word that both professors used to describe Wilson’s works, particularly those such as “Fences,” which larger audiences are familiar with. Considering the breadth and variety of BIPOC theatre, Oliveras had to reconcile August Wilson’s place in the canon when she proposed what will be the event series. With this intention, Friday’s first installment of “The Ground on Which We(s) Stand(s)” was born.

Except it could not feature August Wilson.

Everything had been planned, including the hours that had been spent in virtual conversation and the hours that acclaimed Broadway actors Crystal Dickinson and Brandon Dirden had invested as they prepared to discuss and perform scenes from Wilson’s works. Then came the email from the August Wilson estate. Due to Netflix’s upcoming adaptation of “Ma Rainey’s Black
Bottom,” the estate had to sign over not just the rights to this play, but the rights of anything that Wilson had ever said or written if these quotations and/or scenes were to be live-streamed.

As corporations such as Netflix continue to exercise rights over future bodies of work, I recommend that they start taking into consideration the language of these canons. Historically referred to as “The Mother of the Blues,” Ma Rainey makes the following observation in her titular play and the one which Netflix chose to produce:

“As soon as [the white producers] get my voice down on them recording machines, then it’s just like if I’d be some whore and they roll over and put their pants on,” Ma Rainey states. “Ain’t got no use for me then.”

It would seem that Netflix takes an equally-perverse pleasure in the power of possessing Black art. And just like that, capitalism exposes its devastatingly-poor close reading.

But this was a conversation about art. And art, of course, is no stranger to transcending capitalist restraints. As the best of artists do, Shaw McMahon, Oliveras, Dickinson, and Dirden crafted something beautiful beyond the material that they were unable to use. Their study of Black plays in white spaces instead was organized around four plays by Black women: Lorraine Hansberry’s “A Raisin in the Sun,” Alice Childress’s “Trouble in Mind,” Adrienne Kennedy’s “Funnyhouse of a Negro,” and Dominique Morriseau’s “Detroit ‘67.”

But I opened this article with a quotation from Wilson’s speech for an important reason, which goes beyond the fact that “The Ground on Which I Stand” is the origin of the event’s name. The estate permitted five lines of his speech to be quoted over live-stream, and when Shaw McMahon received the list of playwrights and plays selected by her colleagues, she honed her focus on five lines in the speech where Wilson references both men and women, an essential framework for considering the undervalued presence of Black women within Black theatre. Moreover, as Shaw McMahon frequently highlights in her FYS, Wilson’s attempts to capture the collective African American experience in his ten plays are predominately through a male and heterosexual gaze.

Wilson credits both male and female Black “warriors” with hallowing his literary ground. For Shaw McMahon, this is significant not just in considering the foundations of Black art, but in considering Black living.

“When [Wilson] talks about his…ancestors who have cultivated this art, he says very inclusively th[at] men and women have not only forged this way through their art, but forged their way through surviving,” explained Shaw McMahon.

“The people that didn’t make it across the water… got a burning tongue, Mr. Citizen,” says Aunt Ester in “Gem of the Ocean” as she refers to the Africans who live another life in “the city of bones” after drowning in the Middle Passage.

In the scenes that Dickinson and Dirden performed, Black women share this particular burden of both telling and surviving, and more often than not, their telling goes unheard. When Wilson speaks of the men and women who grounded his Black artistic world, Lorraine Hansberry is one of the more obvious figures. She was the first Black woman whose play was produced on Broadway. Her traditional form, coupled with a focus on domestic Black life, indicates that she is one of Wilson’s essential inspirations.

In the “A Raisin in the Sun” scene selected for the event, Mama (performed by Dickinson) listens to her son Walter (performed by
Dirden) as he ranks his material aspirations above the quality of his life, which she, as his mother, has worked to protect. “You ain’t satisfied or proud of nothing we done,” Mama says. “I mean that you had a home… You my children, but how different we done become.”

The actors subsequently performed a scene Alice Childress’ “Trouble in Mind,” which would have been on Broadway before Hansberry’s play, had she changed the ending to appeal to the preferences of a white audience. In the scene, a white director Manners (played by Dirden) shames the Black actress Willetta (played by Dickinson), for protesting the fact that she must play the role of a mother who throws her son “into the teeth of a lynch mob.”

“Would you do this to a son of yours?” Willetta asks repeatedly.

“Uh uh uh,” Manners responds. “Don’t compare yourself to me.”

This injustice is wrong. Within the talk, we recognized this. We recognized how important these hard truths are to consider.

Which still leaves the question: why deliver these truths through the medium of theatre?

For Dickinson, the power of theatre is its platform for feeling discomfort.

“[With discomfort] you will catch fire in your educating,” Dickinson said.

This is true beyond theatre, but consider the intimate voice, the dialogue, of the theatrical experience. When Dickinson and Dirden taught a masterclass to University acting students that I was able to observe, they walked a student through a monologue of a young Asian woman reflecting upon her discrimination in America.

“On the other side of the camera lens, can you put a person who won’t listen to this?” Dickinson asked the student.

Accomplish this, this voice which the actor must unfathomably, almost unimaginably, turn into the character they’re portraying, and you’ll set the world right, said Dirden with the kind of certainty that makes you trust that he is right.

The University is still far away from setting its own world right. Throughout the University, there are departments with no Black professors, majors with only a handful of Black students, and no specific diversity requirements within the curriculum.

As Shaw McMahon notes, there are not nearly enough POC at the University who major or minor in the arts. Brianna Johnson ’24, a Black student who took the August Wilson FYS with me this past summer, spoke on how taking a class about a Black playwright with a Black professor was itself a challenge to the comfortable education of the status-quo.

“Having a Black professor, a Black female professor, also positively affected my psyche in the class because I could see myself in a professional and academic setting,” Johnson said. “I think it’s important to center myself in Black diasporic studies because learning about myself… allows me to visualize myself in a more positive light than maybe the stereotypes that I sometimes tend to internalize.”

The University, like any centuries-long, predominantly white institution on the East Coast, carries the legacies of anti-Blackness and white supremacy within its very foundation. The University will not be able to implement change in sticking to comfortable conversations and performative gestures but must take on the issues at their roots, in the classrooms, in how racism manifests on campus. This project started with artists like August Wilson, and now it is our responsibility to continue his legacy.

Do you hear that Wesleyan?

Because therein the lives of our students could change, and we, as a community, can make change.

Chiara Naomi Kaufman can be reached at cnkaufman@wesleyan.edu.