“I just have one thing to say… hang on here… [Luis Fonsi’s “Despacito” starts playing]… I’ll tell you what, if I had the talent of any one of these people I’d be elected president by acclamation.” 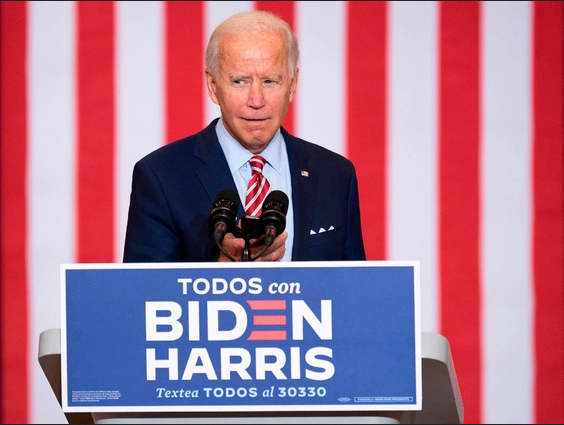 In the darkest hours of the night, as I stare into the dark corners of my bedroom, mourning the loss of over 200,000 souls I will never know and thinking of the one soul that I did know: Joe Biden. I think of him playing “Despacito,” the smash-hit song of 2017, in a plea to get the Latinx vote. These people are more talented than him, he admits.

“It’ll hit all the demographics,” I imagine one of his top aides advising him. “The youth crowd is really into it. It’s their version of ‘Jack and Diane.’ Just whip out your phone and start humming along, it’ll all make sense.”

“I’m not sure this is what he needs to be doing,” his Gen Z intern Cassie dares to speak. “People my age are really just concerned about getting jobs. That song literally reminds me of high school and I’m not sure it’s still rela–”

“It’ll be a BIG HIT. HUGE!” interrupts Linda from PR. “Kids these days need the memes, they need the jokes, they need the buzz. Now is the time to harness the power of pop culture to your advantage.”

I can’t stop thinking about Biden playing “Despacito.” It has kept me up, toiling with my subconscious, taunting me with its sincerity and absurdity. Is this how Democrats think we’re going to win? By referencing celebrities and stale Top 40 hits? If that’s the key to winning, this is how I imagine the rest of the 2020 election cycle will go:

At the first presidential debate, Biden glides in on a skateboard, does a 360-degree inward heelflip off of the empty stands, and ends with a dab. He takes off his stuff shirt to reveal a grey shirt that says “Insert Popular Music Band Here.”

“How do you do my fellow kids?” he says, effortlessly putting on his signature aviator glasses. A “30 Rock” reference! Gay Twitter goes wild. A classic. He double-fists two vanilla ice cream cones in his hand, in a nice callback to his VP years. It almost makes you forget that Donald Trump has already started to blame the lack of any governmental mask policy on Biden himself.

They talk about policy: climate change, immigration, Russia’s semblance of a democracy, China’s influence on the economy, blah blah blah, who cares. What really matters is Biden’s concluding remarks.

“Four years ago, a mighty woman, a nasty woman, tried to break the highest glass ceiling this world has ever known: being the first woman to be able to send drones out to the Middle East,” Biden says solemnly. “She couldn’t achieve that goal. What happened? Pokemon Go to the Polls was simply not enough. That’s why I just have one thing to say…”

Trump is nowhere to be seen: he snuck out fifteen minutes ago so he could appoint Ted Cruz into the Supreme Court that night while everyone was distracted.

“Yas Qween! They did that!” Reese Witherspoon posts to Instagram with a screenshot of the performance. Aesthetic slideshows start popping up on Insta stories. It’s a true pop culture moment. TikTok, hanging on for dear life since Trump’s executive order, is revitalized with people recreating the choreography. A meme then starts floating around Reddit that depicts Trump and Pence as the Team Rocket couple from Pokemon. It’s shared over Facebook by all of your friends’ moms. It’s the only thing you can see on your timeline besides conservative ads implying that Biden has dementia.

“It’s handled,” she says into a flip-phone, before throwing it into the socially-distanced crowd. Harris leaps across the stage, does a sickening death drop and pours glitter over her podium. She puts on a bright yellow “Watchmen” style mask, while the wind blows through her hair just like Maya Rudolph on “SNL” (which now, by the way, only streams on C-SPAN). Mike Pence just walks out and stands, watching.

They talk about policy: the devastating wildfires in California, the rapid dissolution of abortion rights, police brutality, the prison industrial complex, and so on. The two candidates get into a heated debate about the semantics of the border camps: Pence doesn’t think they’re “concentration camps,” preferring the term “relocation facilities.” But all that anyone talks about the next day is Harris’s concluding remarks, which Twitter was quick to split up into GIFs:

“If you don’t vote for me, you ain’t Black, Indian, mixed-race, or Asian! Periodt!” she says, with an intentional wink to the camera. “You know, I’ve read a book that’s a lot like the situation happening in America right now. It’s a little book called ‘Harry Potter.’ Trump is Voldemort, Joe is Dumbledore, and I’m McGonagall. It’s that simple. Oh, and like, forget about all that J.K. Rowling stuff by the way… that’s a big yikes.”

“RECLAIMING MY TIME, RECLAIMING MY TIME!” exclaims Harris. “You know Mikey, the world has been run by men for a very long time. But it’s the strong girl bosses who make history. Do you know what Rosa Parks said when they asked her to move? ‘Nah.’ You know what Malala Yousefzi said when they thought she was going to die? ‘Nah.’ And so that’s what I say to you all. ‘Nah.’ Your time is up!

Across the country, people start putting up signs with the phrase “That little girl was me” followed by their favorite girl bosses: Hermione Granger, Lisa Simpson, Tracy Flick, Lizzo. In the bottom right-hand corner, in tiny print, is “Biden 2020.” Meanwhile, Pence just convinced Trump to sign a new executive order making gay electroshock therapy legal, so he can get back to what he does best post-2024.

Somehow, all of this works. Pop culture is the key to solving all of the problems of voter suppression, the destruction of the United States Postal Service, the slow dismantling of any kind of democratic norms. For some reason, people who make clever references to Disney movies are starting to become more immune to COVID-19, so Buzzfeed quizzes become the vaccine to this deadly disease. The FDA approves this swiftly, of course.

Because why do you need comprehensive healthcare when you can have band-aids that come in every different skin color? Why do you need a raised minimum wage when you can buy “The hustle is real” shirts off of Amazon? Why do transgender people need rights when can you watch Caitlyn Jenner on TV? Why does Guantanamo Bay need to be closed, when we can all just “be kind” like Ellen says? Why do you need accountability for the people who murdered Breonna Taylor when you can have “Black Lives Matter” plastered on the streets on every corner of the country?

Joe Biden has stumbled upon the sacred, holy truth: pop culture is the thing that can save America.

With the coronavirus pandemic being magically lifted by the power of knowing which “Friends” character you are, Joe Biden’s ascendancy is a glorious one. His cabinet is stacked with all of your favorite celebrities. Pete Buttigieg is the first (openly) gay man to be put in charge of Veteran Affairs, and he publishes a new memoir, “Do Ask, Do Tell! The Military is Low-Key Super Gay.” RuPaul is the new Secretary of Agriculture, and he makes fracking legal so that every American can make money as fabulously as him. Bobby from “Queer Eye” is even named Secretary of Housing and Urban Development, and he redesigns all federal housing in this really trendy, thrifty look while no one pays attention to him. Rent increases everywhere.

Nancy Pelosi even obtains a new job: Secretary of Clapbacks. Her job at every event is to clap weirdly and tear up pieces of paper any time the Republicans speak. She’s also convinced the police to drop their boring old black suits, and take up that hip kente cloth that everyone loves.

The inauguration is spectacular. Michelle Obama walks up in her finest Christian Siriano dress, with the phrase “Nolite te bastardes carborundorum, bitches” emblazoned on the front. She speaks warmly to her dear friend.

“Hey King! Dude, you have done it again,” she says. “Constantly not raising the bar but keeping it within a nice, moderate position for us all, and doing it flawlessly. I’d say I’m surprised, but I know who you are. I’ve seen it up close and personal since you and my husband have this bromance that’s so iconic. Joe, you make me so proud. And America has settled for you!”

Joe Biden knows he has quite the act to follow. At the last minute, he throws away his speech. In front of the White House, he takes a brief inhale from his vape pen and just says, “Thanks Obama.” He drops the mic. The crowd erupts. We go wild.

Melania Trump is seen squinting and slightly smiling during this part of the inauguration. People are convinced that she’s a part of the resistance. Come on, shade queen! Meanwhile, Jill Biden’s gift to Melania is a homemade “chocolate pie.” On the outer reaches of the Rose Garden, Octavia Spencer snickers, thinking to herself, “That’ll show them.” Since all good Democrats have re-watched “The Help” and read “White Fragility” this summer, they’re all in on the joke.

Biden, fulfilling the promise of his earlier campaigning, has made sure all the performers at the celebration dinner are Latinx. J-Lo does a sultry dance to Fiona Apple’s “Fetch the Boltcutters” standout “Ladies,” as a slideshow of all the one hundred female House of Representative members plays in the background (Alexandria Ocasio-Cortez is begrudgingly included). Afterward, Lin-Manuel Miranda ’02 performs a song from his new show, “Reagan: An American Musical,” which features an all-gay cast.

“It’s the story of America then, as told by gay Americans now,” he explains to reporters afterward. “I know some people think it’s problematic to have minorities portray their oppressors. But I think about how influential Reagan was in shaping this country, and I see a lot of myself in him. We are both actors who got into politics, after all. Siempre!”

The finale is, of course, “Despacito.” Yes, apparently America still cannot get enough of that song! Truly an anthem of our time! As Luis Fonsi and Daddy Yankee take the stage, all of America tunes in for a collective karaoke moment. Most of us sing a rough approximation of the Spanish that we never got around to actually learning. From sea to shining sea, we sing this Spanglish together, one gigantic melody that unites red states and blue states together in our shared love of art.

On the U.S.-Mexico border, there are still concentration camps, or relocation facilities, or whatever you want to call them. Undocumented children are still being kept in cages. Grown men huddle together underneath tin foil blankets, freezing at night. Detained women are being given forced hysterectomies by Dr. Mahendra Amin. And all of them are still wondering when they can be free, too. Do they need to watch all of our movies and TV shows? Do they need to get on TikTok and discuss their love of “How I Met Your Mother?” What will it take for America to see them as human?

“How will things change for us?” asks one of the children through steel bars to an indifferent ICE guard. “How quickly will we be freed from this hell?”

The incessant hum of America sings a response to the child: “Despacito, despacito…”