A Peculiar, Comforting Night of Live Soccer at Dillon Stadium with Hartford Athletic 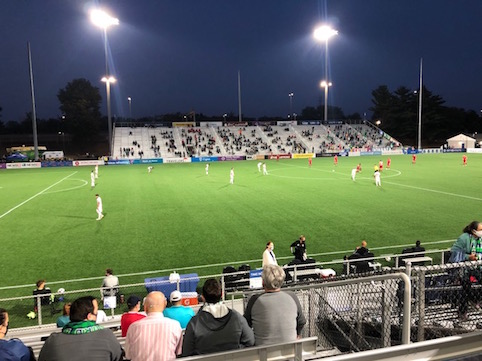 The best part of every live professional sporting event passes by in an instant. Almost without fail, you get to the stadium, have your ticket scanned, pass through some haphazard security and walk to find the entrance to your section. You pass through an open doorway, up a ramp that carries you from the concourse to the interior of the stadium and… bang, you feel it. The energy hits you like a wave.

Every stadium is a bit different. At Dillon Stadium, the home of our local second-tier professional soccer club, The Hartford Athletic, tonight is a night of celebration. It’s the last home match of a bizarre season. Hartford clinched a spot in the playoffs a few days ago, so there’s no stress, no sense of pending existential doom. Fetty Wap blasts from the speakers. Dozens of fans wait by the concessions stand and a couple food trucks, chatting amongst themselves. A few players skip through cones and kick the ball around. We’re still a few minutes away from more strenuous warm-ups.

Confined to one stand, the club’s shockingly passionate organized fan groups wave flags, chant and bang on drums. This continues for the whole game and carries the stadium’s vibe. At one point, they do a version of the choreographed Icelandic “Viking Clap.” When the starting line-up of tonight’s opponents, Philadelphia Union II, are announced, they all turn their backs to the field. It’s lovely. These groups are in the East End, but it’s the wild west over there.

As we prepare for kickoff, everything feels more or less normal given the expectations, at least.

Hartford Athletic’s COVID-19 procedures aren’t all that different from here at the University. Masks are required at all times except when eating or drinking. Every other row is marked-off and empty. People are only allowed to sit right next to each other if they are part of the same group (family unit, if you like). Within a row, each person or group is at least six feet apart from the next person or group. Foot traffic through the stadium only travels in one direction, creating a big loop.

Periodically, stadium employees walk up and down the aisles with spray bottles and rags to disinfect the railings. An employee also stands at the base of each section, watching for social distancing and mask wearing indiscretions. A few times throughout the game, the woman responsible for my section would approach fans and politely ask them to pull their masks back up over their noses.

Every 20 minutes or so, the PA announcer would shift from the game and speak briefly about the COVID-19 rules. His sentiments range from the general (be courteous and aware of the health of those around you) to the specific (pull your mask down while eating, but don’t pull it off).

To me, the game felt safe. By and large, people followed the guidelines. There were a few literal bottlenecks where, either due to poor planning or just poor behavior, people got too close to each other. The concessions line looked crammed. Sometimes people were leaning-in and pulling their masks down so their neighbors could hear them more clearly. There is clearly no system for exiting the stadium in a reasonably distanced way at the end of the game.

But for all the strangeness, the experience was deeply comforting. Just to be around people in this way again, even at a bit of distance, feels good. The sounds and smells are the same. Perhaps at a bigger stadium the weirdness would feel emptier, but not here.

I was joined, thank goodness, by a familiar cast of characters, known well to those who have spent enough time at weeknight sporting events.

There’s the old man with binoculars and the little kid with a thing of cotton candy that’s half their size. There’s the woman intensely looking on as her (presumed) husband does a crossword puzzle. There’s the entire Cheshire High School Girls’ Soccer Team, not in uniform but identically dressed. There’s the nearby couple that’s oddly, unabashedly intimate given the environment. And of course, everyone’s favorite, there’s the guy whose fun-loving, first-beer referee jeers slowly develop into uncomfortably earnest fourth-beer tirades. He’s here too.

It’s just a fun night, but of course, games can never be taken out of the context in which they’re played. The COVID-19 regulations aren’t overly burdensome, but they’re still a reminder of how painful these times are. During the national anthem, most of the players kneel in protest, while the flag flies at half-mast in honor of Justice Ruth Bader Ginsburg. After the anthem, the PA announcer leads a stadium-wide 15 seconds of silence in solidarity against racism. At the start of the second half, we collectively act again, this time with a fifteen-second round of applause to thank health care workers.

The game itself feels secondary, but of course that’s why we’re all here. Hartford got a goal off a corner kick right before half time. A fun tune plays that starts out awful then rapidly grows on you. Everyone cheers and claps and stomps along to the song. It’s these moments in sports that TV can’t quite replicate. Soccer at this level is consciously laid back and fun. Everyone’s happy to be here and it’s tangible.

Philadelphia Union II push for a goal for most of the second half. Hartford’s coach, the probably overqualified former Premier League defender Radhi Jaïdi, is not pleased. He’s angrily gesticulating, drawing patterns with his hands in the air to demonstrate how he wants his team to play. But Philadelphia keep pushing. Their coach, Marlon LeBlanc, is within earshot and keeps yelling, “keep going, it’s coming guys” to his players. In the 76th minute, it does, and Philadelphia equalize.

Something in the air changes. There’s tension now. It builds dramatically in the 88th minute when an apparent Hartford goal is called back for a foul earlier in the play. The crowd isn’t convinced. Two types of people emerge from the newfound edginess: yellers and mutterers. I’m a mutterer. The guy in front of me is a yeller.

Hartford pushes for a late goal. They get close twice in stoppage time, but it’s not meant to be. 1–1.