In Conversation With Performer Kristina Wong, Plots are Formed for Creating Art Relevant to 2020 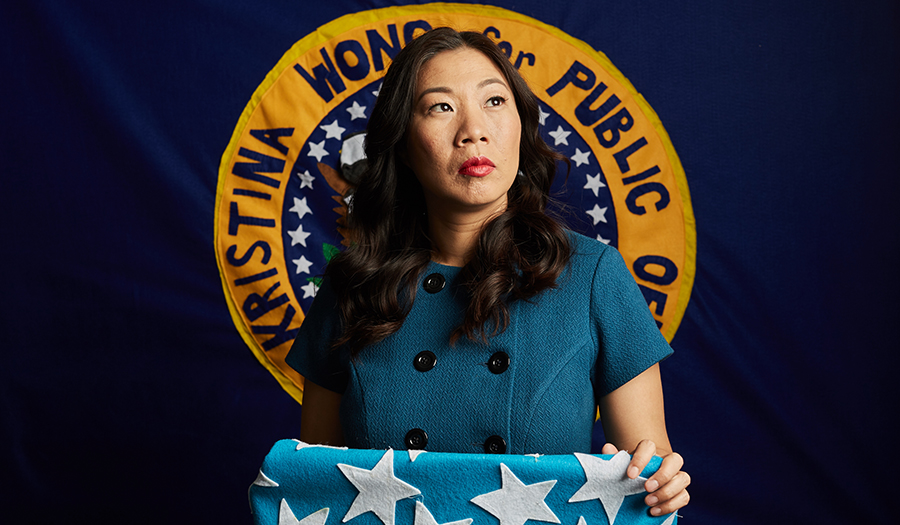 “So I made a rap album in Uganda, folks!”

This is one of the many strange things I heard Kristina Wong say during her virtual event, “Noontime Talk: Identity, Politics, Comedy, Activism” on Friday, Sept. 11, 2020. This discussion is one of three events Wong is leading during her virtual residency at the University’s Center for the Arts (CFA). Even though Wong’s phrases were off-beat, I found them hilarious and endearing, just like Wong herself.

Kristina Wong, a 42-year-old performer and creator from Los Angeles, California, is best known for her comedic approach to serious social and political issues. Wong came (virtually) to Wesleyan’s campus to have an open dialogue with faculty and students following her performance on Sept. 10, 2020, of “Kristina Wong for Public Office.” The one-woman performance staged a campy and absurd rally for its star, with hand-made American flags as her backdrop.

Right off the bat, I noticed Wong’s easy-going and fun energy. It made the Zoom room feel so alive, and almost let us forget that for the time being, we were just little squares on a screen. Throughout the whole call, Kristina would giggle, crack jokes, and laugh at herself when she made funny comments. At times, she had so many things to say that she jumped from one thought to another. Other times, she spoke in a more somber tone, especially when describing the “ugly years” of her life. But just by her voice, I could tell how important her artwork is to her and how excited she was to be sharing her experiences with the college community.

“During a time when civil liberties are being eroded on a daily basis, our nation is convulsing with protests over police brutality and systemic racism, and our healthcare system and federal response to the pandemic is in tatters, Wong’s voice is needed more than ever,” the CFA’s Associate Director of Programming and Performing Arts Fiona Coffey said.

Combining memoir and satire, Wong recounted the journey she took after her television pilot failed to be picked up: she took drugs, accidentally applied to run as a councilperson in her Koreatown neighborhood, and tied in the election. Her journey from ironic comedian to engaged politician working to rally against harmful immigration practices and voter suppression displays a stark inverse to the current president’s political awakening.

“I cannot stop crying….This is a real war and we are in a horror movie, but the monster is the deterioration of our democracy,” she said. “And unless we inject ourselves into the plot there’s never going to be a happy ever after, just an ending.”

The majority of Wong’s performances are based on real experiences she has had in her life. In her talk, Wong shared her experiences in a “cram school,” an accelerated program where students study for university entrance exams, which prompted her project, “Radical Cram School.” Throughout the discussion, she detailed several core moments throughout her life, while also mentioning the need for spontaneity in order to create new opportunities, especially within the arts.

“I think so much of choosing an artist’s life is living with enough delusion that you’re like, ‘Yeah! I can make this happen!’ and just running with it,” she said.

Since Wong discusses complex social issues in her shows, she expressed how at times she feels so desperate to jump into difficult situations and fix everything. But in doing so, she comes to the realization that what lies beneath the surface is often complicated.

“What is constantly revealed to me is like a kick into action, like a little not-so-white Savior, and I go ‘Okay, I’m going to fix it!’” she said. “And I never realize how deep it actually is. And that’s what usually the process of making a show reveals, [that] I think it’s going to be this great, fun show and then the more and more I research it, the more I realize, ‘Oh this is really layered and issued.’”

This statement resonated with me and got me thinking about my childhood. As someone invested in imagination, I would make up stories of grand adventures about saving the world and defeating the villain just like in the Disney movies I grew up watching, such as “Beauty and the Beast” and “Mulan.” But as I matured, I started to see that the world was full of cultures, communities, and customs far different from my own. Problems and oppression never exist on their own but are often tangled together. No one person can unscramble everything.

Her movement against individualism also reminded me of the importance of community, a message students should heed. At a place like Wesleyan, students have access to many different resources and people that they wouldn’t have on their own. It’s comforting to be able to lean on and support each other, especially in these trying times. Although we all have different experiences, we are all connected in trying to make this University the best environment it can be.

Wong definitely kept me hanging onto her every word. Something that particularly jumped out at me was her constant subtle acknowledgment that little things can grow, at times without any realization, into large, impactful movements or events.

One such example is her “Auntie’s Sewing Squad.” After Wong’s tour dates were cancelled due to the COVID-19 pandemic and after she had no income, she was at a loss for things to do. Wong explained how she learned about the shortage and desperate need of masks, and realized she had an essential skill: sewing. From that point on, she started sewing and donating masks to different hospitals in her area. She went on to tell us how slowly the small effort that she was making expanded. Before she knew it, she had women from different walks of life working together to not just help out hospitals, but also underprivileged communities predominantly consisting of people of color.

“We find ourselves doing active outreach to these communities that have no access to masks, and it literally feels like we are fixing structural racism from our sewing machines” she said warmly.

This struck a nerve with me. Sometimes it feels like all the problems in the world are clamoring for attention, and it’s overwhelming. But hearing what Wong had to say reiterated that these somewhat unconventional events, like the creation of the Auntie Sewing Squad, are taking steps in the right direction.

Assistant Professor of Theater Katie Pearl asked who the aunties were.

“For the most part, we’re professors, filmmakers, other artists, out of work stage managers, [and] actors who know how to sew. A lot of us are Women of Color, a lot of us [are] Asian American women,” Wong responded.

Towards the end of Wong’s story, she equated a mask with an offering, something that had never crossed my mind before. To me, giving an offering is like building a bridge with someone, something sacred and truly good. I can now see how the gift of a mask, in particular, may embody that sentiment.

“It has become our way of saying we want to keep you safe; we want to protect you, this is how we show that,” she said.

Wong is a person who derives inspiration from a conversation that she’s having with the person sitting opposite her at any given time, and her creative ideas are sparked by the direction in which the conversation goes.

I definitely identify with her: talking through my ideas with someone always helps sharpen my creative process. However, traditional theater directors aren’t always trained for Wong’s collaborative nature.

“I think so many directors would talk to me like, ‘Show me what you’ve written.’ I’m like ‘What I’ve written? I was hoping we could just chit chat and some sort of magic would happen, and I would repeat it on a stage,’” Wong said.

She later told us that throughout her career, she has come to embrace her process.

“I’ve learned that the process is to have accountable meetings, which are usually rehearsals with a director where I’m going to sit down and write five pages, or it is an impulse. Like ‘Have you ever noticed [blank]?’ and what that might look like as a performance piece.”

Overall, Wong’s self-confidence and her willingness to let us take a peek into her vulnerabilities are refreshing, and her ability to ask the difficult questions inspiring.

“What’s the point of art?” Wong challenged us. “Who wants to stop and watch a show in the middle of all this chaos? We’re in that moment right now like why pursue theater? Why pursue the arts right now?”

I believe the importance of performance art is that it can bring people together. Building strong connections with the people around us can empower us to collectively address the tough and complex issues within our communities. In asking these difficult questions, Wong encourages her audience not only to dig within ourselves to find the purpose of the arts, but to find that purpose through empathizing and creating with others, one show or one mask at a time.