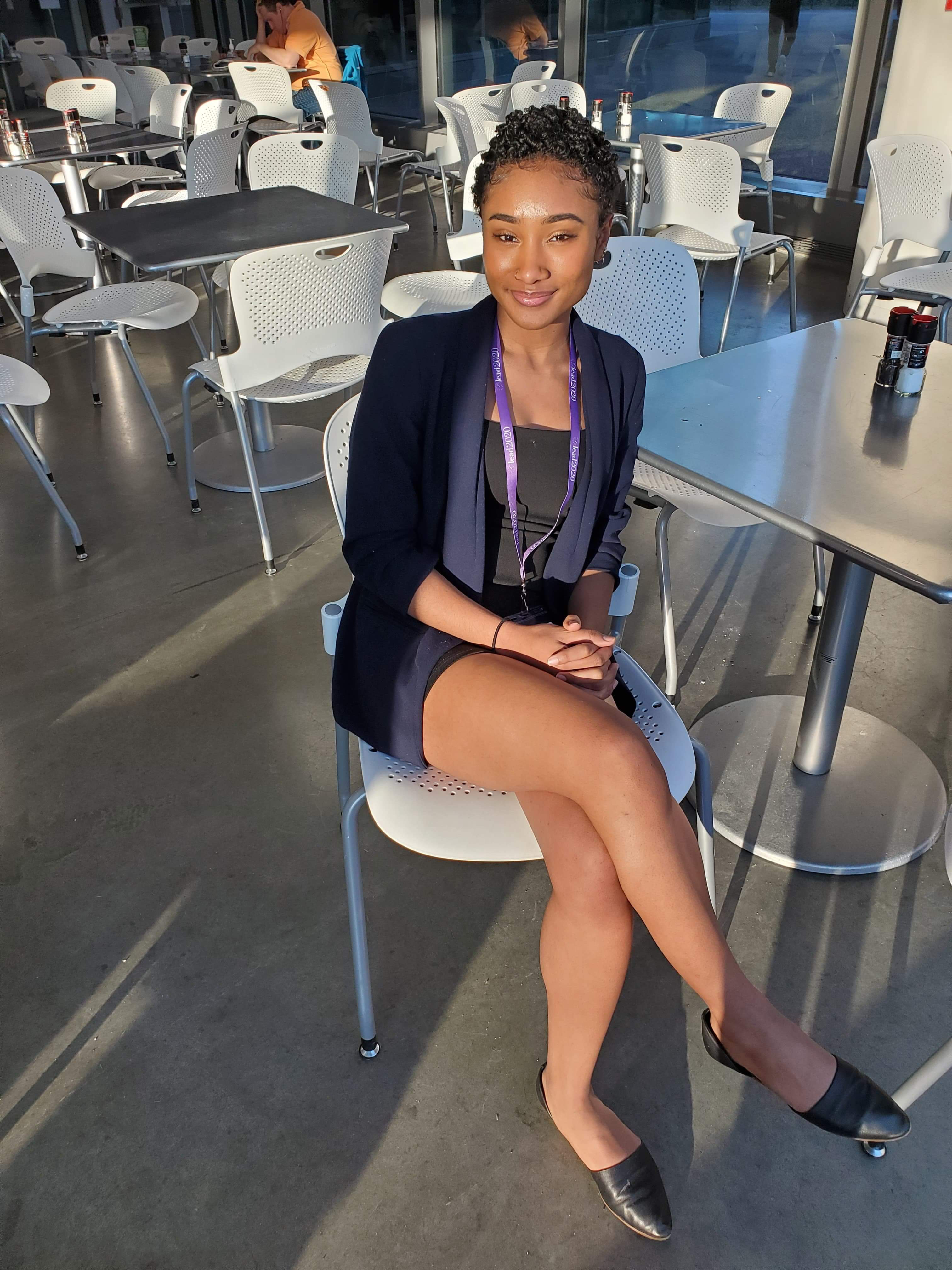 With her passion for social justice, Alice Swan ’21, a double major in government and the College of East Asian Studies (CEAS) and an African American Studies minor, has made the most out of her time at Wesleyan. From Ujamaa (Wesleyan’s Black Student Union), to MIX (Multiethnic Interracial X-Cultural) Club), to her participation in Xtacy (one of Wesleyan’s hip-hop dance groups), Swan continues to affirm her strong commitment to building community and creating supportive and healing spaces for students of color. The Argus Zoomed with Alice to discuss her time at Wesleyan and her plans for the future.

The Argus: How has your semester been so far? Are you on campus?

Alice Swan: It’s been pretty good so far. I’m not on campus, I’m remote…Overall, not bad.

A: Do you have any plans for senior year? Are you writing a thesis or anything?

AS: I’m writing a capstone essay for the CEAS department.

A: What’s your essay about?

AS: It’s about blackface in South Korea. So far.

A: How far along are you in the capstone project?

AS: I’m in the brainstorming phase. I changed my topic over the summer. I was originally thinking about doing Black entrepreneurialism in South Korea because there’s surprisingly a lot of Black-owned businesses in South Korea and whatnot. So I was going to look at that and try and look at the implications of having Black-owned businesses in a country that is largely homogenous. But with current events that happened over the summer, I decided to go into the direction of looking into blackface and racial discourse in Korea.

A: We know you’re a part of Ujamaa and you’re a communications manager and a board member. Could you talk a little bit about your involvement in that?

AS: Ujamaa is Wesleyan’s Black Student Union. It’s really a space for the exploration and celebration of Blackness and Black heritage and African ancestry. Ujamaa itself means “familyhood”…I think another name for a kind of African socialist philosophy, and so Ujamaa really is a space created for the community, going alongside its name. I think for me, Ujamaa just has been really that space where I can grow and it’s been a safe space not only for Black students on campus but students of color. [Ujamaa is] really trying to create that space where students of different backgrounds can get together and learn from each other and grow. Ujamaa has really been that space for me, and right now we’re working on the list of demands which is kind of gaining traction but also falling a little bit on deaf ears from the administration but that’s okay. Alongside that, one of the things that we have planned for the semester is a mental health series, or mental/physical health series…it’s primarily a space for Black students but I think any student could really attend. It’s to focus on deconstructing any norms we’ve internalized in childhood and also rethinking our relationships with other people. Like what does love look like, how can we share love with other people? Especially during this time, how can love translate to our relationships even when we’re not occupying the same space? That’s a lot of what we’re doing this semester in terms of trying to provide that sense of community for people who are on campus and off-campus.

A: Are those events going to be all virtual?

AS: It’s probably gonna be all virtual to be honest. We might be able to get funding for people to do things while they’re on campus. But I think it’s largely going to be virtual just because Black students aren’t all on campus. If we’re trying to support all Black students and expand to students of color, we have to support students who are in a tough spot right now and are remote. So that’s one of the reasons we decided to go completely remote for the semester, for the most part.

AS: I love dancing. I think Xtacy really created that space. One where I could learn from upperclassmen and create those relationships, but also one where I could explore my creativity. I’ve always been kind of a more classical dancer, so ballet and jazz and whatnot, so Xtacy was my first glimpse at an actual hip-hop dance or whatever. It was really a nice space. Alongside that, Burlesque was also a really beautiful space to be a part of.

A: What would you say has been your most meaningful contribution to the Wes community so far?

AS:  I think Ujaama to be honest. Just maintaining that space. I think it’s really hard for clubs to maintain institutional memory and so by being a part of Ujaama and sort of making sure that it not only remains a space for Black people, especially during this time but that it also is able to represent Black students in a way that at least tries to do us justice, I think that’s where I’ve sort of made my place.

A: Do you have a particular event at Ujaama that you like the most or a favorite memory there?

AS: That’s a good question. I think, I mean I have my favorite time of year and that’s during Black history month. It does sound weird, but I think when it comes to Ujaama, my favorite time is Black History Month. Usually, the itinerary for Black History Month is like 14 events and it really caters to the specificities [of] Black people…because one it is a space for just fun and celebration and whatnot, but also…because we have a kickoff meeting every year where students can give their feedback and whatnot and what they want to see. Being able to bring all of that to life is something that I really like to see. For example, we had an astrology event where we had an African astrologist come and do readings and talk about spiritual healing and things like that. We also had a Black love event where we had conversations about relationships and how we relate to one another and how we show solidarity…. We also had a speed dating, like a speed friending kind of thing, which was fun.

Especially this year, we had Fania Davis come in and talk about restorative justice, and I think that was honestly one of the most transformative moments of the year for me just because, especially right now, we are in this moment [where] a lot of people are recognizing that police brutality is a thing, and also that along with police brutality, other systems of policing, including the prison industrial complex, exist, and so how do we grapple with this idea of prisons and this very carceral mindset of punishing people when they do wrong rather than recognizing where the growth can happen. So I think Fania Davis did a really good job outlining, or at least giving me a starting point, [of] how I can really think about what prison abolition means in the long run and how through our interpersonal relationships, we can promote this restorative justice thinking and try to transform people instead of throw them away. And so I think that moment was really transformative for me.

A: Have your academic pursuits at Wes aligned with your passion for social justice?

AS: Actually, yes. I think not so much in the beginning of my Wes career because I was just taking government classes and I wanted to take Korean language just because, but I think there was a shift because I started learning more about authoritarian governments, how they manifest, and what they look like. And then recognizing some of Donald Trump’s patterns and also finding those parallels within American democracy. It is kind of aligned in a sense. I’ve always been really passionate about people’s rights and trying to create spaces where people can feel like they’re free to express themselves and free to engage in any cultural activities they want to do. I minor in African American Studies, so [I’m] taking more racial and ethnic politics courses and race and sex in America. All these different things really align with my passions for maybe what I want to do when I get out of college. Yeah, we’ll see [laughter.] So, yes and no.

A: Do you have any plans for after you graduate, any idea of what you may be doing?

AS: We’ll see. I’m less inclined to go into corporate though that could be where I’m heading, just because of finances and stuff. But I think that I would really like to go into nonprofit work. I was considering…or, I have a lot of things on my mind [laughter.] Or being a professor, if not a professor maybe a teacher, a high school teacher. A space where I would be able to teach people and also really try to decolonize how we consider education and [how we] interact with people. I think that’s where I would like to be, we’ll see [laughter].

A: Do you have a favorite memory at Wesleyan?

AS: I have so many wonderful memories at Wesleyan, because I was afforded the opportunity to connect with so many amazing people on a personal level, so I’m listing two amazing memories in no particular order of importance. My first favorite memory is staying out all night before graduation in 2019. It was senior week, so I was living at X House, and my friends and I were walking from a party on Pine. Being up at 5 a.m. walking with my friends across Foss, hearing the birds chirping, and seeing the sunrise together was such a beautiful moment.

My other favorite memory is my friends sleeping over in my dorm room freshman year. I was lucky enough to get a single my first year, and a majority of my friends were placed in either doubles or triples. I had an air mattress, so when my friends felt like they needed a break from their roommates or classes we would stay up late at night and have intimate conversations until we fell asleep. Both of these memories (and more) hold such special parts in my heart.

A: Do you have any advice for freshmen this year, navigating the start of college in a pandemic?

Mengmeng Gibbs can be reached at mgibbs@wesleyan.edu.

Natalia Ruszkowski can be reached at nruszkowski@wesleyan.edu.