For many students, high school and college alike, it’s probably hard to recall exactly what was going on in mid-May of 2020. If you had the privilege of a safe home and internet access, the world became virtual, small, contained, and repetitive in the face of the looming threat of the novel coronavirus disease (COVID-19) pandemic. By the latter part of the Spring, each day had begun to feel much the same. 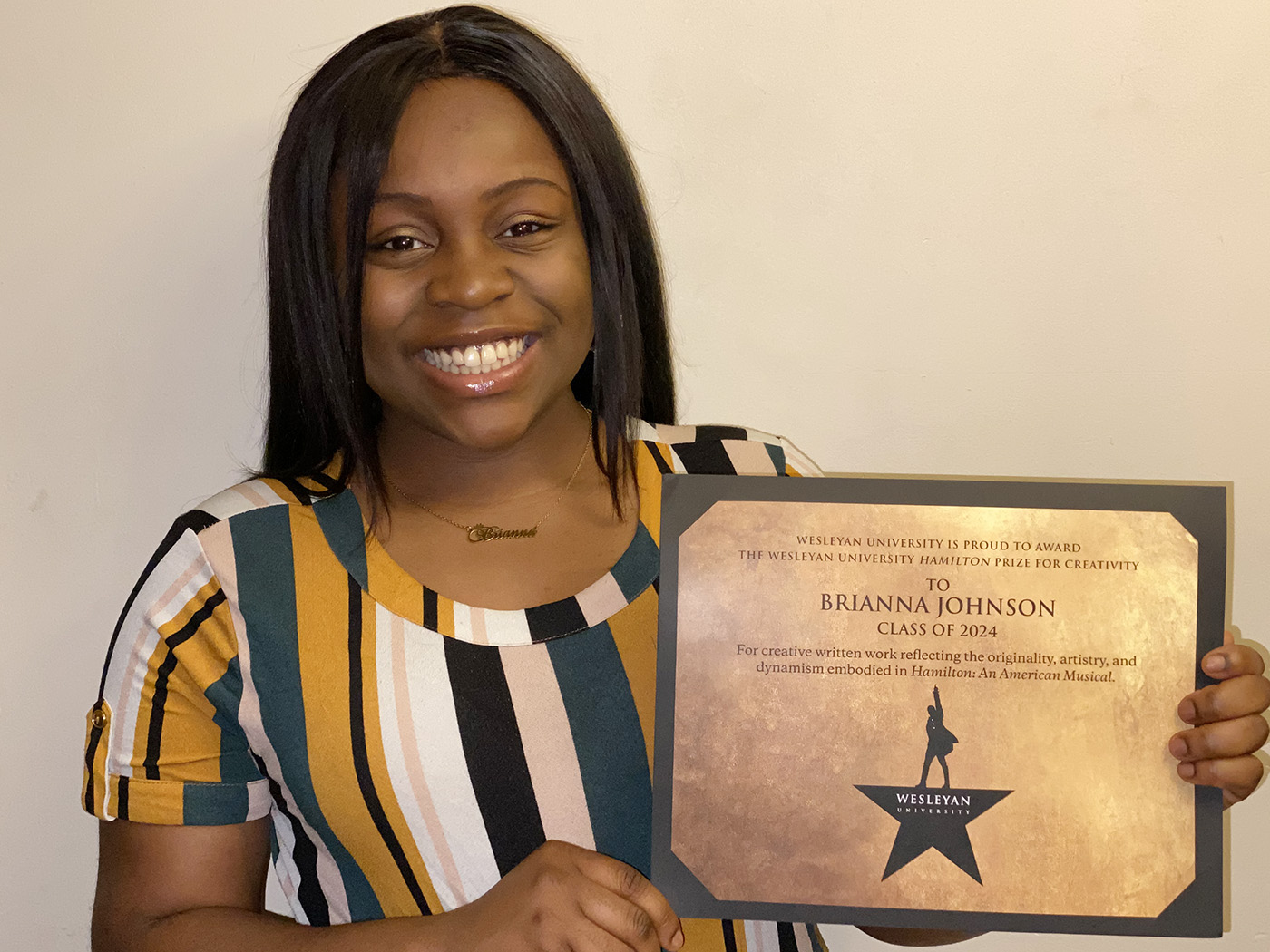 But Brianna Johnson ’24 remembers mid-May with clarity, because one day in particular stood out. She was expecting a phone call, and, as phone calls so often do, it came at an especially inconvenient time.

“I had shampoo in my eyes and all of this other nonsense, and I had my phone play music and my phone just stops playing music, and that means I got a call!” Johnson said. “So, I’m like, wait, and I’m rushing to grab a towel to rub the shampoo out of my eyes and I see “Connecticut” and I’m like, I don’t know this number, and I was like, oh wait, Connecticut, that’s Wesleyan!”

Calling from Connecticut was University President Michael Roth ’78, who alerted Johnson to the fact that she was the winner of the 2020 Hamilton Prize for Creativity.

“I didn’t scream right away, I kinda just like, froze, and I was just like, ‘are you serious?’,” Johnson said. “And then I just grabbed my towel, the water’s still running, and I run upstairs and I put the phone on speaker and I’m in my mom and dad’s room . . .  it was just a crazy moment.”

Johnson’s grand prize-winning piece was a mixtape titled “Tell ‘Em The Truth” which consists of three songs: “Dreams to Reality,” “These Chains,” and “Damages of Duality.” Although Johnson completed her mixtape last year, her musical process started when she was in ninth grade. She explained that she had just moved to a new high school and was feeling pressure from both adjusting to her environment in a primarily white school and witnessing acts of police brutality and racial injustices going on around her in the U.S.

“I was going home and hearing the news of Michael Brown and the aftermath of Trayvon Martin and things like that so, it was all a lot of pressure that I just decided to release through music, which is not something that I would naturally do, but I just wrote the songs because, yeah, I had to get my anger out somehow,” Johnson said.

Johnson said she found inspiration in the cover of the book “Chains,” a novel by Laurie Halse Anderson. The cover depicts a Black girl holding up bound arms.

“I first thought like, ‘Okay, what do you do with chains?’ And like, not even ‘What do you do’ but ‘What would Black people be doing with chains?’” Johnson said. “And I was like, ‘Breaking them.’”

The same day that Johnson found out her work had earned her a full scholarship to Wesleyan, two other writers received exciting news as well. Luka Netzel ’24 and Chiara Kaufman ’24 both earned honorable mentions for the Hamilton prize: Netzel for his script to the opening act of a musical and Kaufman for her work in flash fiction (a style of fiction where works are typically shorter than a short story). 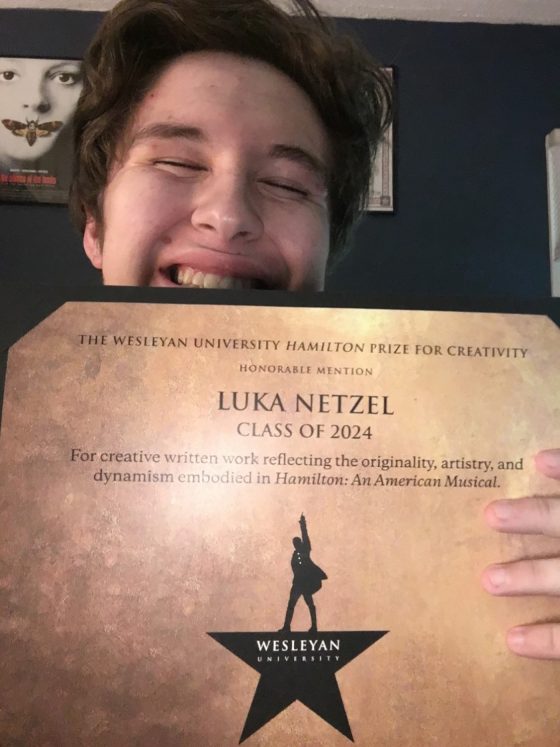 Netzel’s piece, which he titled “Heartful Dodgers,” tells the story of two brothers trying to dodge the Vietnam War draft by joining an Amish community in order to claim that they are pacifists. The plot of Netzel’s submission revolves around the brothers feigning Amish identities in order to blend in with other community members, some of whom are rather suspicious of the protagonists.

Netzel explained that he made the decision to write a piece of musical theater because that was the submission category that most appealed to him.

Netzel said he intends to eventually finish his musical, but added that he could use some help in the music department.

“I just kind of just winged the lyrics and like, made a tune in my head and just thought, ‘Oh yeah, that sounds good.’” Netzel said. “So I have songs, but I don’t actually have any actual [composition], for it, so I really am hoping to meet someone here who knows how music works and then be able to finish that and then finish the other act.”

While Netzel chose to submit to the open-ended musical theater category for the Hamilton Prize, Kaufman said she knew right away that her submission would be a different genre: fiction. 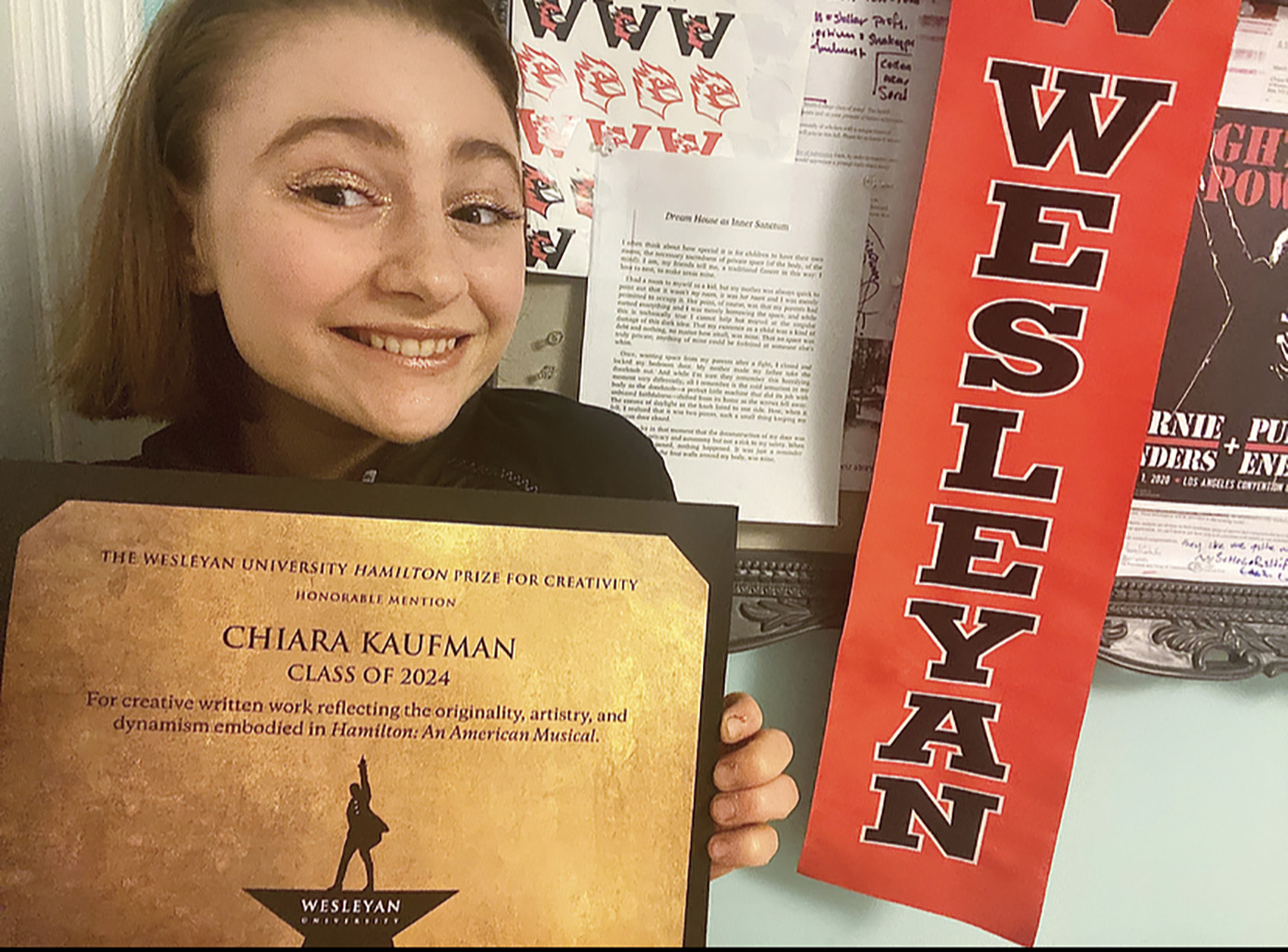 Kaufman explained that her flash-fiction piece, “The Maid,” one of two short stories that she submitted, is written completely in a stream of consciousness style.

“I wrote it all in one sitting which is very unusual for me, because I’m a very very slow writer,” Kaufman said. “It’s in the style of stream of consciousness meaning that it’s really, it is all first person, it is actually all constructed in one sentence. So it’s not really, there’s not as much of a plot as it is this woman’s particular thoughts.”

The central character of Kaufman’s piece is a mother with young children. The mother’s thoughts reveal her fears about motherhood, her relationship with her husband, and concern with the fact that the maid that she has hired is becoming more of a mother figure for her children than she is.

Both Johnson and Kaufman said that they have found confidence and voice through their creative work.

“It just showed me how important Black voices are and even if you think you’re not making a statement or even if you like, think nobody is listening to you because you’re a marginalized group or you’re not the majority in a space, your voice still matters,” Johnson said. “I think that’s one of the biggest lessons I taught myself on accident by doing this, is that my voice carries some weight.”

Johnson added that she has carried this lesson with her into all different settings.

“It’s really helpful in any type of space, especially a space where I might automatically silence myself because of my own internalizations of like, [questioning] if I belong there, it really gave me more of a confidence like standpoint to show myself like, I’m worth something and my voice matters,” she said

Kaufman also explained that the award for winning helped her feel more confident about her role on campus.

“I think it really gave me confidence going into Wesleyan, confidence that I belong as a writer and as a student.”

Kaufman said that she is settling in well and has made many friends, including grand prize winner Johnson. The two writers got to know each other over the summer in their first year seminar, and Johnson explained that they recently saw each other in person for the first time when Johnson was on her way to get her nose swabbed for a COVID-19 test.

When asked about what advice they might have for other aspiring writers and creative people, the prize winners had a few different suggestions.

Netzel focused on not being too worried about how your writing is received.

“As soon as you’re done with your first piece, and, you know, people start telling you it’s good and stuff  . . .  you realize that like, ‘Oh, there’s a lot more I could have done’ and then you just get into that, and it’s just, you keep going and you keep getting better and it’s important, just like, let yourself fail.”

Johnson had similar advice about maintaining authenticity in creative work.

“Just go for it like, whatever happens happens, whatever comes out of it comes out of it,” Johnson said. “Just do it. If it’s something that’s in you, don’t hold it in you for too long or you’re going to lose it.”

Sarah Timbie can be reached at stimbie@wesleyan.edu.