There are 320 confirmed cases of the novel coronavirus disease (COVID-19) in Middletown, according to Mayor Ben Florsheim ’14. The city has also seen a total of 39 COVID-19 related fatalities. As of April 30, Middlesex County had 657 total confirmed COVID-19 cases, with 79 COVID-19 related deaths and 42 hospitalized patients.

Middlesex Health announced on April 28 that they would be joining the Mayo Clinic’s convalescent plasma program with the hope that it can be used to treat patients with COVID-19.

“The initiative is using convalescent plasma from patients who have fully recovered from COVID-19 with the hope that antibodies in the plasma can help hospitalized patients who have COVID-19,” the press release reads.

The total number of hospitalizations statewide decreased for the eighth day in a row from 1,691 on April 29 to 1,650 on April 30.

As hospitalizations have slowly begun to decrease, Governor Ned Lamont has started to look at a possible timeline for reopening Connecticut.

“This is really important because as you know, the White House Task Force has said 14 days of declining hospitalization is an indicator that you’re able to move into a space where perhaps you can start thinking about opening some things up on a limited basis,” Lamont said on April 27.  “So you’ll see based on this, it’s not a straight line, but we’re about seven days into this down slope, and that means another seven to 10 days, I think we can start making some announcements about places that we can go and places that can be opened.”

“I think it’s clear that what we’ve done in terms of social distancing has had a dramatic effect on disease transmission,” Cartter said on April 28. “The trends are encouraging, but the number of cases that we still have are far too many, and we should not think that we are through this at this point in time. If you look at the number of hospitalizations that are continuing to happen, the number of deaths that are continuing to happen—the New York City, Connecticut, New Jersey tri-state outbreak is still some of the largest COVID activity in the United States, and we still have a ways to go.”

At his April 30 briefing, Lamont discussed criteria presented to him by the Reopen Connecticut Advisory Board to begin a phased-in approach to reopening the state. The criteria for Connecticut’s initial reopening include a 14-day decline in hospitalizations, increased testing, and sufficient contact tracing capacity. 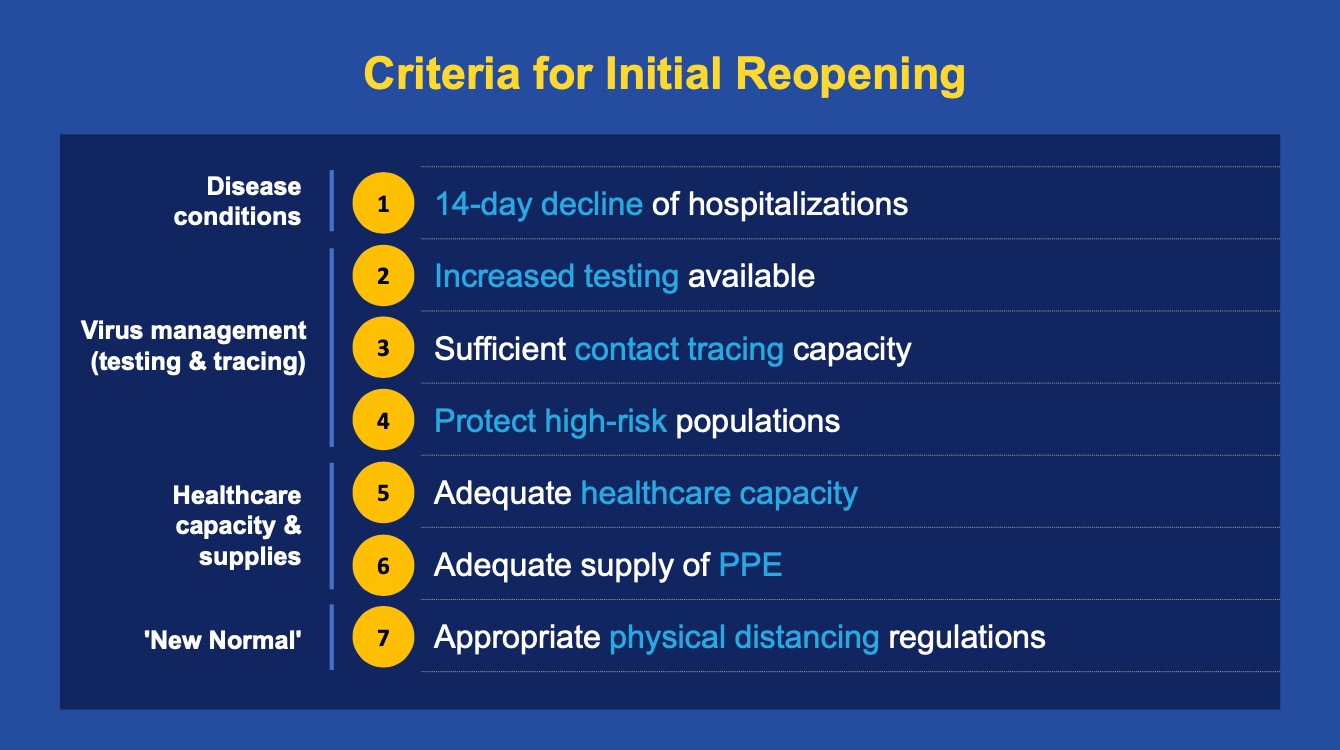 Lamont noted on April 28 that the state is continuing to see the daily change in statewide hospitalizations decrease.

“That’s the trend line that gives us a green light when we think we can start thinking about reopening some of the sectors of the economy that are not open now,” Lamont said. “We’re about a week into that and a week from now we’ll give you a stronger indication.”

In addition, Lamont said on April 30 that if the state was able to meet the reopening criteria, certain businesses would be allowed to reopen on May 20, which is when his current closures and social distancing guidelines are set to expire. Businesses in this group include restaurants (outdoor only, with no bar areas), personal services (hair and nail only), and university research programs, among other industries. 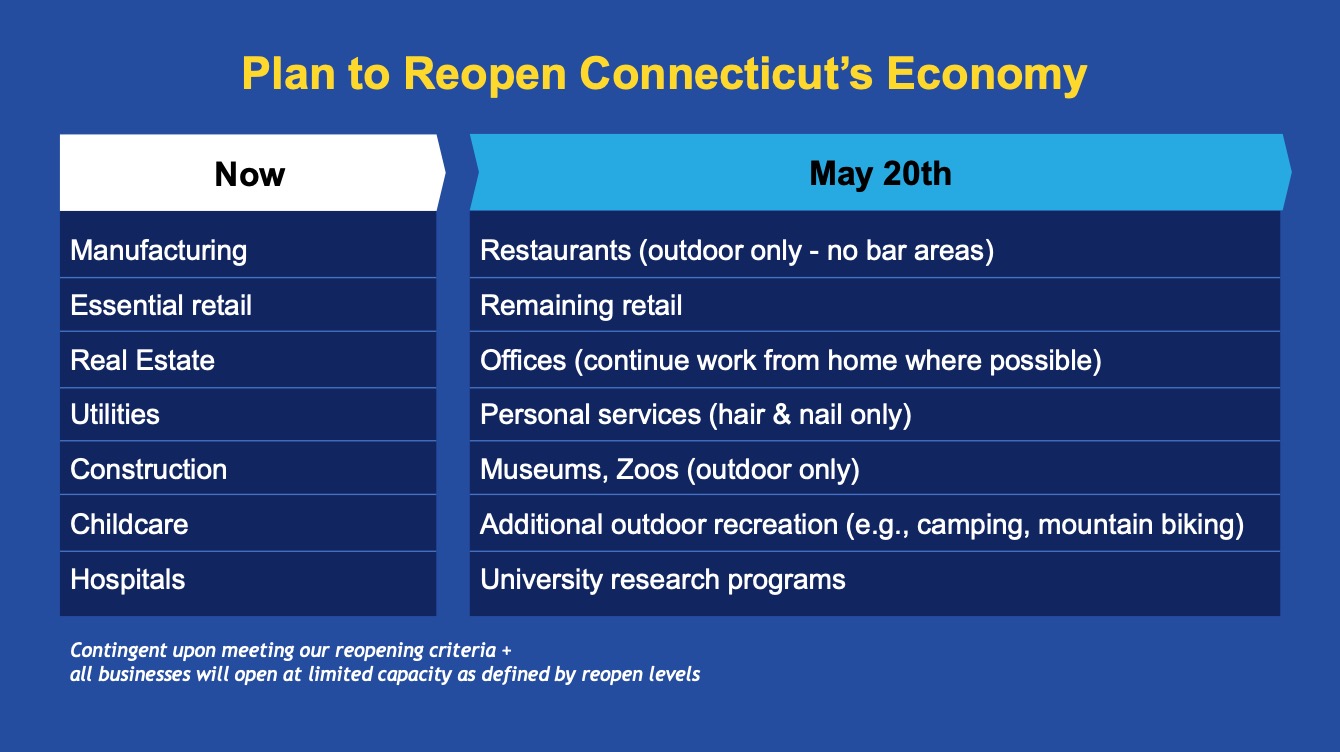 “The City of Middletown is convening a local reopening working group to provide detailed local guidance to establishments in the [categories allowed to reopen on May 20],” Florsheim wrote on Facebook.

The state announced on Wednesday, April 29 that it was urging local governments and community partners to establish long-term recovery committees to coordinate recovery efforts for the pandemic at the state and local levels.

Lt. Governor Susan Bysiewicz explained what would be expected of local recovery committees at Lamont’s briefing that day.

Bysiewicz emphasized the importance of local and state cooperation for Connecticut’s recovery from the pandemic.

“Those groups will work with our state long-term recovery partners, their legislators, and our federal partners to maximize funding, to make sure that community needs are met, and to recognize what the local conditions are,” Bysiewicz said. “Because what we know about our state is that each part of our beautiful state is different—Eastern Connecticut is different from Litchfield County is different from some of our urban areas. And we think this is going to be a very effective way to bring our economy back on the other side of this and to bring it back in a very strong and effective and inclusive way.”

At Lamont’s briefing on Tuesday, April 28, state officials addressed the state’s contact tracing plan, ContaCT, which is expected to be rolled out statewide by the third week of May. The system, which the state is developing in partnership with Microsoft, is intended to coordinate contact tracing across Connecticut’s 64 local health departments and the Department of Public Health (DPH).

DPH Epidemiologist & Syndromic Surveillance Coordinator Kristen Soto spoke at the briefing about the purpose of the plan.

“Contact tracing is not something that’s new, and this is something that we routinely use for other infectious diseases, including measles,” Soto said. “We’re looking to adapt the strategy for COVID in order to help stop the spread of infection in our communities and prevent small clusters or individual cases from turning into larger community outbreaks. So without contact tracing, people might spread COVID-19 unknowingly.”

The system will be pilot tested with 20 of the state’s local health departments before being introduced to the entire state, according to Soto. Lamont said that although participation in contact tracing is voluntary, residents are encouraged to cooperate.

“They have an opportunity to opt in or say no but we try and encourage them, if they care about the friends and people they’ve been in contact with, on a voluntary basis, to let us know who those people might be,” Lamont said. “So nothing is mandatory about this process, but of course, the more people that participate, the more effective it is.”

Cartter explained that although states in the New England area will be using different contact tracing systems, information can be shared between state health departments.

“Massachusetts, Rhode Island, New York, New Jersey—we’ve worked together at the state level for years, and we actually have a means to communicate about cases and about contacts,” Cartter said. “Even though we probably will not have the same technological systems…what we’ll be able to do is to share electronic files that can be imported into each others’ systems that would contain information related to residents of those states. Obviously if we learn about contacts in Massachusetts, we’d be sharing that information with the Massachusetts State Health Department, and that’s the way it would also work for Rhode Island and New York and New Jersey.”

Lamont highlighted the multistate component of ContaCT and explained why Connecticut is beginning to move forward with its plan.

“This is what we’re working on a regional basis with Governor Cuomo and the others,” Lamont said. “And we’re beginning to roll that out now in a serious way because that’s the most effective thing we can do to reduce the spread, limit the spread and get you back to work.”

Even as the state begins to think about the process of reopening, Lamont was cautious to speak to what residents should expect in the summer.

“I’m going to give them the best guidance I can as soon as I can, but it’s too soon to say what’s going to happen in July and August,” he said on April 29.