Middletown now has 18 confirmed cases of the novel coronavirus disease (COVID-19), while the number of total cases in Middlesex County has risen to 50. One of those patients is currently hospitalized. The county has also seen one death from COVID-19.

However, the number of actual cases is likely significantly higher than the number of confirmed cases, as State Epidemiologist Dr. Matthew Cartter explained at a press briefing on Wednesday, March 25.

“The number of cases that we see, the ones that are confirmed to be positive for COVID-19, are just the tip of the iceberg,” Cartter said. “And there are many more people in Connecticut that are infected—at this point, thousands—than what we have in terms of confirmed cases. I’ve said before that we don’t have a lot to draw on.” 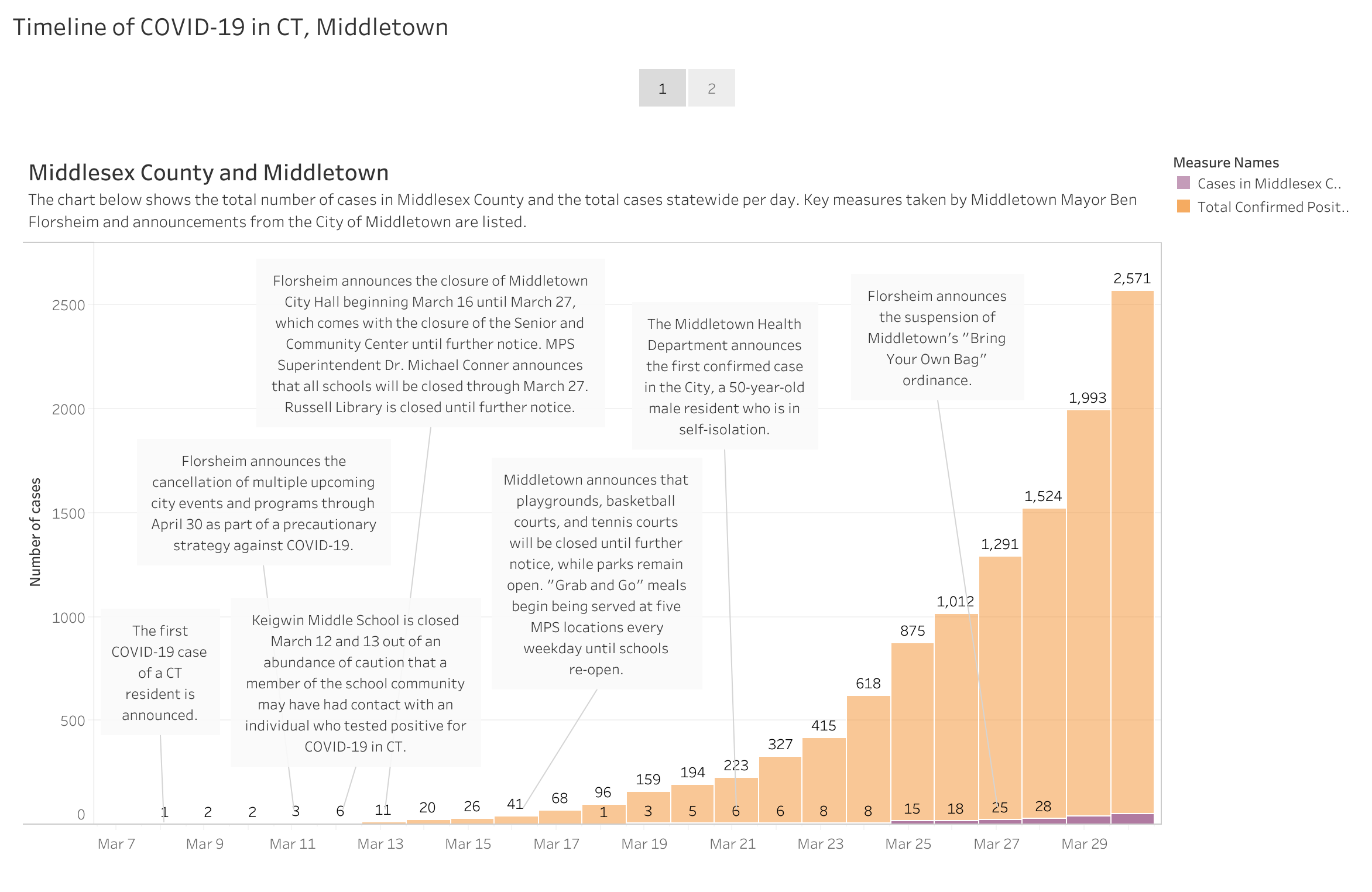 “We have not been hit particularly hard when it comes to the diagnosed cases,” Florsheim said. “We think that there are more cases than that in the City of Middletown, but we haven’t been particularly hard-hit so far and we’re grateful for that and it doesn’t happen by accident. And at the same time we are preparing over the next few weeks for a really exponential increase in the number of diagnoses that we have in our state and most likely in our city.”

Alongside the statewide request for PPE donations, Middlesex Health is also currently accepting donations of PPE.

In addition to the CHC’s on-site testing, Middlesex Health began evaluating patients with respiratory symptoms and testing for COVID-19 outside of their Emergency Department entrance on March 21.

The Connecticut Department of Public Health is also preparing to deploy a mobile field hospital outside of Middlesex Hospital, according to a press release from Lamont.

As of Monday, March 30, there were 2,571 confirmed COVID-19 cases and 36 deaths in Connecticut. 517 patients with COVID-19 are currently hospitalized. According to the New York Times, as of March 30, Connecticut had the 13th highest number of cases in the US.

Because Connecticut, New Jersey, and New York are among the worst-hit states in the country, on Saturday, March 28, President Trump suggested that he may implement a federal quarantine for the three states. Instead, Trump announced later that day that he had asked the Centers for Disease Control and Prevention (CDC) to issue a travel advisory for the tri-state area.

“Due to extensive community transmission of COVID-19 in the area, CDC urges residents of New York, New Jersey, and Connecticut to refrain from non-essential domestic travel for 14 days effective immediately,” a CDC press release reads. “This Domestic Travel Advisory does not apply to employees of critical infrastructure industries, including but not limited to trucking, public health professionals, financial services, and food supply.”

Prior to the CDC travel advisory, Lamont issued a  “Stay Safe, Stay Home” executive order, which took effect at 8 p.m. on Monday, March 23 and directed workers at all non-essential businesses and nonprofits to work from home. 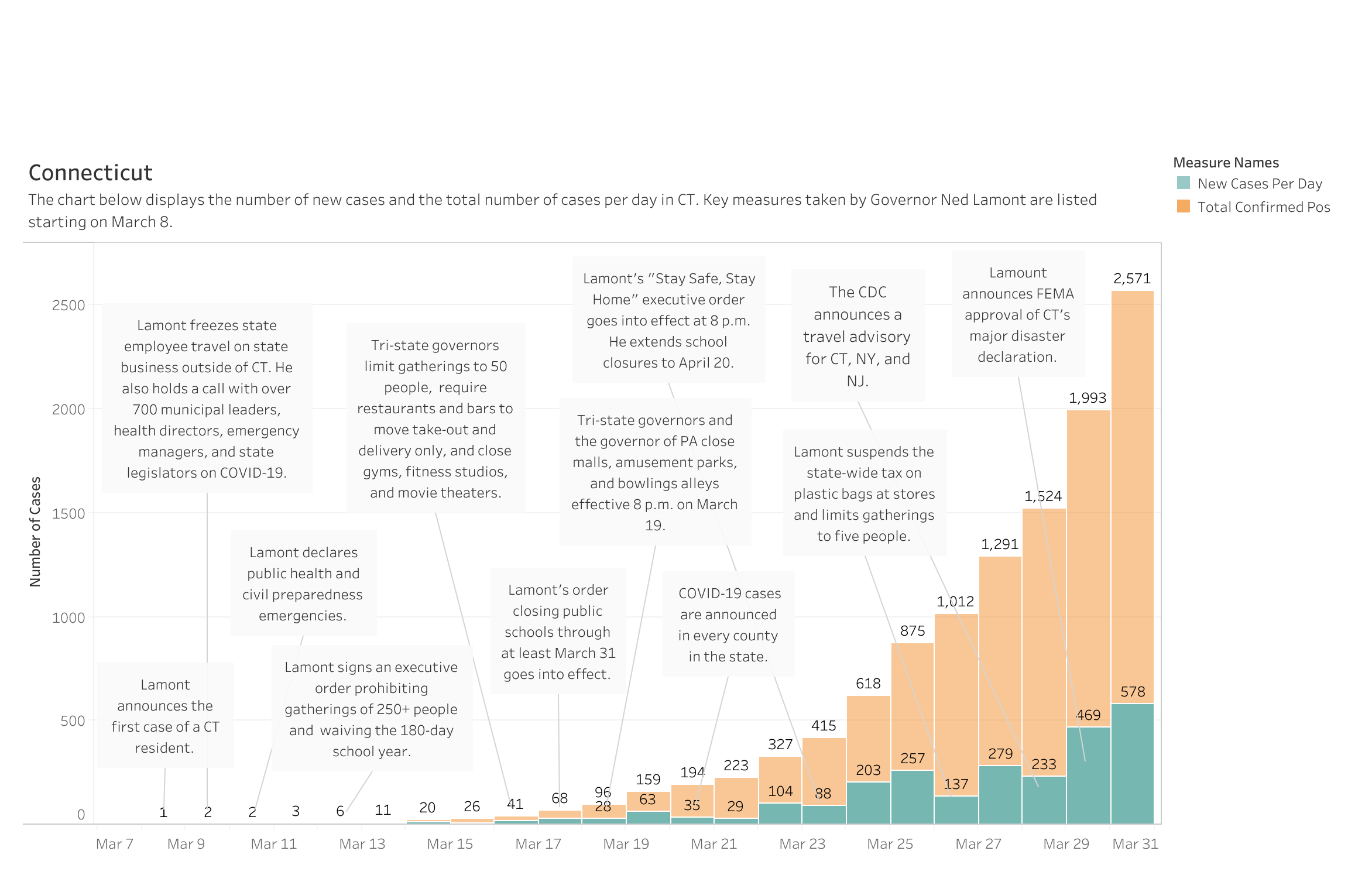 Lamont’s executive order on Thursday, March 26 limited social and recreational gatherings to no more than five people through at least April 30 and waived all school testing requirements for the rest of the school year. It also suspended the statewide tax on single-use plastic bags at stores.

“This is a temporary measure to make life a little easier during this very difficult time,” Middletown Recycling Coordinator Kim O’Rourke wrote in an email. “It is not an allowance for stores to use plastic check out bags. No Middletown stores should be using plastic bags.  The problems with plastic bags have not gone away because of the pandemic and all Middletown stores are set up with paper bags.”

On Thursday, March 26, Lamont announced the launch of the Connecticut Bridge Recovery Loan Program, which would offer Connecticut small businesses and nonprofits one-year, no-interest loans up to $75,000 through the Department of Economic and Community Development (DECD). However, the DECD announced the next day that it had paused taking applications for the first round of funding after receiving over 4,000 applications in the first 24 hours.

Lamont also submitted a request on Thursday, March 26 to the Federal Emergency Management Agency (FEMA) for a federal major disaster declaration, requesting that President Trump declare a major disaster for all eight state counties. He announced on Sunday morning that FEMA had approved the request for public assistance, which means state agencies and municipalities impacted by COVID-19 will be reimbursed for 75% of costs associated with response measures.

“I am grateful that the federal government is recognizing the severity of this pandemic in Connecticut and the impact it is having on the health and safety of the people of our state. It is an important step in providing critical aid in our communities,” Governor Lamont said in a press release.

“I don’t think it will surprise anybody to hear that after closing City Hall for the last two weeks, after closing our public-facing buildings, the senior center, the library, for the past couple of weeks, we are extending that closure for the next two weeks,” Florsheim said. “The reason for the two week timeframe is that we are working with our employees and working with our City Hall staff and human resources and the other folks who are providing these services, essential and remote, to try to get through this on a chunk by chunk basis, time-wise. And so, we’re taking the next two weeks and approaching it the same way that we did for the last two weeks, which is we’re going to wait and see what happens.”

Additionally, Florsheim addressed uncertainty around how long the closure of schools would last after Lamont extended the statewide cancellation to Monday, April 20 on Monday, March 23. The following day, Lamont told WCBS 880 that schools would likely remain closed until the fall.

“We were all doing this on sort of a patchwork basis a couple of weeks ago: Middletown was sort of making its decisions about schools independently from Meriden and Cromwell and everywhere else, but we are now under state guidelines,” Florsheim said in his Facebook video. “I think that we are all waiting, sort of day by day, to receive new information and new guidelines and new guidance from the experts about what the best steps we can take to prevent the spread of COVID-19 are…. We’re prepared with e-learning for the rest of the year and we’re prepared with e-learning for as long as we need to be out. But right now the guidelines that we’re receiving and the closure that has been issued is through April 20.”