A Recap of the NHL Trade Deadline 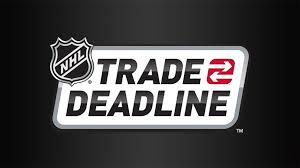 Last Monday was probably one of the most important sports days on the calendar that almost no one talks about: the NHL trade deadline. Unlike here in the United States, trade deadline day is treated as a national holiday in Canada, with both major Canadian sports networks (TSN and Sportsnet) having 8–10 hour shows that spend the whole day breaking down trades. The deadline as a whole usually brings a lot of excitement; some teams try to shore up their rosters to make runs for the playoffs, while others try to rebuild by trading players for draft picks. This year was no different, so here are my three takeaways from this year’s deadline.

The Arms Race in the East

This year, the main storyline of the deadline for me was the arms race in the Eastern Conference. Three of the four main contenders (Pittsburgh, Washington, and Tampa) added pieces to their roster that could put them over the top in what looks like a tough playoff fight. Right now, the Penguins, Capitals, and Lightning are all looking up at the Boston Bruins, who have been an offensive juggernaut all year. As a result, the three other teams made moves to upgrade their lineups offensively, hoping that the additional scoring punch will give them a better shot at advancing to the Stanley Cup Final.

Out of these three teams, the Penguins probably made the biggest move, adding Jason Zucker from the Minnesota Wild back on Feb. 10th. Zucker has had a superb last couple of years with the Wild, scoring a career-high 33 goals during the 2017-18 season. Zucker, paired with stars Sidney Crosby and Evgeni Malkin, should improve the Penguins offense to the level where it can compete in what is an offensively stout conference.

Similarly, the Lightning made moves to bolster their offense. Tampa Bay traded for Blake Coleman, formerly of the New Jersey Devils, who has been having a superb year with 21 goals in 57 games. This move looms even larger now with the news that Tampa Bay’s captain and offensive leader, Steven Stamkos, will be out with an injury for the next 4–6 weeks. In all likelihood, Coleman will be called upon even more to provide the same offensive firepower he’s shown in New Jersey this season.

Lastly, the Capitals, even with players such as Alex Ovechkin and Nicklas Backstrom, clearly felt the need to improve their offense, as they added forward Ilya Kovalchuk. Kovalchuk had struggled with the Los Angeles Kings last season after returning from the Russian Kontinental Hockey League. However, he has finally been showing some signs of life offensively with the Canadiens this season. Kovalchuk had 9 goals and 14 assists on what has been a bad team in Montreal, so it will be interesting to see what he can do with a great team like the Caps. All in all, it will be interesting to see who comes out of the East out of these four teams—I think it will be one of these four—and having these high powered offenses will make the playoffs a fun watch.

Rangers Starting to Build a Contender

My second takeaway from the trade deadline is the decision by the New York Rangers to hold on to talented players such as Chris Kreider, who many people believed was the biggest player on the market due to his offensive firepower. Kreider has scored 24 goals this year after scoring a career-high 28 last year. However, after two-plus years of trading players for draft picks and building for the future, the Rangers finally decided to build for now by committing seven years to a player in Kreider that has been a force for them for many years. It is the right time for them to do this, as they finally have the pieces to compete in the next one or two years. Their signing of Artemi Panarin has paid off in a big way, as he has added a lot to an offense that already included Kreider, Pavel Buchnevich, and Mika Zibanejad, and they seem to have found their goalie of the future in Igor Shesterkin, who has only lost one game in his 10 starts so far. Another star player for them this year has been defenseman Adam Fox, who has been superb on both ends of the ice in his rookie year. He is well on his way to being part of the team’s top defensive pairing. With the talent they have across their roster and their decision to keep Kreider, I believe the Rangers are on their way back to being playoff and Cup contenders in the near future.

Even though most of the focus has been on the East and what the top teams have done, teams in the Western Conference have also made critical moves to improve their rosters in the home stretch of the season. The team that made the biggest move was the Vancouver Canucks, acquiring Tyler Toffoli from the Los Angeles Kings. Vancouver has been one of the most surprising teams this season, as they have played better than many expected. They have gotten great goaltending as well as huge offensive contributions from players such as Elias Pettersson and J.T. Miller, both tied for the team lead with 26 goals this year. Adding Toffoli, who was a critical piece on the Kings’ Stanley Cup-winning team in 2014 and has 21 goals so far this year (4 of them with the Canucks), will further bolster their offensive lineup as they try to make the playoffs out of a tough Pacific Division.

Vancouver was not the only team in the Pacific who improved their roster for the playoff push, as both Las Vegas (adding goaltending depth behind Marc-Andre Fleury in Robin Lehner) and Edmonton (acquiring more speed with Andreas Athanasiou, as well as obtaining additional depth on the blueline in Mike Green) also made adjustments to bolster their star-powered rosters. Right now, the top four teams in the Pacific are separated by a total of only six points, so it will be an exciting race to see who makes it to the playoffs out of this division.