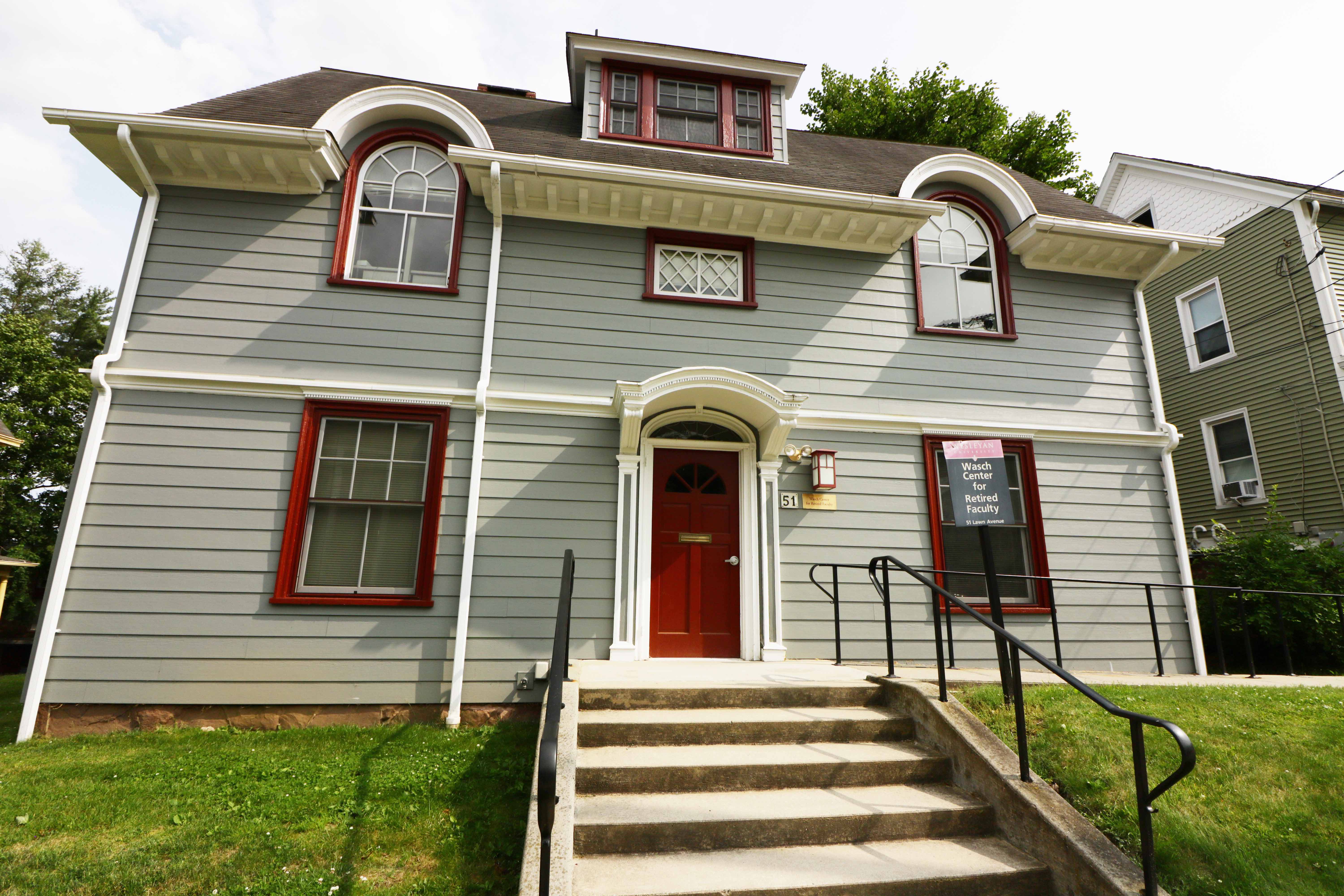 Located on Lawn Avenue, the Wasch Center for Retired Faculty blends in seamlessly with the program houses and residences that surround it. The house’s blue paint and big windows invite you in, and, sure enough, just beyond the entrance is a comfortable living room with a couch, armchairs, and copies of The New York Times sprawled across the coffee table.

The Wasch Center is charming and welcoming by design. Established in 2004 by the contributions of Susan B. and William K. Wasch, the Center is a home for retired faculty who would like to continue to pursue their academic interests. The bottom floor consists of an information desk along with the Hallowell Foyer, the Creeger Room, the Barber Room, and the Butterfield Room. Upstairs on the second and third floors are cozy, well-lit offices for professors who are no longer employed by the University.

Wasch Center Director Emeritus Karl Scheibe said that he collaborated with Bill Wasch to create the concept for the Center in 2003, when he was beginning to think about the end of his career.

After these early meetings of retired faculty and a few discussions between Scheibe and Wasch over friendly squash matches and pizza, the idea for the creation of the Center was born, modeled largely on Yale’s existing Henry Koerner Center for Emeritus Faculty. Due to Wasch’s significant financial contribution, Scheibe said that he was able to convince former President Doug Bennett ’59 to support the establishment of the Center after just one short meeting.

Soon after its founding, the Wasch Center began to establish itself as a home for continued academic inquiry. Though the Center was initially headed by Scheibe, in 2016, Professors David Beveridge and Alex Dupuy took over as its co-directors. Beveridge explained the mission of the Wasch Center to facilitate the continued education of faculty members.

“The mission of the Wasch Center is the support of continuing scholarship of faculty after retirement. Scholarship is an essential element of the career of all faculty members, and some continue their scholarly work after retirement, writing books and new research articles,” Beveridge said. “The Wasch Center is a locus for that vital activity, as well as a seminar series and publication parties for new books when they are published.”

Dupuy said that the co-director role of the Wasch Center is different from other leadership roles within the University.

“As co-directors, we are not like department chairs,” Dupuy said. “We do not have majors who need to be shepherded through our programs, and we do not participate in hiring or promoting faculty colleagues. Our main role at the Center is to oversee its operating budget and to work with our colleagues to sustain our activities and events.”

Scheibe also noted the collaborative and non-departmental nature of the Wasch Center, especially in contrast to the competition that can sometimes arise within departments at undergraduate universities.

“Morale within the Wasch Center has always been positive,” Scheibe said. “There’s no competitiveness, no sense of preference or striving to achieve distinction or tenure. It’s a wonderfully eclectic group of people, and there’s no departmentalism because we don’t belong to one discipline as much as we’re members of the Wasch Center.”

Beyond providing office space for retired professors, the Wasch Center is also home to programs such as a bi-weekly lecture series, an Emeritus College, non-credit classes through the Wesleyan Institute for Lifelong Learning (WILL), and receptions for newly retired faculty, among a variety of other programming.

The WILL program, directed by Professor Rick Friswell, provides opportunities for members of the wider Wesleyan community who are interested in continuing their education through non-credit courses.

“The idea was to begin an adult education program that would be staffed at least in part by retired faculty members who wanted to teach a course on this or that odd topic,” Scheibe said. “We’ve had courses on 50 or 60 different topics.”

“The Emeritus college is a way of encouraging undergraduates to think of retired faculty as an extra kind of resource,” Scheibe said. “That’s been a wonderfully rich idea and needs more development, because there are faculty members around who are just itching to teach. It’s a really fine opportunity if you find the right match.”

The Wasch Center is preparing for some administrative changes at the end of the semester. Beveridge and Dupuy will step down as co-directors this summer, to be succeeded by Professor Krishna Winston. Both Beveridge and Dupuy, along with Scheibe, said they are excited to see what Winston will accomplish in the role.

Dupuy said that he is sure he will continue to be involved with the Wasch Center even after stepping down as co-director.

“I’ve been editing the Center’s bi-annual newsletter for the past three years,” Dupuy said. “I will continue to do so when I step down as co-director at the end of June of this year, and participate in the Center’s events and activities.”

Going forward, the Wasch Center expects to continue with its programming and providing support and community for retired professors. Scheibe said he hopes that students will be encouraged to explore the opportunities for intellectual discourse that the Center presents.

“Most of our programs are well-attended,” Scheibe said. “But we can always find a seat somewhere.”