The Impossibilities of Vacating Championships: A Semi-Defense of Major League Baseball 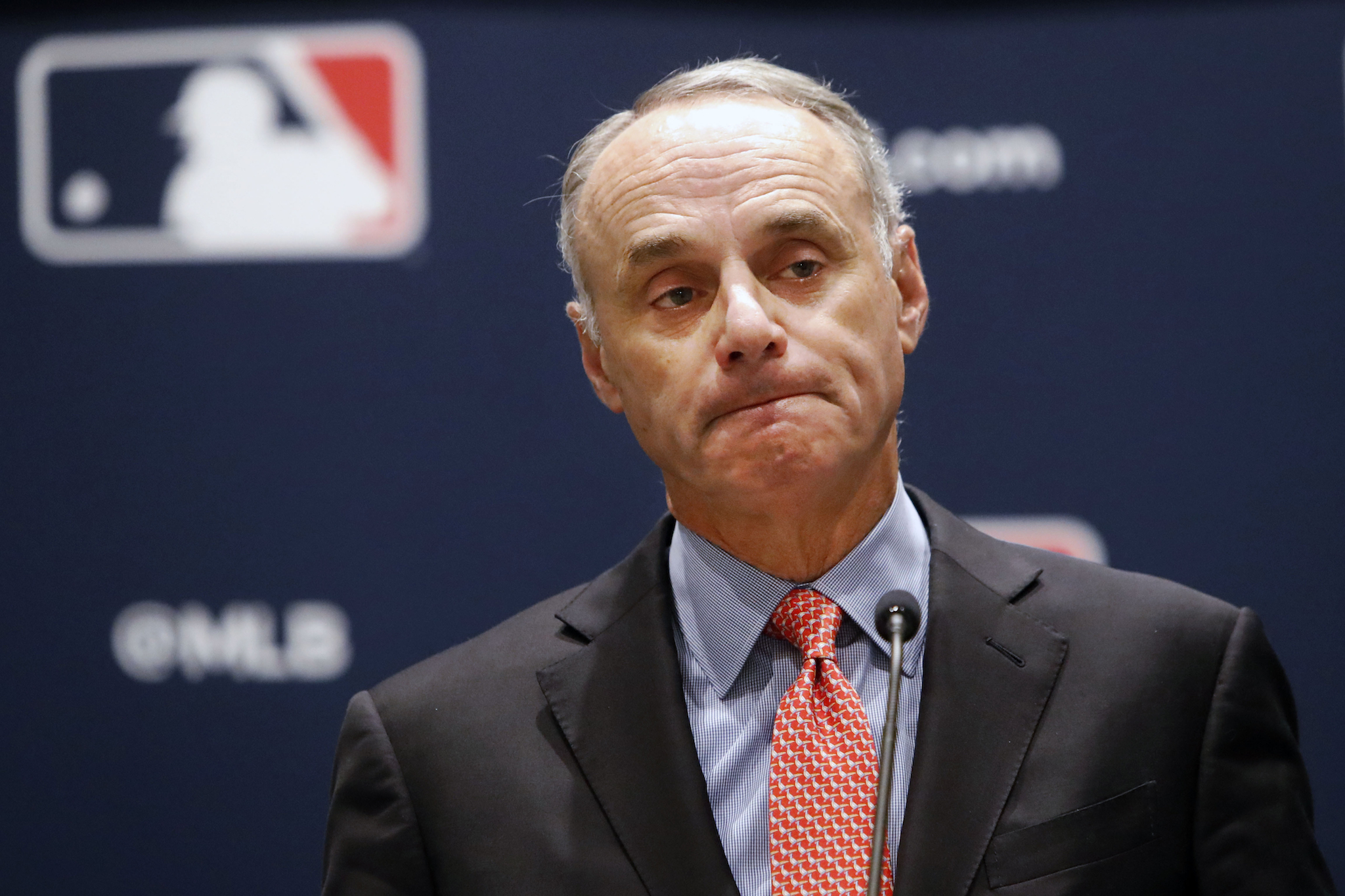 Given that my current extracurriculars begin and end with sports writing and mock trial, it makes sense that I’d finally take the opportunity to link them together. Last year, our neighbors to the west at Yale University put on a masterclass in the mock trial national championships, stringing together a compelling and entertaining performance that earned them a spot in the final round. Their success continued, and they moved onto the national championships and won. But it turned out that the team had cheated at the end of the final round, and subsequently had their national title stripped and vacated. On the website for collegiate mock trial’s governing organization, they left a simple message: “no winner declared.”

By stripping the title, the American Mock Trial Association (AMTA) took on a heavy burden. They somehow had to alter the memories of everyone watching the round who remembered Yale’s victory. Given our current failure as a civilization to acquire Men in Black-style mind wiping devices, AMTA was only left with one option: convincing the community that Yale wouldn’t have won the championship if they hadn’t cheated. This, of course, is an impossible conclusion to make.

Major League Baseball (MLB) finds itself in an oddly similar situation, as the league’s earlier efforts to contain the Houston Astros’ sign-stealing scandal has blown up in spectacular fashion. In a report released last month, MLB found that the Astros used electronic equipment to illegally record and decode the hand signals of the opposing catcher. This allowed Houston batters to anticipate pitches before they were thrown.

Although the scheme allegedly lasted over several seasons, MLB chose to specifically highlight the Astros’ wrongdoing during the 2017 regular season and playoffs, in which the Astros won the World Series over the Los Angeles Dodgers. In punishing Houston, however, commissioner Rob Manfred specifically targeted a few individuals on the coaching and roster-building side in what had been described as a “player-driven” scheme. Manager A.J. Hinch and general manager Jeff Luhnow were both given one-year suspensions, then immediately fired by team owner Jim Crane. Additionally, Houston was fined five million dollars—the franchise is valued at $1.775 billion, and Crane has a net worth of $2.5 billion—and was stripped of four draft picks.

It wasn’t until this month, however, that the scandal grew from a smoldering brush fire to an all-consuming inferno. Spring Training offered major league players their first chance to interact with the media on a large-scale basis, and they used that opportunity to blast anyone and everyone connected with the 2017 Astros. Players seem to believe that MLB’s discipline didn’t go far enough, with the prevailing sentiment being that Luhnow and Hinch were positioned as scapegoats so that the Astros organization and players could escape larger punishment.

Dodgers star Cody Bellinger, a member of the 2017 team that lost the World Series to the Astros in seven games, offered perhaps the most scathing rebuke to Manfred.

“I thought Manfred’s punishment was weak, giving them immunity…” said Bellinger. “Everyone knows they stole the ring from us.”

“I just don’t think it holds any value,” Judge said of the Astros’ 2017 title. “You didn’t earn it. That’s how I feel, it wasn’t earned. It wasn’t earned playing the game right.”

“I had a lot of respect for them, the way they played and what they did,” said Judge. “And to find out that it wasn’t earned, they cheated, that didn’t sit well with me. I just didn’t feel like the post that I did really meant the same anymore.”

An outright mutiny by star players like Judge and Bellinger is dangerous territory for MLB. Baseball has steadily lost popularity as a major American sport, sitting in third place behind football and basketball in a 2018 Gallup poll. Attendance has been declining since 2012, and the game’s stars trail in marketability behind those of the NBA or NFL. Its hold is especially precarious among young people; as of 2017, only seven percent of viewers were below the age of 18. Given this information, it’s reasonable for MLB to feel pressure to align themselves with players by giving the Astros a steeper punishment. With the league’s credibility still suffering from the long-term impacts of the steroid era, I’d imagine Manfred would consider any step that could help repair pro baseball’s image. A tumultuous showdown with players would only serve to weaken the league’s already declining popularity, leading to lower TV ratings and, most importantly to the league, lost revenue.

One of the more drastic punishments floated by the public has been to vacate or otherwise qualify the Astros’ 2017 title. A quick Google search of “vacate Astros championship” will provide a horde of opinion articles, online petitions, and even political resolutions. When asked about whether MLB should vacate the title, however, Manfred managed only to add more fuel to the fire, insulting players by suggesting that World Series titles are worth little more than a trophy.

“The idea of an asterisk or asking for a piece of metal back seems like a futile act,” said Manfred. “People will always know that something was different about the 2017 season…”

Manfred’s casual dismissal of an award many players go their entire careers without approaching certainly poisoned his message’s reception among players and fans, but the underlying logic remains sound. If the Astros’ title is stripped, it is not plausible that fans will simply forget what happened in 2017; rather, that year will always be known as the year the Astros won the World Series, but weren’t allowed to keep the trophy. The material symbols of victory–the trophy, the plaques, the historical records–can be changed, but the memory of winning a championship can not. MLB can’t stop people from remembering the Astros championship parade, or from wearing their 2017 world champion t-shirts. The league can remove the superficial rewards from winning the championship, but they can never strip the Astros of their institutional memory of ultimate success.

Moreover, it’s impossible for MLB to prove that the Astros’ cheating actually affected the outcome of games. It’s certainly likely–after all, why would the Astros have done it if it had no competitive impact–but sign-stealing could have been only one of a multitude of factors that might have made the difference between a World Series victory or defeat. The outcome of every baseball play is determined by an infinite number of variables. The difference between a home run and a foul ball could have been knowing a pitch in advance, but it could also have been a bad throw by the pitcher, or a lucky guess by the batter, or an outfielder mistiming their jump, or even a fortuitous change in wind speed. What if the Astros would have won those games without cheating? Assuming Houston doesn’t cheat this season, it still boasts a competitive roster that could have playoff success without illegal advantages. Untangling the causal web that lead the Astros to each of their 112 wins in 2017 is absurd, and any attempt to do so would only expose the league to even more controversy.

It’s hard to take the side of anyone in professional baseball in the course of this debacle. MLB has botched its investigation, the Astros’ owner and players have been utterly unrepentant, and opposing players could soon look like hypocrites if the league’s ongoing investigation uncovers any evidence of wrongdoing by other clubs. However, Manfred has absolutely made the right decision by refusing to vacate Houston’s title. The Astros undoubtedly deserve a harsher punishment and hopefully will find some way to hold players and ownership accountable to such a degree that the pain inflicted outweighs the residual glory of winning a title. Undoing championships, however, is rebutting reality; events happened, people remember them, and we need to move forward by altering the future rather than denying the past.