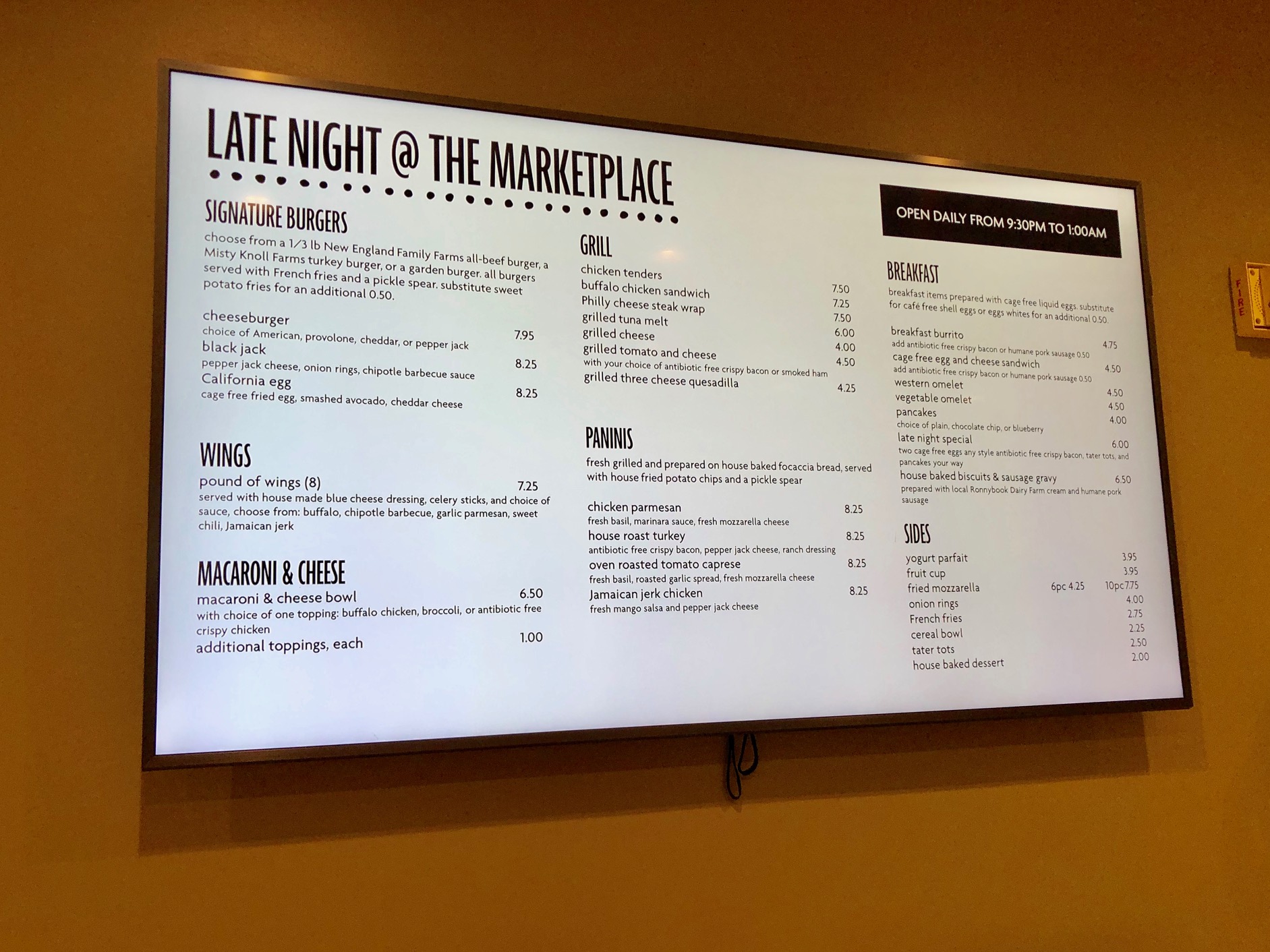 A new first-year meal plan that includes meal swipes for all meal periods, including break periods, will be introduced in Fall 2020. The new plan will be the only choice available for incoming first years. All students will also be able to use their meal swipes at Late Night in the next academic year.

“This is going to be the most valuable meal plan, I think, available across all meal choices, even including seniors,” Khan said. “It would be worth about $2400 in value, which is much higher than anything the freshmen had previously, but it’s along the lines of what seniors and juniors have available to them now.”

Khan also hopes to extend this new meal plan option to other class years without any additional charge.

“As it currently is, the plan would be available to sophomores, juniors and seniors also, but they would have to pay $300 extra, which is something that I am trying to get rid of, and the people at Bon Appétit and dining also agree that they should drop the $300 fee,” Khan said. “Especially for rising sophomores who like their meal plan and wanted to keep the high number of meal swipes, we just don’t think that it makes sense to charge them one year and make it free another the other.”

Along with the new meal plan, another major change to University dining will be the extension of Usdan’s dinner dining period to run until the end of Late Night. Currently, students must use points at Late Night, but this change would allow meal swipes to be used at Usdan from 5 p.m. to 12:45 a.m.

“We have gotten them to add a late night meal swipe option,” Khan said. “So basically what that means is…during dinner period, you can either swipe in at Usdan or Summies or wherever, or you can swipe in during late night. So we really added that option for students, especially athletes, who can’t really make dinner at Usdan or Summies but need to use that swipe somehow, so they can use it at Late Night. So basically dinner’s going to be one large meal period.”

Khan, who has been working on creating the new meal plan and keeping dining services open during break since September 2019, believes the problem of food insecurity on campus linked these two projects together.

“I know very well as a first-gen, low-income student that food security is a really big issue—not just at Wesleyan, but across college campuses,” Khan said. “So this discussion about the meal plan tied in with our demand for spring break dining, which transitioned into break dining overall because a lot of low-income students can’t really always afford to go home for breaks.”

Khan was driven to develop this new plan because of his concern about the number of students who run out of meals.

“Looking at the amount of people on the emergency meal program, emergency points program, too, it’s just really concerning that at a billion dollar institution…we can have students who are skipping meals, rationing meals, having to be depending on donation meals,” Khan said. “It just doesn’t make sense to me that this wasn’t a priority already.”

Details for both the new first-year meal plan and changes to Late Night are still being worked out by Bon Appétit.

“The Freshman meal plan (yet to be named) and the ability to swipe at late night will definitely happen, but beyond that I have no information to release at this time,” Director of Usdan University Center Michelle Myers-Brown wrote in an email to The Argus.

While Khan is currently trying to work with the University to make the meal plan available beyond just the first-year class, he does not believe significant changes will be made to the proposed plan.

“Obviously Bon Appétit might do some final configurations, but I don’t think it’s going to change beyond this,” Khan said.

Khan credits the University for listening to student voices on food insecurity and wants to reassure the student body that the WSA and other student groups were heavily involved in bringing about these changes.

“We really are everywhere as the WSA, and a lot of times…we might not get credited with a lot of the stuff, but I think students should rest assured that these changes are being made with not only feedback from students, but often decisions made by students,” Khan said. “Not just on the WSA, but various committees across the school. So it might seem like the administration decides to change its mind randomly one day and have a completely new meal plan for freshmen, but I think the administration is really considerate in how it approaches things like this, by factoring in student voices.”

Jiyu Shin can be reached at jshin01@wesleyan.edu and on Twitter @jiyu_shin.

Andrew Lu can be reached at ajlu@wesleyan.edu.