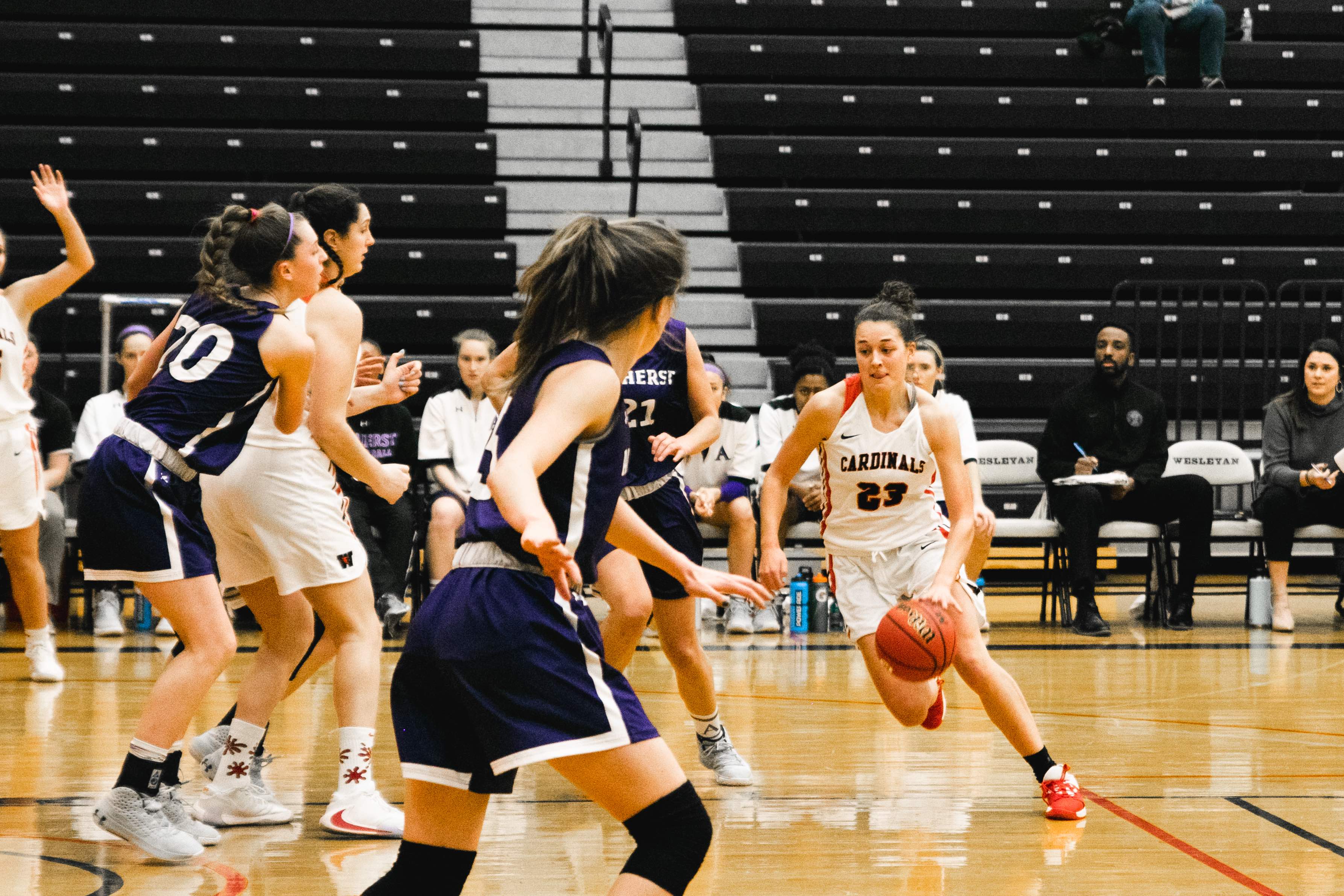 Sitting at a middling 11–9, the women’s basketball team needed to finish the season on a high note. The team found their strong stretch in the form of two decisive road wins.

Over the weekend, the Cardinals took on NESCAC rivals Williams and Middlebury, improving their conference record to 3–5 and 13–9 overall. The wins pushed the Cards into sixth place in conference standings—just one game below Hamilton and one game above Bates College. With both of these victories coming away from Silloway Gymnasium, the teams road record is now 7–3, good for fifth in the conference.

The first game took the Red and Black up to Massachusetts to face Little Three rival, Williams. The Cards were looking to avenge a 19-point home loss to the Ephs suffered earlier this year. After a Williams’ three-pointer to open the game, the Red Birds went on a 10–0 run and never gave up the lead. At the end of the first quarter, the score was 17–10 in favor of the road team, and the Cards only increased that lead en route to a 61–52 victory.

While it was a slower paced game—neither team had any fast break points the entire game—the Cardinals controlled the ball with limited mistakes. The Cards earned a 53–50 rebounding advantage and only committed nine turnovers all game, well below their average of 15 per game. The sophomore tandem of Marina Petruzzi ’22 and Caleigh Ryan ’22 combined for over half of the Red Birds’ points with 18 and 13 respectively. But the real key player against Williams was junior forward Katy O’Connor. To go along with 12 points, she finished with 21 rebounds, over double her season average of just over nine boards per game. O’Connor’s 21 rebounds were a new career high.

O’Connor has seen an expanded role this season. After averaging just under 10 minutes per game over her first two seasons, she’s now averaging eight points and nine rebounds per game in just under 25 minutes of action.

Playmaking duties were passed off to Ava Tompkins ’20 who filled up the stat sheet with seven points, eight rebounds, four assists, three steals and one block.

The deciding factor in this victory was not just the exceptional playmaking and scoring of the Cardinals starting lineup: it was their ability to get to the free throw line. The Red Birds went to the charity stripe 29 times against Williams, and knocked down 21 of them. In fact, in the seven games where the team had 20 or more free throw attempts, they won six times. The only mark in the loss column coming in was a two-point overtime loss against NYU all the way back in December.

After the win at Williams, the high watermark for the free throw attempts came in the Cardinals next game, a win at Middlebury. The Cards had 35 free throw attempts and dominated the Panthers in an offensive showcase, winning 84–70. In familiar fashion, the Red and Black jumped out to a 10–0 lead, and by the time the half was over they were up 41–36.

This time, guard Maggie Clark ’22 led the team in scoring with 22 points, going 4-8 from deep. She was also a perfect three for three from behind the arc in the third quarter. Petruzzi also had a stellar game, finishing with a final stat line of 20-8-3. While Ryan—the team’s leading scorer—struggled from the field, she was able to get to the line 14 times and ultimately finished with 14 points. The game against Middlebury showed the Cardinals at their best. Four out of the five starters finished with double figures. They shot over 40 percent from the three and were able to force Middlebury into committing 20 turnovers. Looks like the Cardinals are hitting their stride as they finish the season with two home games this weekend.