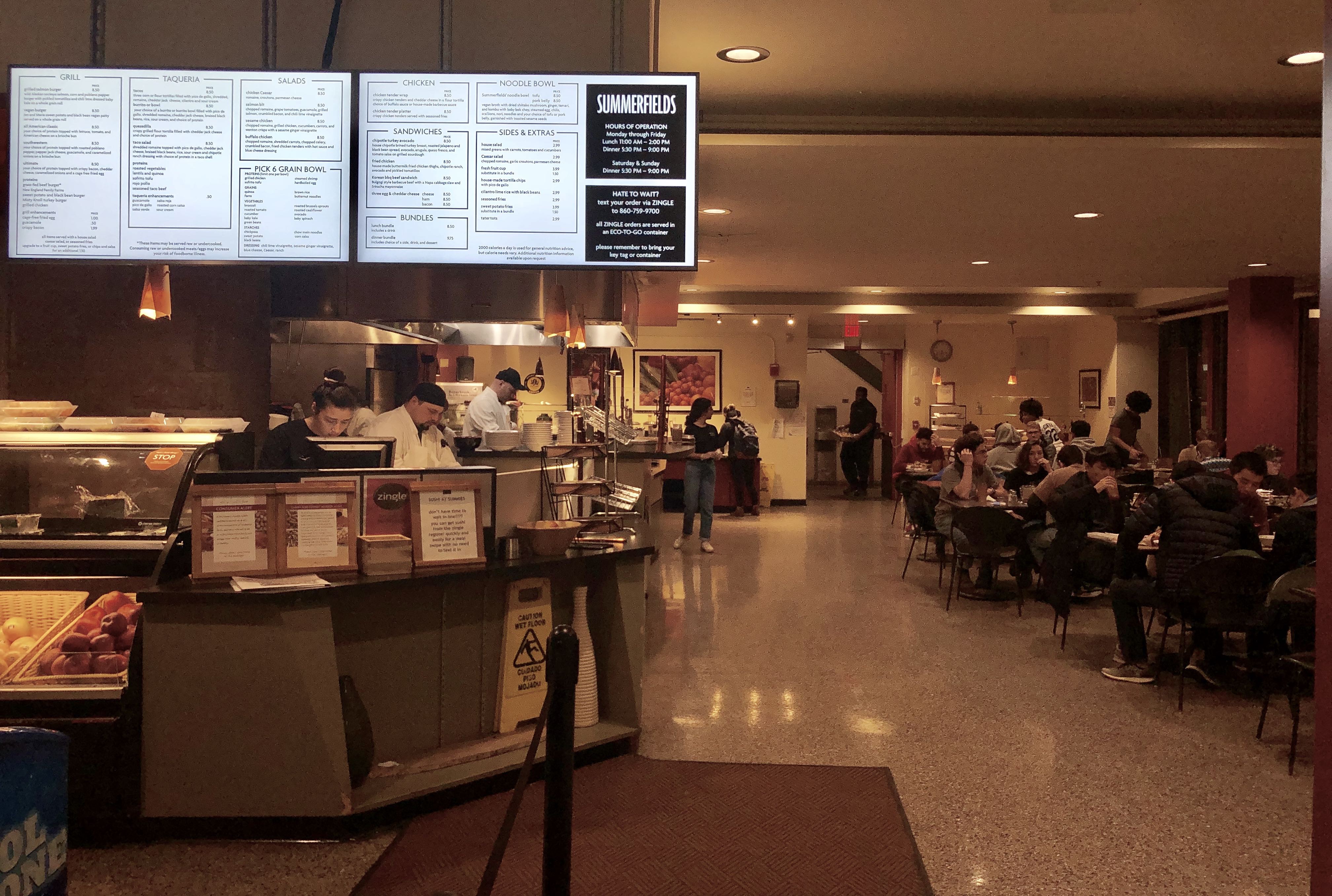 Summerfields will remain open over spring break this semester as part of a pilot program to provide meals over break periods. Though no other campus dining locations will be open, Summerfields will serve meals daily from Saturday, March 7 through Sunday, March 22 for brunch (11am–1pm) and dinner (5–6:30pm).

The University will cover the dining costs for financial aid-eligible students, and other students will be able to use their meals and points from their current spring semester plan over the break. Director of Usdan University Center Michelle Myers-Brown explained in an email sent to the student body on Feb. 12 that all students need to sign up through a form to participate in break dining, and students who believe they are eligible for financial aid for the program should indicate this on the form.

Vice President for Student Affairs Michael Whaley cautioned that students may run out of meals or points because spring break dining was not factored into current spring semester meal plans.

Whether the University will continue to make dining available during future break periods depends on the results of the program this spring.

“As this is a pilot program, future years will depend on the success of this year,” Myers-Brown wrote in an email to The Argus. “However we are hopeful that it will indeed be a success and we can continue.”

Whaley said break dining could also see expansions in the future, depending on how many students take advantage of the program this spring break.

“I think it just depends on what the demand looks like,” Whaley said. “We’re picking Summerfields, really, because the costs of the program, running that program, are less than opening up all of Usdan for the break period. But if it turns out that there are large numbers of students who are here and are going to be using the program beyond what Summerfields could handle, then we’ll have to look at Usdan.”

According to Whaley, the pilot program was developed after two years of discussions on support structures for students over break periods. The Break Services Committee, composed of Whaley and a group of staff members from the Division of Student Affairs, realized some students who remained on campus faced food insecurity.

“We really looked kind of holistically at the campus…and one of the pieces that emerged, not surprisingly to anyone, is the food insecurity that can crop up for students when we are not in session,” Whaley said. “And so we immediately started thinking about how could we resolve that.”

Whaley said the committee, which researched some of the University’s peer institutions that have meal plans run continuously through the whole academic year, saw that the University’s dining periods created problems for some students who remain on campus over breaks.

“Food insecurity, especially for students on financial aid and high-need students is kind of an ongoing issue,” Whaley said. “Some part of the way that Wesleyan does business is predicated on a model of we’re in session, then we’re not, and everybody goes home… and that does not work. That paradigm does not work for an increasing number of students…. So instead what we were trying to do with our committee starting two years ago was to say, ‘How do we design a Wesleyan experience that works for everyone?’”

Whaley believes this pilot program, in combination with the new meal plans that are scheduled to be introduced at the start of the next academic year, demonstrates how the University is taking significant steps to reduce food insecurity on campus.

“There are many students for whom this is really critical, and so I’m really pleased with all the students who have helped us think through these issues,” Whaley said. “And again, really, really happy that President Roth and the finance team have been supportive of spending this money to resolve some of these food insecurity issues that we’ve been talking about.”