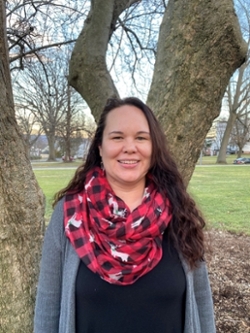 Angie Makomenaw was hired as the new Mental Health Education & Prevention Coordinator for the University’s Counseling and Psychological Services (CAPS) in January 2020.

“This position is a new one created out of an understanding of the importance of prevention in mental health,” Makomenaw wrote in an email to The Argus. “I am accountable for providing initiatives to the Wes Community in the areas of resilience building, holistic wellness, and suicide prevention.”

CAPS Director Dr. Jennifer D’Andrea hopes that the creation of the Mental Health Education & Prevention Coordinator position will allow the University to invest more time and resources in educating members of the Wesleyan community about mental health.

“Traditionally, the CAPS psychotherapists have taken on both clinical and educational roles within the University community, but given the student demand for therapy we have not been able to carve out the space that education and prevention truly deserve,” D’Andrea wrote in an email to The Argus. “Ms. Makomenaw’s position is entirely dedicated to this area, so we anticipate this aspect of our services will grow significantly from this moment forward.”

Makomenaw has now been working at the University for five weeks. So far, she has hosted two training sessions for Office of Residential Life staff and another for the University’s athletic coaches on “Question. Persuade. Refer.” (QPR) Suicide Prevention.

She has several priorities that she hopes to address in her new role, including the creation and development of a suicide prevention program at the University. She also hopes to gain a stronger understanding of the University’s mental health needs in order to improve the services offered at the University.

“Another critical priority is to connect and talk with members of the university community—students, staff, administrators, faculty—and learn about what the community needs are and make those the top priorities,” Makomenaw wrote. “It is important to understand and identify the barriers that impede underserved student communities from accessing mental health services.”

Makomenaw received her Bachelor of Arts in sociology with a minor in ethnic minorities studies and her master’s degree in criminal justice from the University of Colorado.

“My background is unique considering that I have a Master’s in Criminal Justice and have spent the last 19 years in various victim advocacy roles,” Makomenaw wrote.

After graduation, Makomenaw worked as a Victim and Witness Assistant for the District Attorney’s Office in Centennial, Ohio, and then as a Domestic Violence Coordinator for the Saginaw Chippewa Tribe of Michigan. In this role, she founded the Nami Migizi Nangwiihgan program on her reservation, which provides services for victims of domestic violence, sexual assault, and stalking.

“Even though I did not grow up on my reservation, it was engrained into me to contribute to my community,” she wrote. “I identify as Saginaw Chippewa from the Black River and Swan Creek bands of Ojibway and Mescalero Apache…. Even though I grew up in southern Oregon and was born in Samoa, I consider the Isabella Reservation as my home. It was the first place that I have ever lived that I did not have to explain my heritage or ethnicity. ”

Makomenaw remains involved in supporting indigenous communities through her work as a peer grant reviewer for the Violence Against Women Act and the Victim of Crimes program as well as a Resident Fellow at Yale University, where she is working to create a Women’s Support Group at Yale’s Native American Cultural Center.

“The skills I have learned through victim advocacy are critical thinking, problem solving, creativity, and individual centered education,” Makomenaw wrote. “My focus at [Wesleyan] has simply shifted from advocating on gender violence to mental health.”

D’Andrea told The Argus that, in addition to hiring Makomenaw, the University has other plans to expand CAPS’ staff.

“We are currently considering the addition of a case manager position,” D’Andrea wrote. “This position, if added, would assist students with identifying community therapists as well as streamline the communication between CAPS and community providers such as Middlesex Hospital, private therapists, and Intensive Outpatient Programs.”

The University is also assessing whether there is a demand for more CAPS clinicians.

According to Vice President for Student Affairs Mike Whaley, depending on the impact of Makomenaw’s work, the University will decide how to allocate future resources to CAPS.

“Fortunately, an incredibly generous alum is funding this pilot program,” Whaley wrote in an email to The Argus. “We look forward to measuring impact and then can decide how best to deploy additional resources in CAPS.”