In “The Voice in the Headphones,” David Grubbs Listens to the Musician and Audience 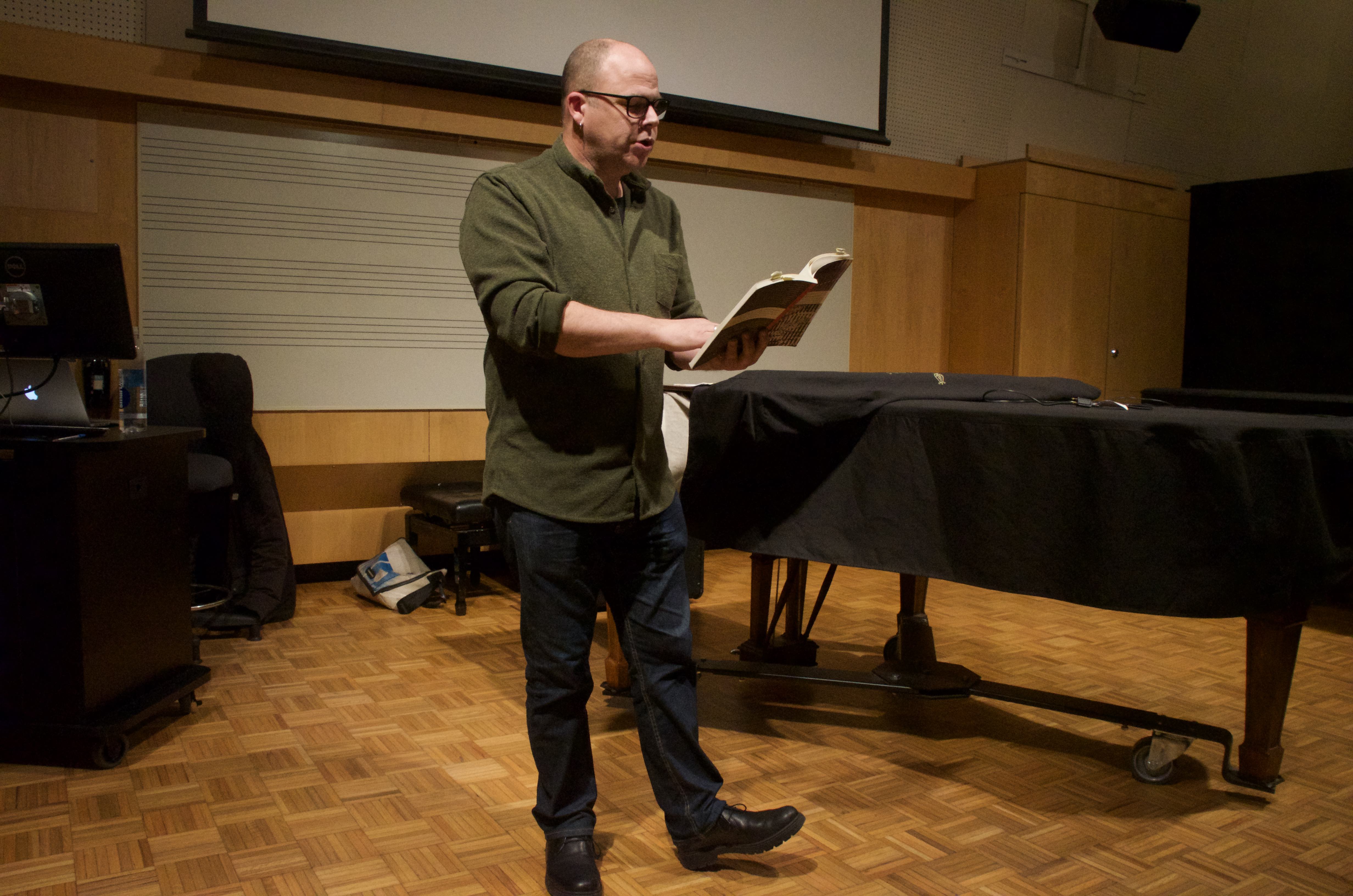 David Grubbs, Professor of Music at Brooklyn College and The Graduate Center, CUNY, conducted a reading from his upcoming book “The Voice in the Headphones” and his previous book “Now that the audience is assembled” on Tuesday, Feb. 11. Grubbs also discussed his other work, his writing process, and his upcoming projects.

“The Voice in the Headphones” is his second publication in music writing, and it reads as a book-length poem. An accomplished musician, Grubbs also holds a Ph.D. in English.

A discussion of breath weaves the different dialogues in “Now that the audience is assembled”  together. For example, Grubbs depicts the relationship of a musician to her instrument through breath. He describes her inhales and exhales prior to a performance, and parallels them with the anticipatory breaths of the audience. A triangular relationship is thus created between audience, musician, and instrument.

The intensity of this relationship erases the concept of repetition. The promontory routine of the musician preparing for her performance is so imprinted in her brain that it ceases to feel repetitive. Feedback is redefined as attention rather than the recurrence of sound waves.

“Feedback is the consequence of the listener’s intensity of focus,” Grubbs read.

Grubbs’ reading style mimicked the sounds of his content: he paused when the musician in his writing paused, and read faster when she fumbled nervously through the necessary preparations.

In his discussion, Grubbs mentioned that he only began to engage with musical writing extensively within the last few years. His previous publication “Records Ruin the Landscape: John Cage, the Sixties, and Sound Recording” is a comparative study of the different listening cultures of experimental music. Grubbs seemed deeply wary of writing yet another book about the notorious cult figure John Cage, but he also felt that his work best captured how and why experimental music was not conducive to, and evaded, recording culture. 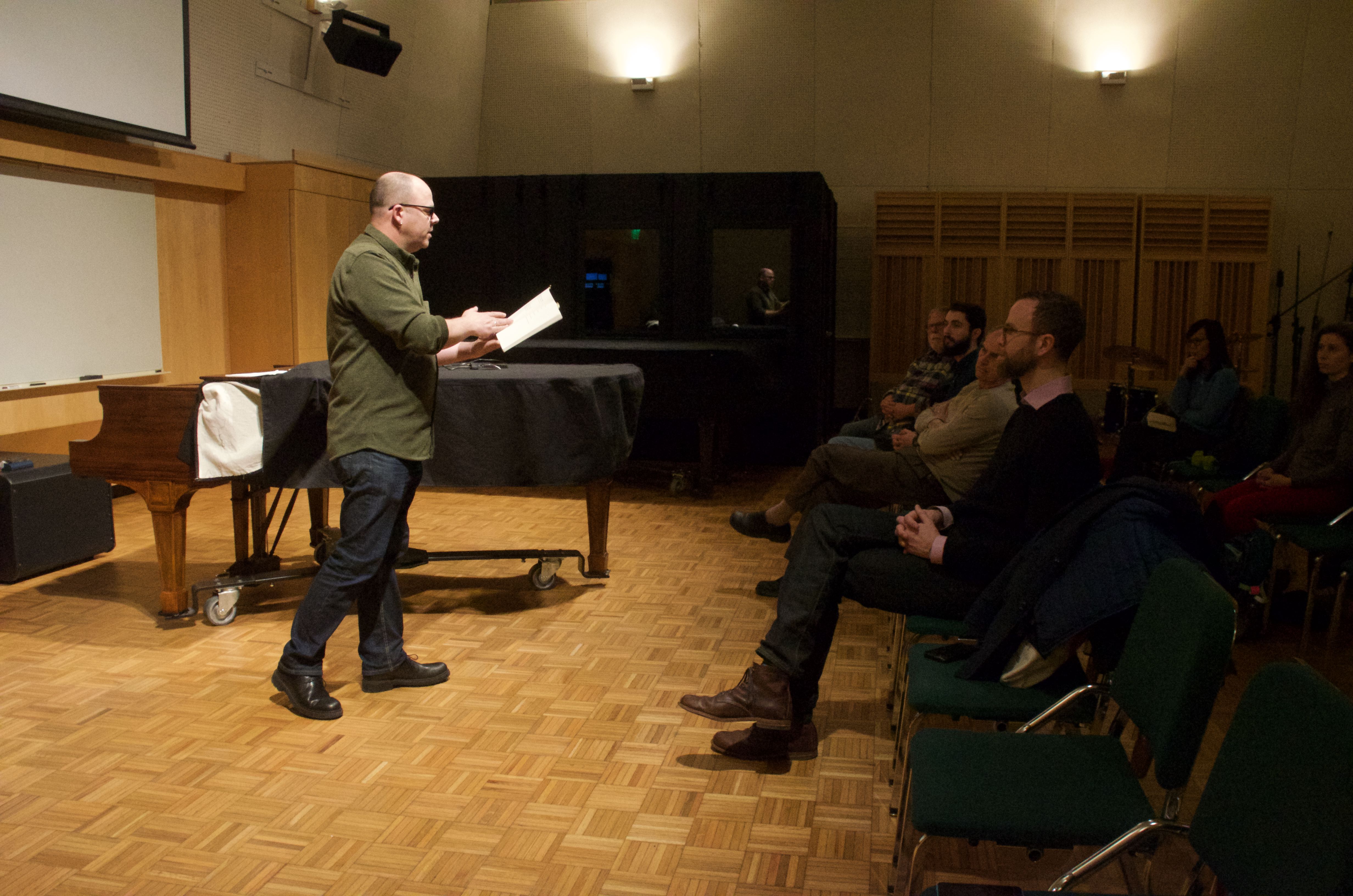 “I was interested in the subject matter, and to this day, I love Cage’s writing,” Grubbs said.

This academic form of engaging with music propelled him into his next project. Grubbs wanted to engage with another form of literary expression, particularly the one that he studied in college: poetry.

“I was ready to write about live performance,” Grubbs said. “I wanted to write about conversation, instrument building, to write with a sense of time and a feel of duration.”

Grubbs’ introduction to poet Susan Howe in 2004 sparked the beginning of a sixteen-year artistic partnership and further inspired his delve back into poetry.

“Working with Susan really reinvigorated my interest in poetry and really had an impact on my way of writing about music,” he said.

Grubbs discussed their collaborative process. It goes something like this: Howe sends a written piece to Grubbs. Grubbs familiarizes himself with the piece in great detail, then records Howe reading the piece. Based on his new understanding of the work post-reading, Grubbs inserts sound and audio, edits, and splices the recorded sound.

“I try to add as little as possible,” Grubbs said.

Grubbs played a sample of a collaborative piece entitled “Frolic Architecture,” which affirmed his intended minimalism. A mixture of ambient tones, gasps, and fragmented lyrics, the piece was meditative and patient. Words and music spread apart evenly, stretching out time.

Grubbs concluded his talk by reading from his recent work: a book about the headspace of working in the recording studio and the dialogue that happens there. However, nature and the external also filter into the text, constructing a psychological environment in lieu of a physical one. This new work could be seen as a continued dialogue between musician, instrument, and audience, now that they have assembled.