A Wesleyan Rom-Com: My Parents and their Love Story 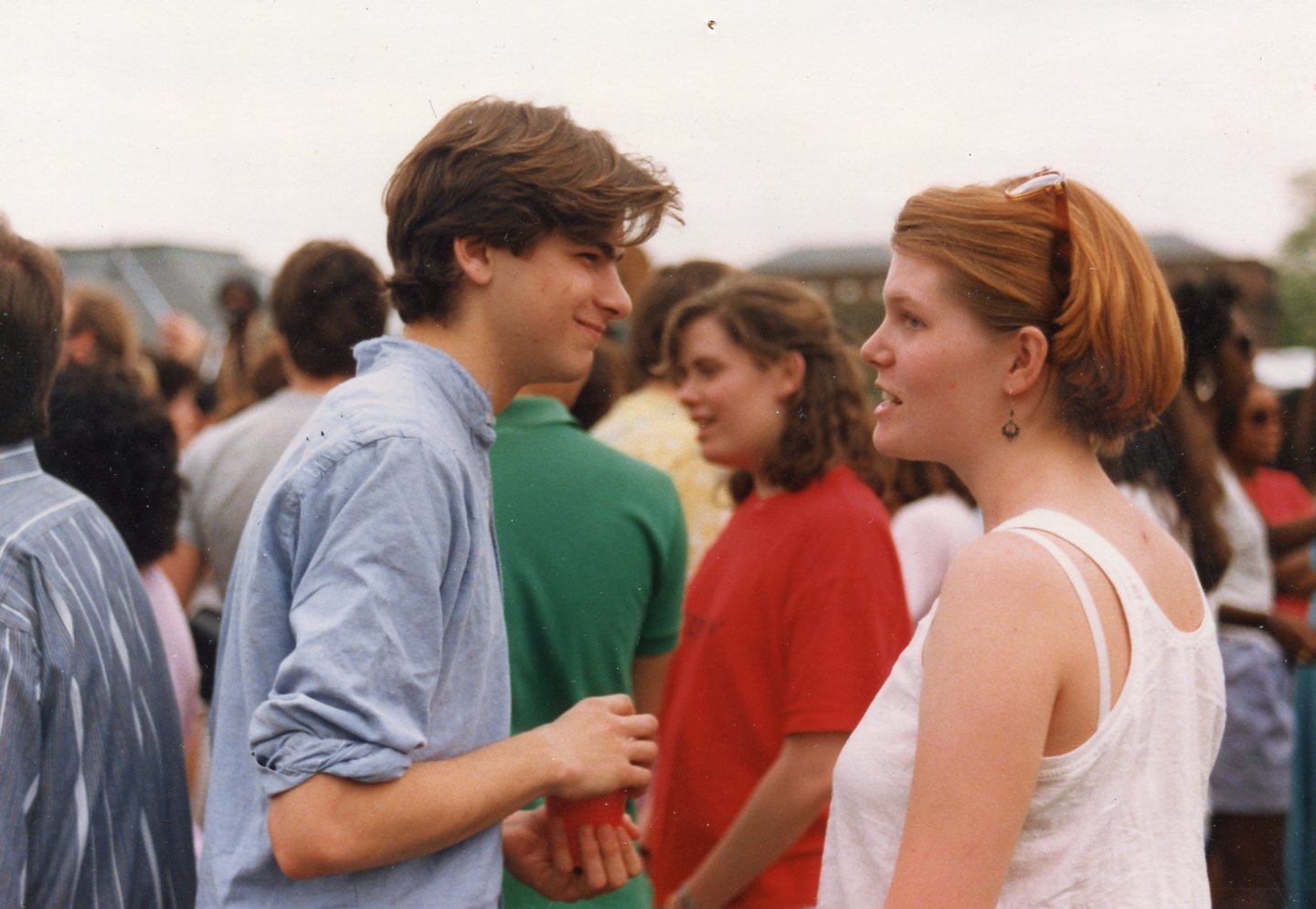 My parents’ love story is in some ways straight out of a rom-com. From my cursory knowledge of their early relationship, they met when my dad, James Shiffer ’89, was a sophomore and my mom, Kirsten Delegard ’90, was a freshman. My mom asked my dad out, and the rest was history. 32 years later, I stepped foot on campus as a member of the Class of 2023. Not only am I a student at the same institution that they attended, but now I’m also an Assistant Features Editor for The Argus, where both of them met for the first time—and also eventually both became Editors-in-Chief.

My introduction to Wesleyan began at an early age. My first cat, an orange tabby with a sassy personality, was named Argus, although that reference went over my head at the time. During the college application process, I was constantly bombarded by random facts about Wesleyan, and how other universities measured up to its standard. Looking back it makes sense, because as a literal product of Wesleyan, I should expect no less from my parents, who have the institution to thank for love.

For this Valentine’s Day, I decided to interview my parents about how they met. And, let me tell you, it’s a very Wesleyan love story.

For my mom, the story began at The Argus.

“I remember walking, I was in The Argus when it was back in the old building, not where it is now,” she explained.  “It was this kind of, I wouldn’t say ramshackle, but yeah, this house that had been heavily used, let’s put it that way. And I remember [James Shiffer, my dad] walking in the front door of The Argus, and I was like, ‘Ooh! Who is that cute boy?’ and then he was like ‘I’m the Arts Editor’ and I was like ‘Oh, be still my heart!’ [laughs], so, because he likes arts and he’s cute… He had nice fluffy brown hair and beautiful blue eyes. And this is the best part, because he was like ‘Where are you from?’ and I said ‘Minneapolis.’ And by this time, I was used to being like…‘Oh, is that in Ohio? Is that in Iowa? Do you do Cow Tipping there? Did you grow up on a farm?’ But your dad said, ‘Minneapolis?! I’ve heard that’s one of the nicest cities in the country. My mother goes there all the time and she loves it. She says it’s beautiful and it’s her favorite place.’ Then that was it. I was smitten.”

A couple of weeks later, she finally mustered up the nerve to ask him out on a date.

“I did my best to encourage him to ask me out, other things—he was completely oblivious,” my mom said. “Maybe he wasn’t oblivious—he was uninterested, did not respond. And then, he was like ‘yeah, I’m going abroad next semester!’ and I was like, ‘Oh, okay. So when we leave for the semester, like that’s it, I’m never going to see him again. He’s gonna leave, it’s gonna be like 9 months, that’s it.’ And so I was like, ‘Okay, fuck it. I’m just gonna ask him out.’”

She asked him to a showing of the play “The Elephant Man.” Apparently, a bunch of her hallmates wanted to go to the play too, but she didn’t want them to spoil her date, so she told them to hide in the back and pretend that they didn’t know her. The date went well, for the most part. But after the date, disaster struck.

“[After the date] he clapped me on the back and he was like ‘Well, I’m off to band practice!’ and I was like ‘Band Practice? You’re not in a band,” she said with a laugh. “In all these months I’ve been kind of stalking you, and I would know if you were in a band, and you’re not in a band.’ And I was like, ‘wow, he just lied to me, he was so eager to end this date so that he was like ‘I’m gonna make up a big fat lie about this band that I’m not even in.’ So I was like ‘Okay’, and I went back to my dorm room in tears.”

Thankfully, however, it was not a lie. A couple of days later, my dad asked my mom to come hear his band play at the Austro-Hungarian ball. According to my mom, she had some initial hesitation about the proposition.

“I was like ‘I’m not going to do that, that’s ridiculous,” she said. “‘I’ve already asked him out, I’ve been trying to get him to ask me out all semester, he blew me off for this fucking band practice, this is not even real, I’m not going to hear him play tomorrow night.’ And then my friends were like ‘Why not?’ And I’m like, ‘Okay, you have a point!’”

The night ended in success for my mom.

My dad had a bit of a different take on the whole sequence of events.

“Well, I think you’ve heard that she employed deception, surveillance, and she was stalking me,” my dad said smugly. “And so I mean, it’s really pretty amazing that then she accuses me of ignoring her.”

Apparently, he does remember that he had told my mom that he had band practice beforehand.

“And it was critically important that I go to band practice, because we had never practiced before, we were playing in front of a lot of people…” my dad said. “The only reason we had gotten that gig is because someone else had cancelled, and we desperately needed to practice.”

But—despite the various misunderstandings—the results were the same in the end. After my mom showed up to the performance, the night was cemented in the history of my parents’ relationship until the rest of time.

“I was very happy when the band performed, that she came, and I saw her dancing, and then, yeah, kind of the rest is history,” my dad explained.

There you have it folks. The beginning of my parents’ relationship condensed into one interview. And thankfully, for the sake of the story, they are still together today, after nearly 26 years of marriage, two children, and several cats. Here’s to love!