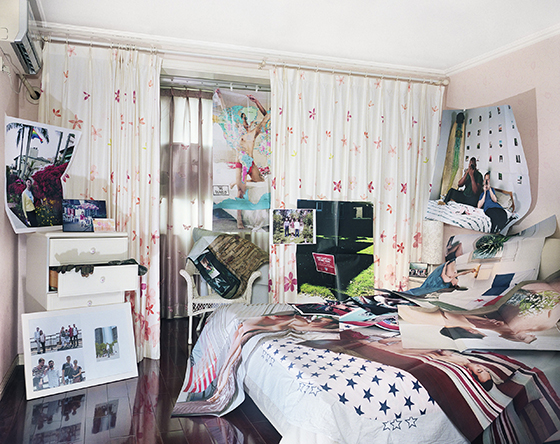 The five photographs that hang on the white walls of the College of East Asian Studies (CEAS) gallery are visually overwhelming. Colors radiate from all directions. I am standing in the center, and to my right and left are giant archival pigment prints. In front of me, the wall is awash with what seems to be a collage of magazines, galaxy-like images, and pixelated patterns, layered one on top of another. I stare at the collage for several moments but soon realize that I am not looking at a collage at all, but rather at a single photograph of a bedroom.

I can tell because I have located the floor, and I am feeling slightly confused.

In his talk at the exhibit opening for his show, “Temporarily Censored Home,” Xu discussed the motivation for his work and revealed that my confusion was his largely his intent. Influenced by Wolfgang Tillmans, Xu’s photographs reckon with queer identity, family, and ideology. Born in Beijing, China, Xu moved to the United States in 2014 to attend the School of the Art Institute of Chicago. While visiting his parents in China, Xu created the pieces in “Temporarily Censored Home” in the empty rooms of his parents’ home, surreptitiously assembling and disassembling the installations while his parents were away at work.

“These are my own interactions with space, and my own history, to give me my own space and ability towards liberation and a sense of freedom,” Xu said.

Plastering the kitchen, bedrooms, and common spaces with photographs of naked male bodies in showers and newspaper clippings of masculine characters in both American and Chinese media, Xu constructed spaces of reflection on his queer identity and how it fits within the confines of the domestic sphere as well as the expectations of masculinity across cultures. The discord of the photographs in the frame echoes the discord between expectations of masculinity by his family, his country, and his own reality.

Xu also reckons with his relationship with his family in addition to the cultural ideologies in the two countries that he considers home.

“I always want to disorient the viewer in the way that I assimilate what I feel about the U.S. and China and my family relations,” Xu said.

The spaces in the photographs are certainly disorienting. The rooms appear both flattened and elongated, depending on where photographs are situated within them. Some are spread across the bed and pour onto the floor of the room, while others are hung neatly on door frames and walls at varying distances. The polished floors themselves amplify the size of the crowded bedrooms. In this, Xu’s work is disorienting and manipulates viewers.

“Once an image becomes multilateral, it can have this power of manipulation,” Xu said.

Notions of comfort seem to be created and then disrupted. Flower patterns and butterfly pillows are reminders of home. Plants and Christmas trees are reassuring stabilizers in a room crowded with color. Xu’s physicality disrupts this comfort. He inserts himself in one photograph, dripping out of and grasping onto a door frame, looking confined and hopeless.

Xu’s references to duality and to identity in two places also throw off the viewer. A reappearing statue of Mao Zedong, facing away from the camera, is inserted into the same frame as photographs of the American flag. The Statue of Liberty is clouded in steam in an image positioned next to pieces of an old communist uniform. Here, Xu is reckoning with the cultural ideologies of both China and America and how these ideologies exist together in his own domestic space. His mother’s photographs juxtaposed with his own reflect their differing visions.

“In the photographs with my mother, I am thinking about my mom’s position as a civil servant and her desire to capture her belief in photography,” Xu said. “You see the juxtaposition between her work and my work in photography.”

The exhibit also features a video installation of Xu’s conversations with his mother, entitled “Complex Formation.” In the video he interviews her, asking questions about her political leanings. Maybe this is an attempt to embellish the photographs, to add to the conversation. But I looked at his photographs for an hour, yet only watched the video for a few minutes. The photographs speak for themselves.