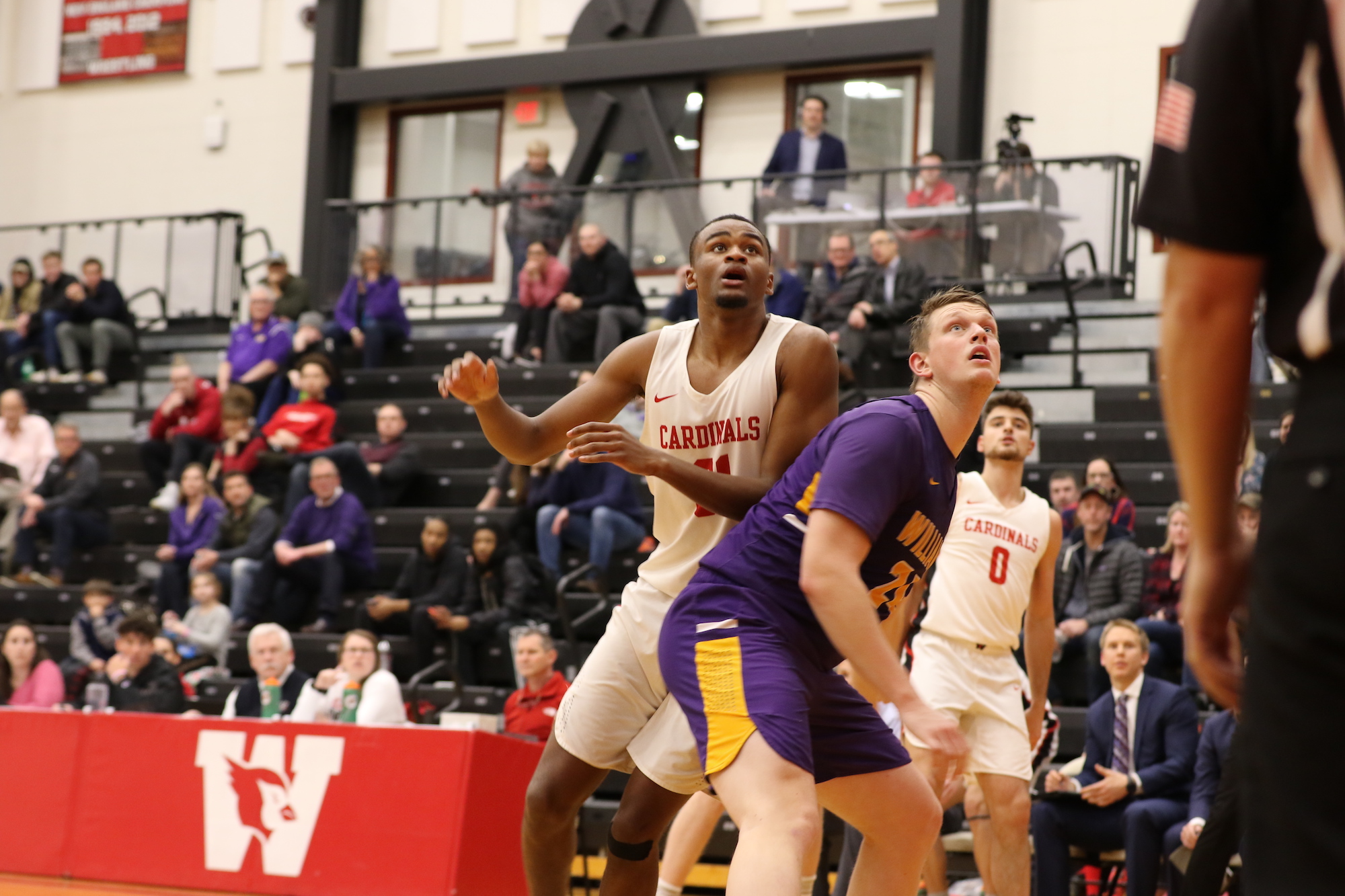 Men’s basketball has hit a rough stretch in their season, but as NESCAC play wraps up, the team has remained competitive against some of the top DIII teams in the country. After a tough road trip up to Amherst and Hamilton last weekend, the Cardinals hosted Williams for senior night on Friday, Feb. 7 and then battled No. 13-ranked Middlebury on Sunday. Although the games ended in losses for the Cardinals, both were competitive.

On senior night, Captain Jack Alberding ’20, Captain Kevin McDonald ’20, and David Dixon ’20 were honored before the game and played in the starting line-up. Williams went up 42–20 on the Cardinals in the first half behind some strong offensive production that Wesleyan could not match. Alberding started the game hot, making two threes in the first half. Trailing by more than 20 going into the break, the Cardinals faced a steep uphill battle. However, the team embraced the challenge, and outscored the Ephs 34–31 in the second half. Gabe Ravetz ’22 came out on fire in the second half and had a team-high 15 points. The Cardinals continued to push throughout the half, and capped a 33–15 run with two threes by Antone Walker ’21, cutting down a 22-point deficit to only four. Wesleyan’s comeback stopped there however, as they only scored one more point, while the Ephs were able to extend their lead again.

While the game did not go as they would have wanted, the seniors were happy to share the moment together.

“Dave, Jack, and myself all enjoyed playing together on senior night and sharing that special moment,” McDonald said.

He reflected further on his experience as a student-athlete on the basketball team.

“Being a part of the program these past four years has been an invaluable experience when taking into account everything I’ve learned from Coach Reilly, Coach Gaffaney, and former Coach Battaglia,” McDonald said. “All of the hard practices and workouts have been worth it after all of the successes shared in reaching the NCAA tournament twice and being an elite program. My current teammates and former teammates will be my close friends for the years to come. There aren’t enough good things to say about it.”

The team didn’t dwell on the loss for too long, because they immediately got back on the court on Sunday against Middlebury. A fast offensive and back and forth game in the first half put the Panthers ahead of the Cardinals 48–37. The first half had several runs, but any attempt by Wesleyan to cut into Middlebury’s lead was shot down. Ravetz continued his hot weekend, scoring 18 points and nabbing six rebounds coming off the bench. It was not enough, however, as Middlebury’s offense was nearly impossible to stop. The Panthers had five players in double-figures as they shot 60% (39–65) from the floor and 51.9% (14–27) from three-point range.

McDonald had some other thoughts on the weekend competition.

“Both games were super intense and fun to be a part of,” McDonald said. “Although we didn’t come away with the victories, we remained positive and confident as a group which is going to help us this coming weekend in Maine.”

The Cardinals have two games remaining in the regular season, and need to secure victories if they want to qualify for the NESCAC Championship Tournament. On Friday, they play no. 9 Colby, the second-ranked team in the NESCAC. Then, on Sunday, they wrap up the season in an away game against Bowdoin. Currently the Cardinals are second to last in the conference with a 2–6 record, though the team is 14–8 overall.

McDonald is looking forward to the last weekend of the regular season, and is pushing his team to remain focused—and optimistic.

“Continuing to enjoy the game of basketball and keep things in perspective is an emphasis for sure,” McDonald said. “We’ve been right there in each game we’ve lost—it’s just a few plays here and there that we need to make. Staying positive and cohesive as a unit through adversity is something we’ve been great at, so stressing that, this next weekend is important.”