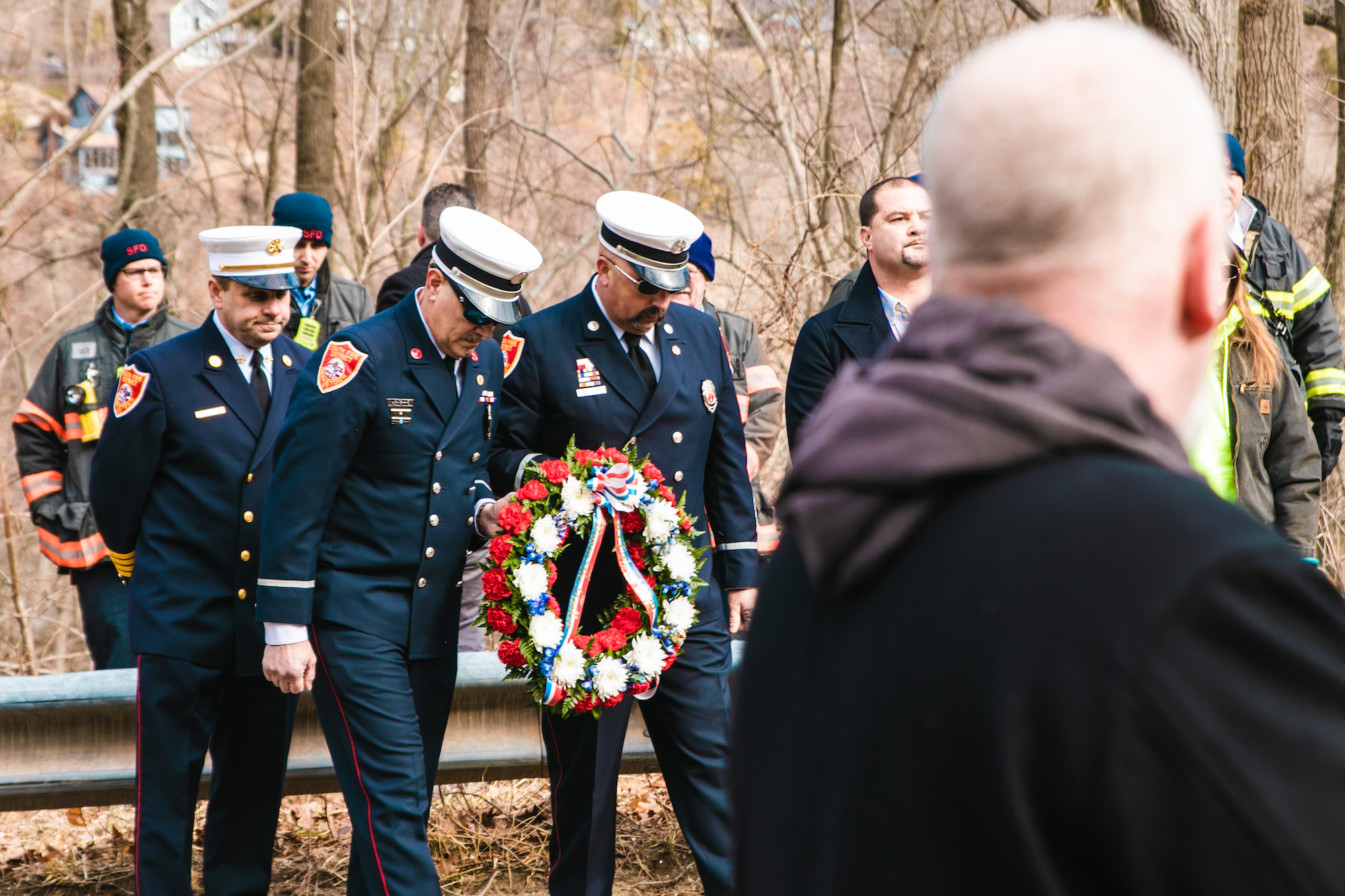 A memorial service to commemorate the six men who lost their lives in an explosion at the Kleen Energy Systems plant in Middletown was held on Sunday, Feb. 9. The memorial service, held just outside the plant at 1349 River Rd., marks 10 years since the power plant exploded on Feb. 7, 2010. It was attended by friends and family of those who died in the explosion, elected officials from across Connecticut, and local first responders.

The service honored Peter Chepulis, Ronald Crabb, Raymond Dobratz, Kenneth Haskell, Roy Rushton, and Vance Walters, all of whom were Kleen Energy Systems employees working at the time of the explosion. In addition to these 6 deaths, 50 others were injured as a result of the explosion.

The U.S. Department of Labor’s Occupational Safety and Health Administration (OSHA) later determined that three construction companies and 14 site contractors were responsible for 370 workplace safety violations which caused the blast.

“On Feb. 7, a gas blow operation was being performed in which flammable natural gas was pumped under high pressure through new fuel gas lines to remove debris,” an OSHA press release reads. “During this operation, an extremely large amount of natural gas was vented into areas where it could not easily disperse. Welding and other work was being performed nearby, creating an extremely dangerous situation. The explosion occurred when the gas contacted an ignition source.”

The power plant re-opened 17 months after the explosion and is still operating today.

In addition to the six men who lost their lives in the explosion, Venti paid tribute to the life of former Connecticut State Rep. Linda Orange, who died in 2019 after a battle with pancreatic cancer. She had been a longtime advocate for increased workplace safety regulations following the explosion. Specifically, Orange helped pass legislation that outlawed the use of flammable gas to clean power plant piping.

“And I’ll never forget the night she called me,” Venti said. “I was sound asleep, but I was so happy to be [awoken] by this call. It was after midnight…. They had just got out of the Capitol. She said, ‘…There’ll be no more gas blows in the State of Connecticut.’”

Middletown Mayor Ben Florsheim ’14 was the first elected official to share his remarks.

Blumenthal explained that in 2018, there were 48 workplace deaths in Connecticut, a 37% increase from 2017.

“Today we mourn the dead, but we need to redouble the fight for the living, because workplaces in America are no safer today than they were 10 years ago, if anything, less safe,” he said.

“We’ll always remember Ron, and Ray, and the four others who were lost on that terrible day, and our friend Linda Orange, who we lost this earlier this past year,” Bysiewicz said. “And today we have the opportunity to reflect upon the hard and difficult and dangerous work that our brothers and sisters who work in the building trades do every day…. And we owe it to them to work very hard to make sure that they are safe, and we owe the same to our first responders, our police officers, our firefighters—who run in when everyone else is running out.”

“This was a preventable accident,” Courtney said. “This never should have happened. And it violated industry standards and violated best practices in terms of state agencies, yet nonetheless, because of a weak, ineffective lax system that we have of workplace protection in this country, it happened…. It is imperative that we recognize that we have a job to do here if we really care about making sure that we respect the memory of those lost their lives.”

Courtney highlighted two bills that he and some of the other elected officials present at the memorial service had introduced in the House of Representatives on Friday, Feb. 7 in order to push for stronger workplace safety laws. The Protecting American Workers Act (H.R.1074) moves to expand the requirements governing workplace safety and health, while H.R.838, sponsored by all of Connecticut’s congressional delegation, commemorates the tragedy by placing the names of the six workers who died into the permanent House record and and recognizes the need to strengthen existing workplace regulations.

Congresswoman Rosa DeLauro (D-CT 03), who co-sponsored both bills, emphasized the importance of honoring those who were lost by working to ensure that workplace safety is guaranteed in the future.

“We can come here and we can remember and we can honor their lives, respect their lives and what they did, and that is what we do here today,” DeLauro said. “But honoring and remembering and praying is not enough. It’s not enough. We are charged with a moral responsibility to do something that makes it possible for people to get up in the morning, to leave their families, to go to work and to know that they’re going home at the end of that day and that their families can know that they are coming back and they can be hugged and loved.”

DeLauro also delivered short vignettes about each of the men who died due to the explosion and stressed that commemorating them requires the creation of stronger workplace legislation.

“To fully honor them, we need to re-double any conviction that we have to ensure that such workplace tragedy is not repeated,” DeLauro said. “To ensure that terrible loss is not in vain, we have to continue to learn from the failures of that day, put in place ironclad protections to prevent these tragedies from happening again. We honor these workers today by better protecting all of Connecticut’s workers, and what we do today with the families is we remember with you, and yes, we mourn with you.”

President of the Connecticut Building Trades Council David Roche spoke about his memories of the day of the explosion and the importance of properly training new trade apprentices.

Roche also criticized legislation that was introduced as the 2020 Connecticut Legislative Session opened on Feb. 5, which he views as obstructing attempts to increase workplace safety.

“There’s legislation that came out this week as the legislative session opened that will water down licensing in the state of Connecticut,” Roche said. “These men that lost their lives were licensed tradesmen, and now they’re saying, ‘Well, we’re going to make it easier to get that license in the state of Connecticut….’ We need to fight that back.”

Director of Health and Safety at International Union of Operating Engineers Local 478 Kyle Zimmer, who was a first responder with the Connecticut Urban Search and Rescue Task Force One on the day of the plant’s explosion, called attention to post-traumatic stress disorder affecting workers in emergency services and building trades.

“Suicide is at an all-time high in the building trades, and just overall behavioral and mental health issues that we take to work every day, and it [weighs] on us and it takes away from our work ethics,” Zimmer said. “It takes away from our safety challenges. We need to wrap our heads around this. We need to make it right. We need to make it part of safety and working with OSHA…. Overall mental health is probably the biggest challenge we’re ever going to have in the safety issues, so please pay attention to it.”

Billy Crabb, son of Ronald Crabb, also gave a short statement in remembrance of his father.

“The love my father showed me was enough to last multiple lifetimes, and even though he may not be here physically, he will always be by my side forever,” Crabb said.

Venti closed the memorial service by thanking everyone who had attended and requesting that those in attendance leave with fond memories of the men who were lost in the explosion and a desire to help others.

“Do not leave here today with a heavy heart,” Venti said. “Leave here today knowing that you knew these brothers and you shared some great, great memories with them, some great times…. Remember the good times…. And the other thing I’m going to ask everybody is when you get out of bed and your feet hit that floor and you thank the good Lord for another day, remember to help somebody each and every day. Do one simple act of kindness. Put a smile on somebody’s face and help somebody in need. You never, never know what’s going on in somebody’s mind and what demons or what bridges they’re trying to cross.”