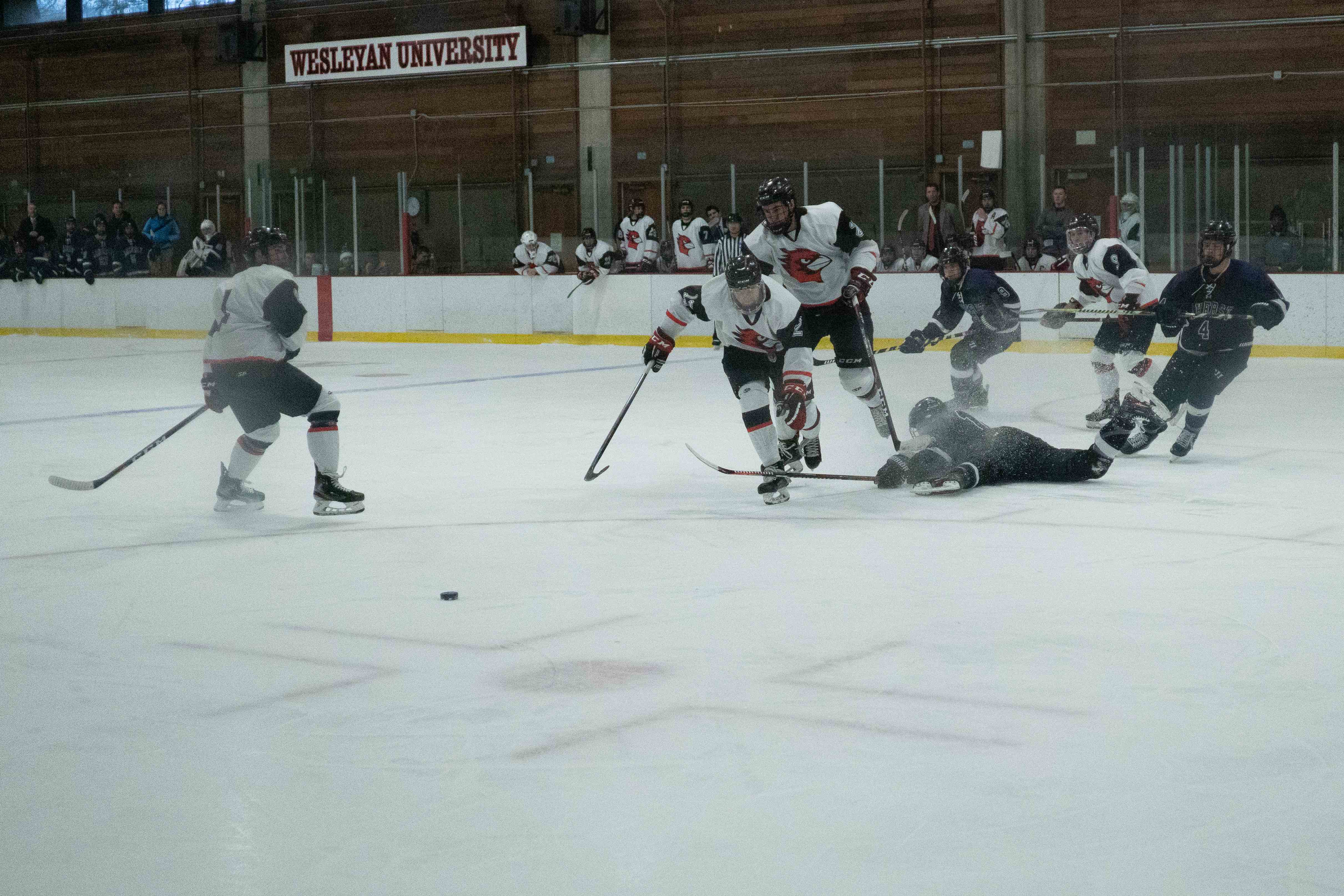 Last weekend, the men’s hockey team’s losing streak snapped at three games when they tied Amherst 1–1 in a hard-fought game. Before that, however, the Cardinals fell to Hamilton on Friday night in a tough 2–0 loss.

Both of the goals Hamilton scored came less than one minute apart, as Hamilton was able to capitalize twice before the end of the first period. The Continentals’ scoring effort was strong enough to secure the win. This was a difficult shutout loss, considering that the Red and Black had ample chances to score, outshooting Hamilton 25–13 throughout the game. But the Cards struggled to find the back of the net, and as a result, they now sit two and a half games behind the Continentals in the league standings, with Hamilton earning the tiebreaker after completing their season sweep of the Cardinals. On the defensive side of the puck, Tim Sestak ’20 made 11 saves in the losing effort.

The Saturday against Amherst saw similar offensive play from the Cardinals, as they once again had numerous chances to score and only found the back of the net once. Like Friday night, Wesleyan fell behind 1–0 in the first period when Amherst scored just 14 seconds into the game. However, the Cards were finally able to score after about 75 minutes of game action across their two weekend matches, as Tyler Wyatt ’20 scored off of a nice pass from Spencer Fox ’20 to tie it up at one.

In the next two and a half periods, both teams had chances but neither scored. After an additional five minute overtime period, the game ended 1–1. Sestak was stellar, making 46 saves to keep the game tied throughout. Despite the 0–1–1 weekend, Fox was not unhappy about how the team played in both games, as it was just a matter of scoring that prevented them from winning the games this past weekend.

“The team played very respectfully this past weekend,” Fox said. “We outworked the other teams, limited scoring chances against, generated ample scoring opportunities, and remained disciplined.”

Fox added that the main key in the two games was finally being able to finish their chances as a team and end their longest scoring drought of the season.

Next up, the Cards continue on their journey through the NESCAC; tonight they host league leaders Williams at 7 p.m., followed by a match tomorrow afternoon versus fourth place Middlebury at 3 p.m.

Williams has a league-leading record of 10–2 in NESCAC, with a 13–4–1 record overall. The Ephs are also tied with Trinity for the NESCAC lead in total goals scored with 59, and have the most goals in conference play with 40. Williams is similarly stout defensively, as compared to the Ephs, who gave up only 1.42 goals per game in conference play and 17 goals on the season, both of which lead the league. Having already faced and lost to the Williams juggernaut, Fox says that the key to flipping the script on the scoreboard will be to play a sound game overall and not give up too much on either end.

“The key to the Williams game will be to neutralize their transition game and counter-attacks,” Fox said. “They’re very skilled at pouncing on turnovers and capitalizing on their opportunities, so we will need to limit those as much as possible.”

While they may not be the powerhouse that Williams has been this year in the NESCAC, Middlebury has a respectable 5–4–3 NESCAC record with a 7–8–3 record overall. Despite having lost to Wesleyan earlier in the season, the Panthers have actually scored more total conference goals than the Cards this year and have given up one less goal on defense. Regardless of their opponents’ record, Fox stressed that the key to winning games to finish the season will be to get the recently-stagnated offense working again.

“A strong finish in conference play will happen if we score more goals,” Fox said. “We’re playing well defensively, generating scoring opportunities, and winning the majority of battles. It’s almost impossible to win when you score once a game, so filling the net more will be key.”