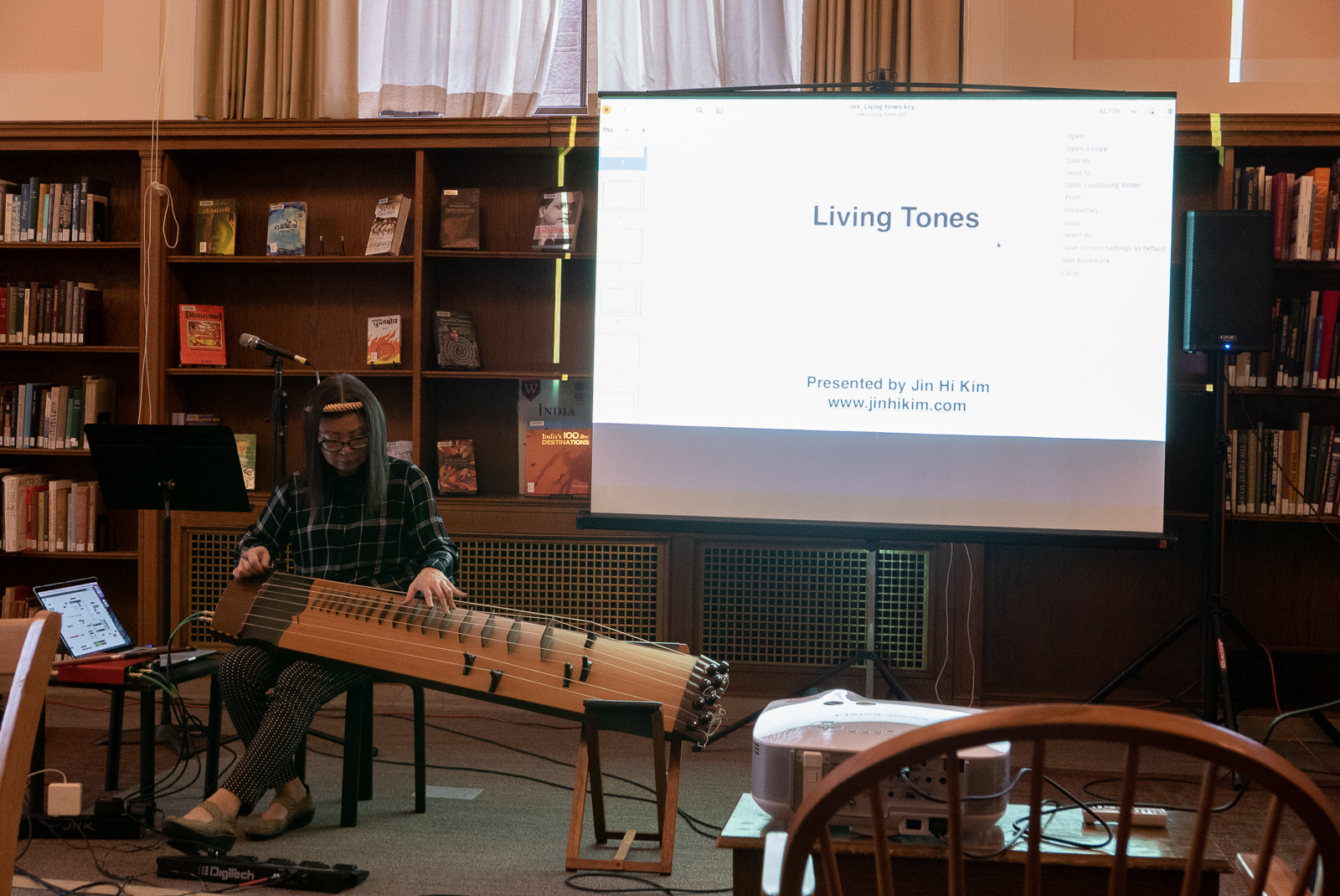 This past Saturday, the Wesleyan Center for the Arts put on a two-part performance, entitled “Hidden Volumes // Living Tones,” at Olin Library. The performance was put on in honor of Olin’s acquisition of notable experimental composer Jin Hi Kim’s scores, and was presented jointly by the Music Library, Music Department, and Center for the Arts.

Jin Hi Kim, a Guggenheim Fellow composer, has performed as a soloist in her own compositions at Carnegie Hall, Lincoln Center, Kennedy Center, Smithsonian Freer Gallery of Art, Asia Society, Metropolitan Museum of Art and around the world.

The first part of the performance, “Hidden Volumes,” which lasted from 12 p.m.–6 p.m., was an elaborate site-specific piece that was initiated by Associate Professor and Chair of the Music Department Paula Matthusen and visiting scholar Terri Hron in 2017. The piece was expanded to include more improvisers in this rendition, including faculty, graduate students, alumni, and other performers. The performances, which were scattered throughout the stacks, sometimes responded to the specific books nearby. Graduate student Marvin McNeill, for instance, performed a non-figurative trombone piece inspired by the adjacent book “The Call of the Wild,” that sounded like a wolf call echoing ominously through the stacks.

The day culminated in a performance of two of Kim’s compositions, preceded by a lecture by the composer on her career-long conceptual premise of “living tones.”

“[This philosophy calls for] the timbral persona of each tone generated [to be] treated with an abiding respect, as its philosophical mandate from Buddhism, a reverence for the ‘life’ of a tone, the color and nuance granted each articulation from Korean Shamanism,” Kim said.

In practice, this can mean a revolutionary approach to the ways in which groups of musicians play together. Kim also described her process of applying the practice to an orchestra, an ensemble where musicians are typically instructed to breathe and play with the other musicians as if they are a single body. Kim also explained that her philosophy and method of creating musical scores derived inspiration from the Korean concept of “sigimse,” which she described as a musical approach in which “each note has its own life.” Kim developed her own graphic symbols that appeared above notes in correlation to this philosophy. An index of the symbols that Kim utilized revealed just how specific these markings were, to the extent that the changing widths of repeated glissandos were specified.

The first piece, “Kee Maek”—which translate to “energy” and “pulse,” respectively—was performed by Assistant Professor of Music Nadya Potemkina on viola and graduate student Aliya Ultan on cello. Kim’s score was projected during the performance, giving the audience a glimpse into the complex system of markings that she had developed. Potemkina and Ultan changed positioning three times over the course of the performance, moving around the room together after each brief section.

Throughout, “Kee Maek” was a study in subtle variation, with the lack of a formal narrative structure emphasizing the similarities and divergences in tone, timbre and range of the viola and cello. At first, each instrument didn’t necessarily react to the other in a way that was obviously apparent, with each instead seeming to move at their own unique tempo. However, at times the two musicians also played in perfect unison, with each employing a range of unusual technical skills, ranging from bowing right near the bridge to sliding up to the edge of the fingerboard and then executing rapid, incredibly precise pizzicato plucks.

The second piece, “Exceeding II,” was performed by Jin Hi Kim herself, and was a truly stunning demonstration of the instrument that she is famed for inventing, the electric komungo. The komungo (or geomungo) is a traditional Korean instrument that is a part of the zither family: an oblong construction featuring six strings and both bridges and frets. In Kim’s adaptation of the instrument, she connects it to a live interact MIDI system, resulting in a sonic effect that is somehow both folksy and techno: minimalist in the scope of its melodic lines but intensely complicated in the layering of acoustic and electronic sounds that Kim achieves. Because of the MIDI system, it often felt like there were two related but distinct musical lines emanating from the instrument, one created by plucking the strings and another that was more of a synth-like echo.

Although Kim began the piece by plucking the strings with a long, thin, pick-like object, she came to use a broad range of techniques as the piece progressed, including plucking double-stop, rubbing the pick parallel to the strings over the bridges, using her fingers to slide down the strings directly, and using a more traditional acoustic bow. Kim’s motions slowly congealed into a pattern or arc as the piece went on, and then descended back into abstraction. Kim’s technique itself was brought to the forefront, with the sound of her pick hitting the string sounding almost like the clicks of a tap dancer.

Throughout the concert, it was made clear that Kim’s music is notable not only for its performance value but for the exceptional historical value that the innovation of her “living tones” scores represent in the canon of experimental music. An exhibit of Kim’s scores with historical context is currently on display in the first floor hallway of Olin, and her scores will be added to the Music Library collection.