Swim and Dive Overcomes Setbacks in Preparation for Championships 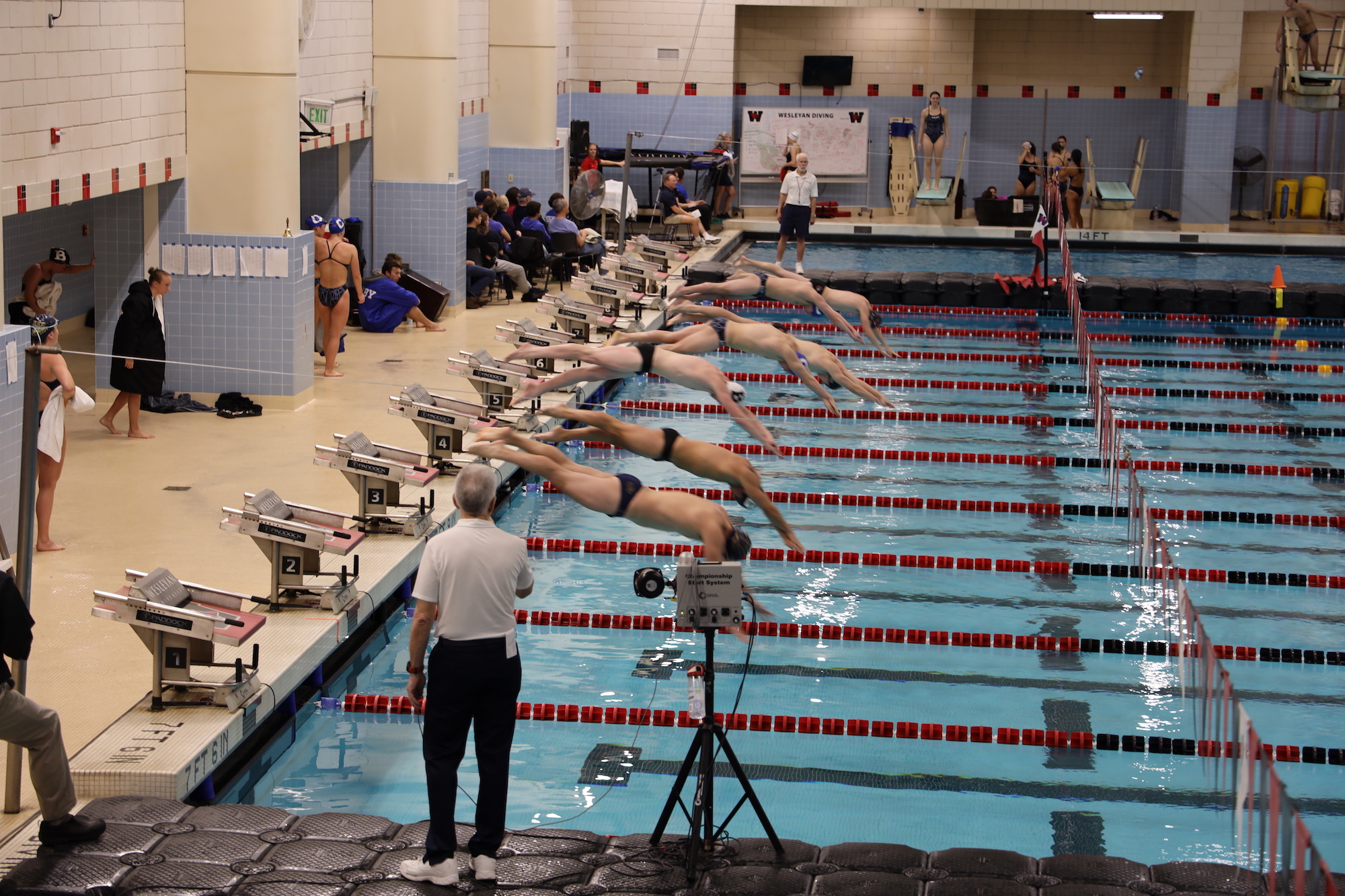 Swimming and diving has kicked, relayed, and splashed their way through January, closing out their regular season with a dual meet against Conn. College. Since wrapping up their first semester meets, the Cardinals have worked through a tumultuous training schedule, jumping into the competitive waters for five meets since the beginning of the year.

While most Wesleyan students enjoyed a seemingly never-ending winter break, the Cardinals were hard at work preparing for the second half of their season. However, training didn’t go quite as expected.

The team was set to train in Puerto Rico over break, but a 6.9 magnitude earthquake hit the island on Tuesday, Jan. 7. Due to lack of electricity and the threat of further earthquakes, the team had to return to campus just over two days after they’d left.

“Winter training is simply brutal, and when you have to spend it in Middletown, Connecticut instead of the tropics it doesn’t make it any easier,” Richard Ettinger ’23, a team member, wrote in an email to The Argus.

Peter Solomon, who coaches both the men’s and women’s teams, agreed that training back at Wesleyan was difficult for the athletes.

“Having to be on campus in January for an additional week was less than ideal; particularly when we were training so hard and the swimmers and divers were broken down, physically and mentally,” Coach Solomon wrote in an email.

Despite the setback, both Coach Solomon and members of the team believed that they made the most of it.

“[We were] able to push through, have some great practices, and even have some fun along the way with plenty of team meals and activities,” Ettinger wrote.

These activities included a bowling night, minute-to-win-it games, and even a team talent show.

“Watching the swimmers and divers laughing and having fun together was great to see,” Coach Solomon said. “The talent show proved what I already knew; just how talented Wesleyan student-athletes are in all facets of their lives. My vote for most memorable moment away from the pool has to be watching Zoe Paglia, a freshman diver, do Slam Poetry. It was quite impressive!”

“Some memorable moments included sledding down Foss Hill on a table and playing frisbee in 70 degree weather,” Brun wrote.

After their return to Middletown, the teams had four meets ahead of them in the regular season: a home match-up against Springfield College and Roger Williams University; a dual meet against Trinity; a NESCAC affair with Bowdoin, Colby, and Trinity; and their Senior Day against Conn. College.

The women’s team came out on top against Roger Williams and Trinity, beating the Hawks 157–124 and narrowly edging out the Bantams, 150–147.

Coach Solomon recalled the Trinity dual meet win as one of the most memorable moments of the regular season.

The men’s team, unfortunately, did not succeed against Trinity, falling 152–128. Out of the six matchups after training, their team garnered only one win: a narrow 149–144 victory over Springfield.

Between both teams, the Cardinals have won three meets this season. All of these wins have come after their return from winter break.

“While our dual meet records are not great, we traditionally save our best for the championship season when the team tapers and shaves for the NESCAC Championships,” he wrote.

With NESCACs growing near, the team’s practice workload and intensity has decreased so they can rest before their big meet. The Cardinals don’t lift weights, and they limit their yardage.

“At this point in the season it’s important to just trust our training and get excited,” O’Halloran said in a message to The Argus.

The Championships are one of the biggest events of the season, and Wesleyan is preparing to face off against every team in the NESCAC in one weekend.

“We are really working on keeping the team morale really high,” Murphy wrote in an email. “Last year having NESCACs in our home pool was electric. Everyone was up and dancing, laughing, keeping it light and fun and I think we are just trying to recreate that atmosphere at Middlebury this year.”

As the Red and Black prepare for the postseason, they reflected on the community and team dedication that have pushed them to their current success.

“I’ve been really proud of our team this season, our freshman class especially,” Ettinger wrote. “They’re all stepping up to not just score points for the team, but to also bring a culture of commitment and hard work to the pool each and every day. The 13 men and seven women that make up our class joined the program knowing that we were going to contribute and help rebuild Wes swim and dive.”

“I am so excited to see the energy and work ethic that the underclassmen carry throughout their time here and feel so proud to have been on a team with them,” she wrote. “I will miss the sense of community and love for sure, these people have become my family, we all have put in blood, sweat, and tears into that pool and it creates a bond like no other. I have met some of my very best friends on this team and I am forever grateful to have been a part of it.”

Wesleyan plunges back into the pool for the Championships in just over two weeks, traveling to Middlebury to compete Thursday, Feb. 20 to Sunday, Feb. 23.

“We can’t wait for NESCACs,” Ettinger wrote. “It’s all we’ve been talking about. I know Wes will swim lights out.”