This review contains spoilers for the both the graphic novel and television show “Watchmen.” 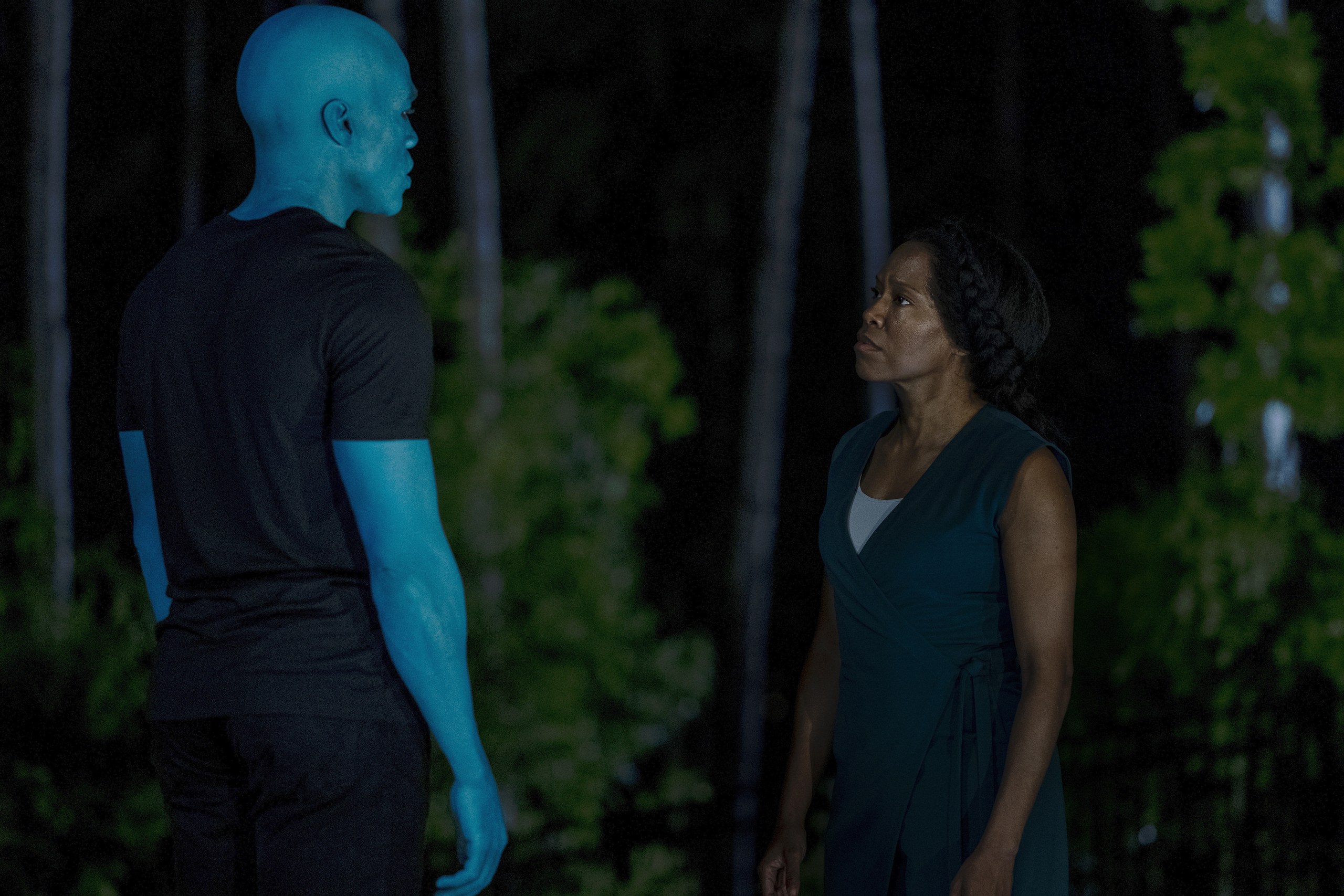 The 2019 TV show “Watchmen,” created by Damon Lindelof and based on the 1987 graphic novel written by Alan Moore, is incredible. It not only embodies the graphic novel but surpasses it, bringing the 1980s into a modern context while staying true to the moral origins of the book. In “Watchmen,” the world is dark and refracted, it is dystopian and warped, it is thrilling and recognizable.

The graphic novel takes place in the 1980s, centering around a group of vigilantes dealing with a mysterious killer who is picking them off, and advancing nuclear war. It exists within the Cold War-esque dread of impending, unstoppable attack, which vigilantes are no longer truly equipped to handle. It’s an excellent, complex story, dealing with characters in the aftermath of vigilante glory days.

But it also has some gaps and oversights, which “Watchmen” the television show seeks to fill in, while simultaneously refraining from doing so on the graphic novel’s original terms. The show places us squarely in 2019, with the Watchmen universe built in the 1980s extended into the now.  The elements of mid-to-late-century America that were ignored in the graphic novel—including experiences of Black Americans, as well as the political and racial dynamics between the U.S. and Vietnam—are confronted in the television show. This format allows new characters to operate within a Watchmen world, and also gives proper space for poorly treated old characters (most of whom are women).

In the opening few episodes, the show builds subversion upon subversion. We are introduced to an uncanny alternate universe America, with President Robert Redford having extended his terms indefinitely since the 1980s, and the dynamics between police and citizens obscured. Everyone is masked: police, vigilantes, and the white supremacist organization 7th Calvary, which operates as the central force of evil within the show. Masks and clothing signify allegiance, but because masks can be removed and replaced, no one can be safely marked as one side or another. The quintessential vigilante question of masked identity (Who does someone become when they wear a mask? How does a mask obscure morality?) has thus been overtly extended to police, to white supremacists.

The show follows Angela Abar (played by Regina King), a Black detective who is working with the police department in Tulsa, Okla. Early in the show, the police chief, who is at first apparently likable and close with Angela, is killed via hanging. Angela must work to figure out who killed him. She at first is pained by his death, until she realizes he was a member of the 7th Calvary, and that it was her grandfather (played by Louis Gossett Jr.)—an original member of the vigilante group The Minutemen—who killed him. These reveals and subversions leave the audience initially confused as to characters’ morals and intentions, until they emerge suddenly in moments of blinding clarity. It is as though characters’ masks are being removed. Angela is constantly fighting through to the central intentions of the people she is surrounded by. She operates with ease, experience, and a potent, unwavering distrust.

Much of the time, the show throws viewers into the deep end without explanation. In the very first episode, when viewers are operating on no context whatsoever, some of the complex racial and police dynamics emerge during an extraordinary scene in which a white man driving a truck gets pulled over by a Black police officer wearing a yellow mask. The stop appears at first to be arbitrary and fairly routine, but when the man driving the truck reaches into his glove box to get the registration, the police officer spots a faded black and white mask. At this time, viewers aren’t sure what this signifies, but the police officer knows. He returns to his car and calls his office, requesting that his weapon is released from its lock, saying that the man has a “Rorschach mask.” But by then it’s already too late—the man in the truck, now wearing the mask, has shot the police officer a dozen times.

This scene shakes modern dynamics of race and police, setting up a scenario in which a police officer, hiding his identity (which, as a viewer, seemed initially suspicious, given that hiding officers’ identities would prevent them being held accountable for their actions) seemingly arbitrarily pulls over a vehicle. In modern America, police stopovers are often poorly masked acts of racism, with people of color pulled over at exponentially higher rates than white people. Yet in this show, we see a scene that, at first, appears to flip these dynamics—until the person in the car reveals himself to be a white supremacist. The nature of the reality begins to unfold: We learn later that the Tulsa Police Department has been haunted by racist attacks from 7th Calvary, and subsequently police officers don masks to protect themselves. The black and white mask worn by the white supremacist is an homage to the character in the graphic novel Rorschach, who by the end of the graphic novel sends his diary—filled with commentary on the bleak underbelly of America, scoured with scum and decrepit laziness—to an alt-right magazine. Rorschach has a self-righteous anger in the graphic novel, which translates to the white supremacist characters in the show, who champion him as a martyr.

The show converges onto a few central themes, including that of overlooked history. Tulsa is the site of the largely ignored Tulsa Race Massacre, during which over 300 Black Americans were murdered by white supremacists in 1921. “Watchmen” forces viewers to confront this element of America’s past, particularly through an extremely poignant episode called “This Extraordinary Being,” during which Angela takes a bottle of pills called Nostalgia (the name is a reference to a body spray sold by Adrian Veidt in the graphic novel) and is transported into her grandfather’s memories. Moving through his memories—Angela-as-her-grandfather becomes a cop and experiences extreme racism in early 20th century America—she learns that her grandfather was the first Hooded Justice (consequently revealing that the first Hooded Justice was Black). It is a deeply moving episode, imbuing the character of Hooded Justice with a far stronger emotionality than he originally receives in the graphic novel.

My favorite episode might be episode five, “A Little Fear of Lightning,” which covers the origin of the character Wade Tillman (Tim Blake Nelson), A.K.A. Looking Glass. Wade is a detective for the Tulsa PD and works with Angela to track down the 7th Calvary. Wade’s mask is almost a cousin of the Rorschach mask (though his character is completely different), made of a shiny material that reflects in vaguely abstract, blotted patterns. He wears the mask not out of bravery, but out of fear. During the 1985 squid attack on New York City caused by Adrian Veidt, mirrors were the only thing that protected against the sonic boom that killed half the residents of New York City, and mirrors were what saved Wade’s life. Placing the squid attack at this point within the context of the show, rendering it through the eyes of a character we’d already met, brilliantly demonstrates the impact of this attack on America while simultaneously shedding light on the origins of Wade’s personality. We see the horror of the attack, and cannot comprehend how it could have happened, how it could have been justified. As a stand-alone episode, it is incredible.

There are plots I can’t go into without derailing this review entirely, as much as I’d like to, including one that takes place on Europa and involves Adrian Veidt (Jeremy Irons) murdering dozens and dozens of Adam and Eve figures created by Dr. Manhattan (Yahya Abdul-Mateen II). Dr. Manhattan himself poses one of the more complicated parts of this show. The decision to make him Angela’s husband works in some ways; I thought the various loops of time and love played out in an interesting way. But I can’t help but feel that the plotline felt forced, that the reveal felt, in a show that regularly allows extraordinary events to take place, almost too extraordinary.

The other essential problem I found with the show is that once the world began to fill in, the astonishing nature of “Watchmen’s” reality becomes more mundane, and the show becomes less jaw-dropping. The first squid rain is met with surprise from viewers and annoyance from characters; the second is met with expectation from both. Of course this is the nature of much sci-fi and dystopian media: The concept can be more interesting that the action takin place within it. On the other hand, we’re given fascinating players to work with, who move in this world with single-minded cleverness. And of course, there’s the movement of time in this show, which emulates the Dr. Manhattan-esque experience of non-linear timelines. We are thrown into the past and back into the present again. In this way, the show keeps a foot in Moore’s grotesque 1980s and another in Lindelof’s disjointed 2019. Some characters move between them, others have their eyes set on the future.

Ultimately, this show is meant for the now. Placing “Watchmen” in the present was an effective move, as we see the aftermath of the world created in the 1980s, and an America grappling with issues closely paralleling the ones we grapple with today. The show maintains its commitment to vigilante heroism and morality, but its exploration of American history, and the impacts of the past on the present, are what make the show equal parts compelling, horrifying, and entrancing.