This article contains some spoilers for Netflix’s “The Circle.” 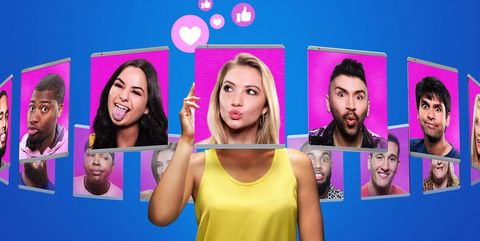 “Welcome to The Circle, the real-life game that asks, ‘how far would you go to be popular on social media if there were 100,000 dollars at stake?’” Michelle Buteau, the host of the new hit reality show, “The Circle,” says slyly to the camera.

Buteau’s voice is simultaneously witty, invasive, and explanatory on “The Circle,” Netflix’s recently released, all-things-social-media show. “The Circle” takes place in one building, but each of the eight contestants has their own room, supposedly perfectly tailored to their respective style and living habits. They don’t get to see one another; instead, they communicate via the “Circle,” which is a “voice-activated social media platform.” The Circle has all of the players’ profiles, messaging platforms, a news feed, and even icebreaker games so that the contestants can learn more about each other.

In order to win the game, players must become the most “well-liked” contestant. Every once in a while—timing on the show, you’ll find, is outrageously random—every contestant will have to participate in ratings. Contestants rank the other profiles from one to seven. While the top-ranked person is supposed to be the most popular, sometimes contestants get strategic with their rankings by ranking their alliances high, or sinking a friend lower in the rankings to promote competition.

Watching people talk to screens—and themselves—for over ten hours might not seem immediately appealing, but watch a few minutes of the pilot and you’ll be hooked. There’s love. There’s loss. There’s betrayal.

Bonds form quickly, whether contestants are looking to flirt because they like someone’s pictures or because they’re a catfish trying to get someone on their side. There are bromances, brotherhoods, a #prettygirls group chat, and some flames turned friendship. Each episode starts and stops on a wildly different phase of the game, so if you’re not entertained by the personal interactions of the show, at least the game’s mechanics will keep you guessing.

By the end of the show, the last five contestants are ones who’ve been there since the beginning. The cheesy, terribly long finale shows a reel with clips from each contestant, and there’s a ceremony with every contestant who’s passed through. Everyone seems friendly, even after blocks, betrayal, and supposed heartbreak. When they’re about to announce the winner, the top five contestants hold hands with bated breath to see who’s winning the money. The winner isn’t a catfish, but rather someone who’s been praised for their honesty, kindness, and all-around “genuine” nature.

Consistently, those who topped the ratings were ranked higher because other contestants thought they were honest and real. Contestants tried to find and get rid of catfishes in the game, seeking them out as if they were the enemy. Again and again, players would praise others for how “real” they thought they were.

There’s a moral to this story that the show repeatedly makes clearer and clearer: to be well-liked on The Circle, you have to be genuine.

But how can you be genuine in a game that’s all about social media?

One contestant, Bill, who shows up in episodes six through nine of the show, immediately called out the other players for being too nice. While everyone seemed buddy-buddy at that point, he thought they were acting fake. The other players soon blocked him for his attitude.

At the final ceremony, Bill said if he got another chance to go on “The Circle,” he’d just pretend to be nice.

Bill’s got a point: while some contestants may have been using their own pictures, that doesn’t necessarily mean they were being true to their character.

You’re going to communicate with others differently if you know they’re going to rank you at a later point. You’re going to be nicer to people you might not have been nice to if you think they’ll help your rating. You’re going to act differently knowing you’re being watched and filmed at almost every moment. You’ll even end up sending different messages if you have to speak them out loud (imagine having to say “tongues out emoji” when speaking to someone).

If you’re only relating through a screen, you’re curating a personality. If you’re trying to become more popular and well-liked, you’re going to adjust what you say and post. You may be sharing authentic details, but you’re always performing for others—and that doesn’t mean you’re being genuine. It begs the question: can we ever be genuine on social media?

We may not be locked in a room competing for $100,000, but that doesn’t mean we’re not curating our posts to appear a certain way. We may not be worried about getting blocked from a game, but we’re aware of who likes (virtually and not) what we’re sharing. We may post about our own lives, or make excuses and say we’re posting “for ourselves,” but we might worry about what others think and say about our profiles. “The Circle” doesn’t offer an alternative social media universe; it dramatizes what we’re all already familiar with.