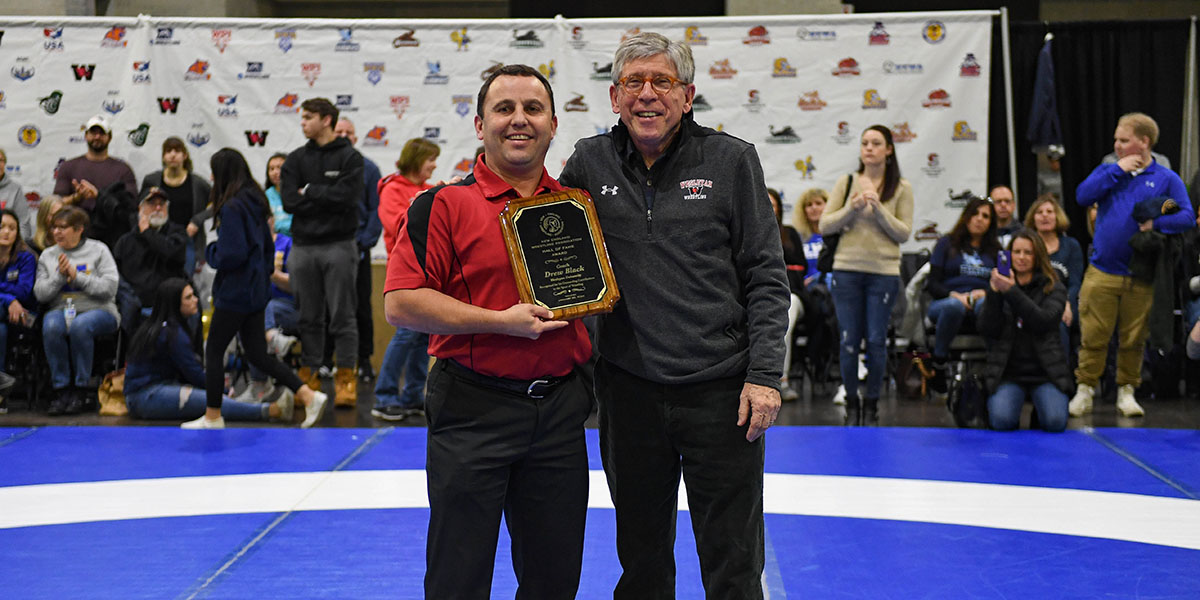 Last weekend, Wesleyan’s head wrestling coach Drew Black was inducted into the New England Wrestling Association (NEWA) Hall of Fame. A prestigious honor, the NEWA Hall of Fame is home to some of the greatest wrestlers and wrestling coaches in the history of the sport.

After his induction, Black shared his feelings on receiving the honor.

“It’s always nice to be recognized by your peers,” Black said. “Those are the people who nominate you. I’ve done twenty-two years of conference meetings [with New England coaches], and there is always, ‘Hey, who do you bring to the table to nominate?’ So, each coach comes, and you might have a few All-American wrestlers [to nominate]…but you never come in with your own name.”

With his induction into the NEWA Hall of Fame, Coach Black joins a select club of Wesleyan greats such as current Athletic Director Mike Whalen ’83, former wrestling coach John Biddiscombe, as well as All-Americans Scott Steel ’80 and Matt Skalla ’85. According to Black, Biddiscombe was one of Black’s biggest influences as a coach, and he ultimately presented him with the Hall of Fame plaque.

“You don’t get in [to the Hall of Fame] just because you’ve been there a long time,” Black said. “It’s about longevity, consistency. Kind of like wrestling, it’s about durability…motivation, drive. You keep putting in your work and your time, and you’re looking for the process to yield great results. I’m thankful that peers felt highly that I’ve been doing a good job and I’ve been consistent and committed.”

Despite the length of time Black has been coaching, he doesn’t view himself—or his program—as old.

“Twenty-two years to me…I don’t think about it being a long time,” Black said. “You know, twenty-two years…when I say that to people, they’re like, ‘Wow, wow.’ And I’m like, ‘Oh, okay, I guess that must be a long time.’”

Coach Black’s energy is distinct, whether it be in the hallways of Freeman Athletic Center, in his office, or on the mats of the Biddiscombe Wrestling Room. He is engaged and energized, qualities which have certainly contributed to the durability and success of his career. As a coach, Black applies his passion for wrestling on a daily basis.

“It’s like being an athlete here,” Black said. “You come everyday. You’re excited about being here, and you enjoy what you’re doing. You look forward to working hard everyday.” 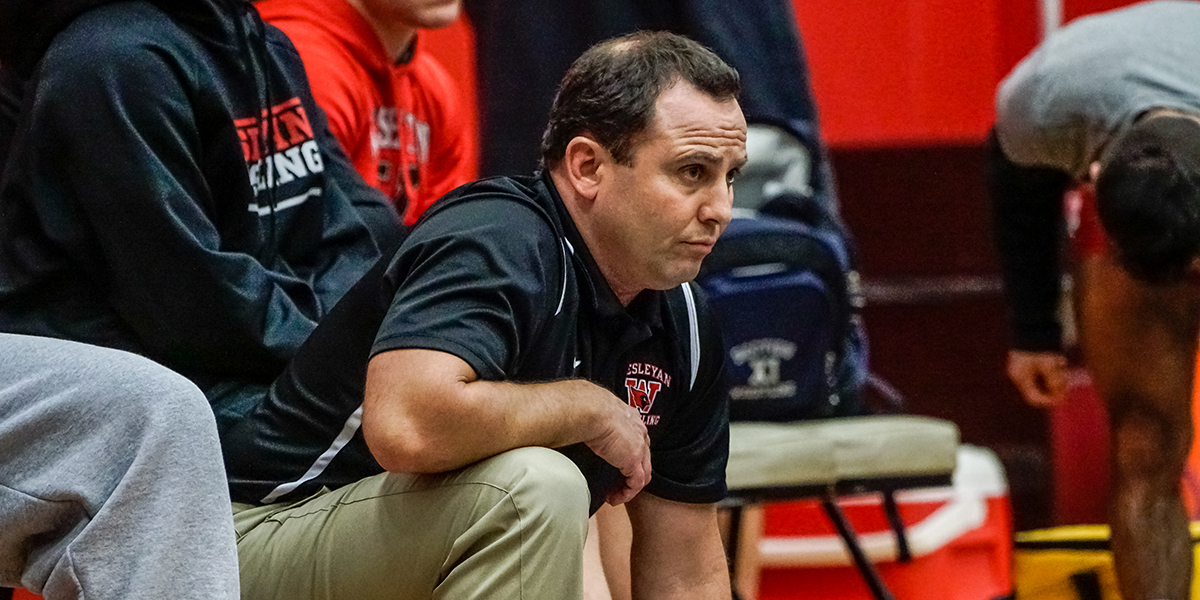 For Black, this mentality started back in New Jersey, where he grew up playing sports that didn’t exactly fit his size. His freshman year of high school, Black was four feet, eight inches tall and weighed 75 pounds. Black wanted to play basketball and football through high school, but especially football, because he craved the physicality of the sport. Despite his smaller size, Black became a starter on the football team as a kick returner, wide receiver, and defensive back.

But Black’s brother was on the wrestling team. Having never wrestled, Black went out for the team, accompanied by his brother. Black quickly fell in love with wrestling: the contact, the strategy, the way he could use his size as an advantage.

This sparked Drew Black’s lifelong passion for the sport. He would go on to wrestle five years at Syracuse University.

Despite his love for wrestling, Black’s journey into coaching the sport was complicated. After graduating from Syracuse, Black hoped to be an athletic trainer because he loved athletics and the idea of being around a team. But more than sports medicine, Black loved the responsibility and physical training that came from wrestling.

“I was so centered on what I was doing to be successful,” Black said. “I didn’t think I was ever going to [coach], but then I was like, ‘What am I going to do for a career?’ So, I looked at teaching and coaching, mainly to get my teaching certification…at a high school in Ohio. They needed a junior varsity wrestling coach. I was in grad school at Kent State, doing my student-teaching, and I take the job. The first tournament I went to, up early, on a school bus, with like twenty high school kids. At the end of the day, I go, ‘They don’t even have to pay me to do this.’”

From his first day coaching wrestling, Black was hooked. His journey in coaching would take him across the country from a junior college in Arizona all the way to the Wesleyan in Connecticut.

Black has already had quite the career at Wesleyan, coaching numerous All-Americans, winning the NEWA Championships for only the second time in the University’s wrestling history (2012), and placing 18th overall in the NCAA Championships in 2018.

Although wrestling is a sport played by individual wrestlers, Black doesn’t necessarily see it that way. As a coach, he loves the communal, team aspect more than anything.

“Team accomplishments matter most,” Black said. “It’s a team sport—guys collaborating to get a team outcome.”

Even with his recently earned Hall of Fame status, Black still looks to the future, striving each day to help his team succeed. For him, the process of developing oneself and enjoying hard work is crucial. There is a bright future for Wesleyan wrestling as their Hall of Fame coach of twenty-two years continues his journey with determination and a smile on his face.

Ben Owen can be reached at bowen@wesleyan.edu and on Twitter at @benjaminowen28.