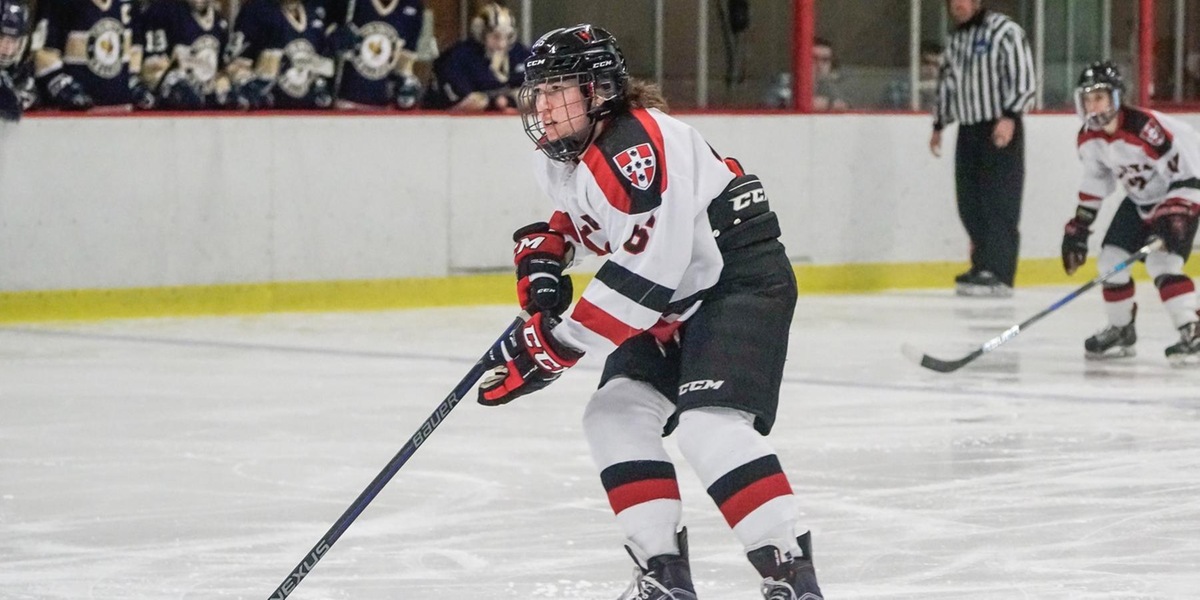 Following a tough 0–2 start to the season, women’s ice hockey sought to bounce back against a struggling 1–5 Salve Regina University team.

Wesleyan began their home opener in a powerful fashion, scoring first about six minutes into the first period. Allie Damren ’20 connected with Audrey McMahon ’22, who was in perfect position to find the back of the net, bringing the score to 1–0. The Seahawks, as the result of an opportune power play, had a chance to tie the game at the 16:48 mark, but the shot was blocked by Cardinal goalie Sam Smith ’20. The Cardinals continued their control of the game when Sophie Marra ’21 stole the puck before firing it into the corner of the net to take a 2–0 lead.

At the beginning of the second, the Seahawks looked to take advantage of a breakaway opportunity, but Smith stopped them yet again. The Cardinals brought their lead up to 3–0 when McMahon swiped an errant Salve Regina pass, and then followed up by beating the Seahawks goalie for her second goal.

While Salve Regina was able to tighten the game by scoring two goals in the third, Wesleyan played effective defense for the rest of the game. The Cardinals allowed just one shot by the Seahawks in the final seven minutes of the game, preserving their one-goal lead and securing their first win of the season.

Four days later on Nov. 30, the Cardinals traveled to Suffolk University to face the 2–5–2 Rams.

The first period was a battle of defenses, with neither team able to score a single goal.

About 10 and a half minutes into the second period, the Rams managed to get on the board first when  Suffolk’s Maddy Burton got puck past Smith. Wesleyan responded with 13:39 remaining in the period when Marra notched her second goal this season. The Cardinals clinched the game with a power-play goal by Damren, off the assist from Bridget Cornell ’23.

The Cardinals scored two more times in the third period during four-on-four action. Alicia Nickolenko ’20 found the back of the net at the 11:04 mark, then Cornell followed up with another goal just 35 seconds later for the first goal of her career. In their most dominant performance yet this season, Wesleyan won the game 5–1. What’s even more impressive is that each of Wesleyan’s five goals came from a different player, showcasing their vast offensive depth.

The next day, on Dec. 1, Wesleyan faced off again against Suffolk, at home this time. This game saw the return of All-American goalkeeper Allegra Grant ’20, who had 29 saves.

The Cardinals got on the scoreboard quickly and in a big way. The Red Birds scored three goals in the first period. The first goal came when Maggie Curran stole the puck in transition and sent a pass to Sophia Marra who blasted the puck into the net.

The Cards quickly followed up Marra’s goal when McMahon put in a loose puck about a minute and a half later. But the Birds weren’t done scoring. The Cardinals went up 3–0 when Curran fired a slapshot past the Rams goalkeeper.

The second period was another defensive slugfest with no change in score occurring.

Suffolk eventually scored in the third period when a rebounded puck found its way into the net, ending Grant’s shutout.

Grant’s defensive prowess was crucial for Wesleyan securing their third straight win, as she made a number of huge defensive plays down the stretch to maintain the Cardinal lead.

Sophomore Audrey McMahon has also been a huge part of creating and maintaining this win streak, managing to score four goals over the last three wins.

“I think the most consistent factor leading to my goals has been great efforts by my teammates,” McMahon said. “They have been a result of smart, hardworking plays from all five players and at both ends of the ice. My linemates have been doing an amazing job of controlling the puck and getting shots on the net, I just happened to get the rebounds.”

“I think we did a great job of learning from our first NESCAC games,” McMahon said. “We demonstrated a lot of good habits in those games, but we were also able to narrow in on areas of our team play that we could improve on. We’ve been working hard in practice to improve those areas, and I think that really helped us over the last few games. I think we can continue to find success by building off of the great energy and competitive mentality we have in practice, as well as focusing on the little habits and details that go into a full three periods of hockey. We’ve shown a lot of resiliency in these last few games, and I think that will translate well into confidence that we can beat anyone when we do the little things right and play as a team.”

The Cardinals hope to continue their hot streak when they play back-to-back home games on Friday, Dec. 6, against Saint Anselm College and on Saturday, Dec. 7, against Plymouth State University.