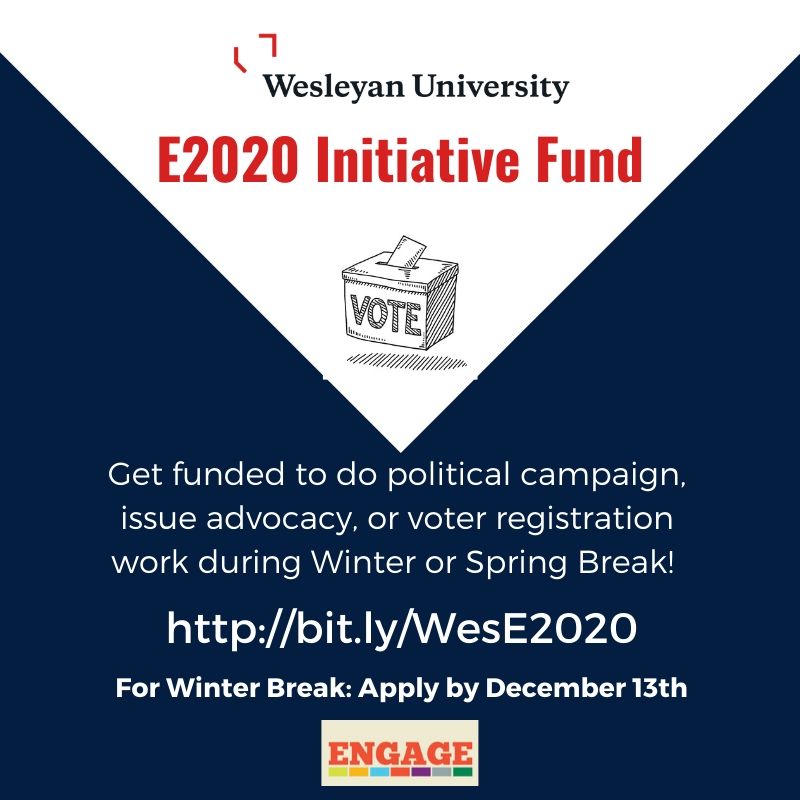 The University is launching an initiative called E2020 to promote civic engagement in the 2020 election. The program has two major facets: financial support for students who wish to participate in election campaigns or other political work, and the creation and promotion of civic-oriented courses in the University curriculum.

The intention of the program is to actively engage members of the University in work in the public sphere, according to Interim Provost and Senior Vice President for Academic Affairs Rob Rosenthal.

“This is part of a major thrust of the University, the engaged University, that students, and faculty and staff too, should be engaged participants in public life,” Rosenthal said.

The program was announced on Dec. 2 in an all-campus email signed by Rosenthal, Director for the Jewett Center for Community Partnerships Clifton Watson, and University President Michael Roth ’78. In addition to the announcement of the creation of the program, the email stated that students would be able to receive financial support for political work over winter break. This could involve working for an individual, on a specific issue or campaign, registering voters, or something else affiliated with the election cycle.

The University has previously provided financial aid to students who wish to engage in political work. Watson, who is involved primarily in student engagement within this initiative, worked on a similar, smaller scale project out of the Jewett Center in the fall of 2018, which offered students grants to work with political campaigns over fall break. Watson emphasized that E2020 would be a much larger version of that program, and would aim to make political engagement accessible.

“Students will submit a budget—there are a few requirements for the application—but one of which is students submit a budget for the work that they would like to engage in, which would include costs associated with travel, food, lodging, et cetera,” Watson said. “But we certainly want to ensure that this process is one that can be accessed by folks who have to keep an eye to earning wages, we want this to be one that can be accessed by students of various socioeconomic backgrounds, so we want to ensure there’s a way for folks to recoup potentially lost wages, if they were interested in engaging in this process.”

Students who submit an application and budget, whether for the winter term or future terms, can then receive funding that will allow them to pursue work related to the 2020 election. According to Rosenthal, the funding for the initiative will come from a donor who is interested in the idea and has pledged money for it. Rosenthal added that the project would not use University funds, and if more money was needed, it would be solicited from additional donors.

An additional part of the E2020 plan is the creation and promotion of courses that have an orientation toward the 2020 election, none of which have yet been formed. Rosenthal emphasized that service-learning courses—which are courses that engage students in both theoretical work and practical work within the community—would be ideal for this project. However, he said that not all courses that would fall under this initiative would need to be service learning and courses could come from across the curriculum.

“What I’m working on…is to get faculty to offer many more courses that speak to the election in any way,” Rosenthal said. “Ideally, they’ll be a lot of service learning courses…where students are actually doing something, as well as learning something, or courses with some sort of participation. We hope to have some courses that we call ‘harvesting courses,’ so if you go off, say in the summer, and you do a month of campaigning, then there’s a course when you come back that uses that experience as part of the material that you’re discussing. And we hope to get a very wide range of courses.”

These courses could include a computer science course on encryption, or a course in the English Department on novels about the public sphere or contentious political races. Rosenthal said that it’s up to students and staff to design what they’d like to see within this program, and that the process will require creativity.

“We’re really pushing everyone—students, faculty, and staff—to be as creative as possible,” he said. “It just seems such a momentous time, no matter how you feel about the issues, it’s really a momentous time.”

Watson spoke to some of the intentions of the program, highlighting the role of civic engagement within a University setting.

“We want to bring attention to the critical importance of students being engaged in the political process,” he said. “And so, our work throughout the year really supports this notion of encouraging students to engage civically in a way that really strengthens the civic fauna of our community. We recognize that the political process is one of the ways people are civically engaged. We recognize that as a critical component of civic engagement, and we want to ensure that we never lose sight of its importance. And I think our work is reflective of that throughout the year, but I think this is a really important way for us to sort of display that those principles are really important to us, across the political spectrum.”

Roth, Rosenthal, and Watson all emphasized that the intention of E2020 is not to push students in a particular political direction. The program instead is aimed at providing students with the means and motivation to civically engage with their communities, specifically within the next 11 months of this election cycle.

“I’m not saying everybody should go and work for one kind of candidate, that’s not my role,” Roth said. “My role as a teacher and as the president of Wesleyan certainly includes trying to facilitate student involvement in this political cycle, and beyond.”

Rosenthal and Watson spoke to some of the potential challenges of the program. Rosenthal said that one of the difficult aspects may be encouraging students to perform political work far from Wesleyan, in areas where work may be more critical for a particular campaign or issue. Though Watson anticipates difficulty in getting the word out to potential applicants, he’s been encouraged by the fact that applications had already been submitted by Wednesday, Dec. 4, just two days after the program’s launch.

“I think this is perhaps relatively new for us, and so I think the challenge of getting the word out across campus—so that a broad section of the student body is aware that this is an opportunity—is certainly something that will be a challenge,” Watson said. “I think we’re off to a good start, though….We’ve gotten, I think to date, already four applications in [for the winter].”

Rosenthal and Roth see E2020 as a potential blueprint for other schools.

“If this works well, we’re going to start talking to other colleges and universities and saying they could be doing this too,” Rosenthal said. “Maybe they’ll be a 100,000 students out there in the 2020 election who might not have been.”

“I think it’s going to take a big effort from everybody,” Roth said. “I’m hoping this is not going to be 20 to 50 students. I’m hoping it’ll be a lot of people. And I hope—this is maybe a little immodest—but I hope other schools will say, ‘Oh look at Wesleyan. We can do that.’ At UConn, we can do that, at Michigan, we can do that at Wisconsin. That would make a tremendous difference, potentially. And not telling people what party to go to, but just making it easier for people to say that elections matter.”

Applications for funding for the winter session are available online and will be open until Friday, Dec. 13.