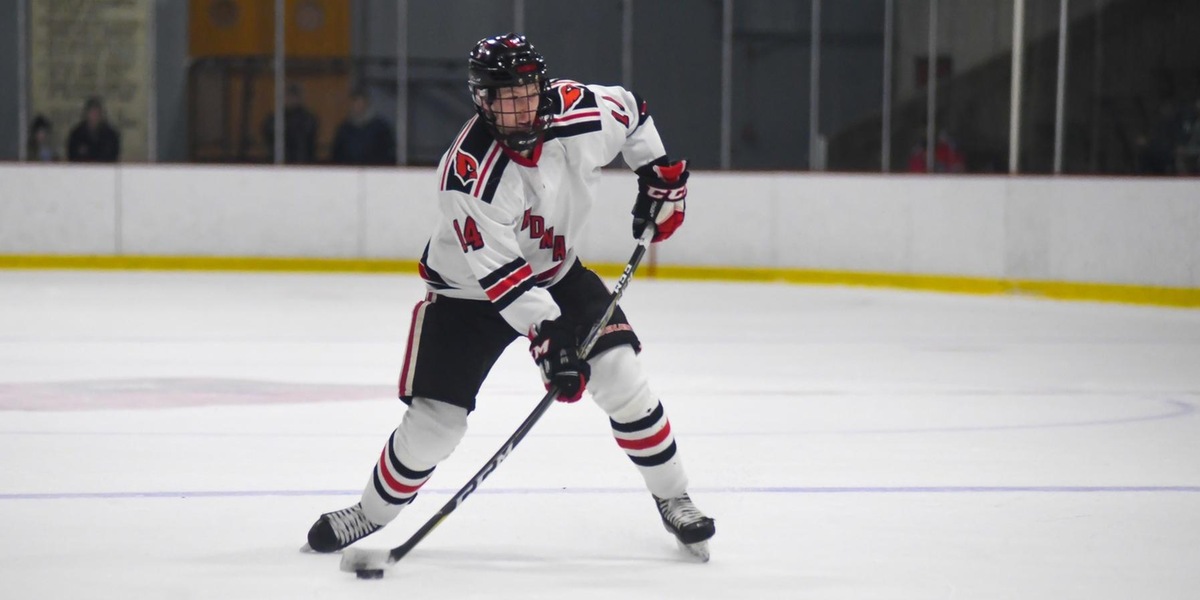 The men’s hockey team is off to a successful start this season. In their first six games, they have a 3–3 record overall and a 2–2 record in NESCAC play, with wins over Tufts and Amherst.

In the opening game of the season against the Jumbos, the Cardinals came out strong, scoring three goals in the first 10 minutes of the game to take a 3–0 lead that they never gave up. They then added two more goals as the game went on, leading to a 5–3 final score. Tyler Wyatt ’20 led the Cards in the offensive effort, scoring four goals in the victory. On the defensive end, Tim Sestak ’20 made 28 saves to secure the win.

Following the opening victory, the Cards then took on a tough Conn. College team and lost by the score of 4–1. The Cards came out fast during the first period, hitting the post numerous times and putting pressure on the Camels defense, but they could not find the back of the net. The Camels then scored with eight minutes left in the first period to take a 1–0 into intermission.

The second period mirrored the first as the Cards had chances to tie it up, including a penalty shot, but could not convert. The Camels once again scored towards the end of the period to take a 2–0 lead into the third.

In the final period, the Camels were the stronger team as they scored two goals to take a 4–0 lead. Wesleyan was finally able to get on the board though with just over two minutes remaining when Jordan Rose ’21 scored his first goal of the season.

The Cards then looked to bounce back in their first road trip of the season against Hamilton and Amherst. Against the Continentals, the Red and Black lost a close game by the score of 5–4. The game was back and forth as Wesleyan had a 2–1 lead at the end of the first before Hamilton scored three times to take a 4–3 lead into the third. Hamilton then added a fifth goal in the third to increase their advantage to two, but the Cards immediately responded within five minutes to get the deficit back within one with just under 15 minutes to go.

Unfortunately, though, they could not find the equalizer before the final buzzer sounded. The offensive effort for the Red and Black was spread out as four players each contributed a goal, which shows the depth the team has this year. In goal, Sestak made 31 saves in the loss.

However, the Cards were able to rebound in a Little Three matchup against Amherst, winning by a score of 4–1. Depth in the roster once again played a huge role, as the four goals once again came from four different players. Despite the lopsided score, the game was actually close in the beginning, as it was tied 1–1 midway through the second period. Emmet Powell ’23 then scored to give the Cards a lead they never relinquished as they tacked on two more goals in the third.  In net, Sestak made a season-high 37 saves to secure his second victory. Following this stretch of four conference games, the Cards then played their first two non-conference games of the season on the road, falling to Saint Anselm College 7–1 before beating SUNY Potsdam 6–2.

As the record shows, the Cards have been inconsistent in games, alternating wins and losses. Spencer Fox ’20 says that is something they need to work on.

“The team has been streaky so far this season,” Fox said. “The potential is evident, but our consistency needs to be better so we can put together a full 60-minute game every time we step on the ice. We’ve only done that once so far, handily beating a strong Amherst team 4–1.”

Despite the high number of goals that the team has scored so far through six games, Fox highlights the defense and goaltending as the teams’ biggest strength so far.

“The keys to our victories have been a team commitment to defense and strong goaltending,” Fox said. “When our forwards apply pressure on the backcheck it allows our defense to close gaps and play physically. Blocking shots, clearing rebounds, and chipping pucks out of the zone are all little aspects of the game that enable us to feed off each other when we’re working hard away from the puck.”

Next up, the Cards have one more game before the holiday break on Friday night on the road against Albertus Magnus College.

Fox says that team development will be crucial to the team’s success in the future.

“One of the keys for us moving forward is continuing to develop our team identity,” Fox said.  “So far we’ve shown that other teams aren’t able to skate with us when we’re moving our feet, so maintaining that energy and work ethic will be essential to keep building our confidence as the season progresses.”