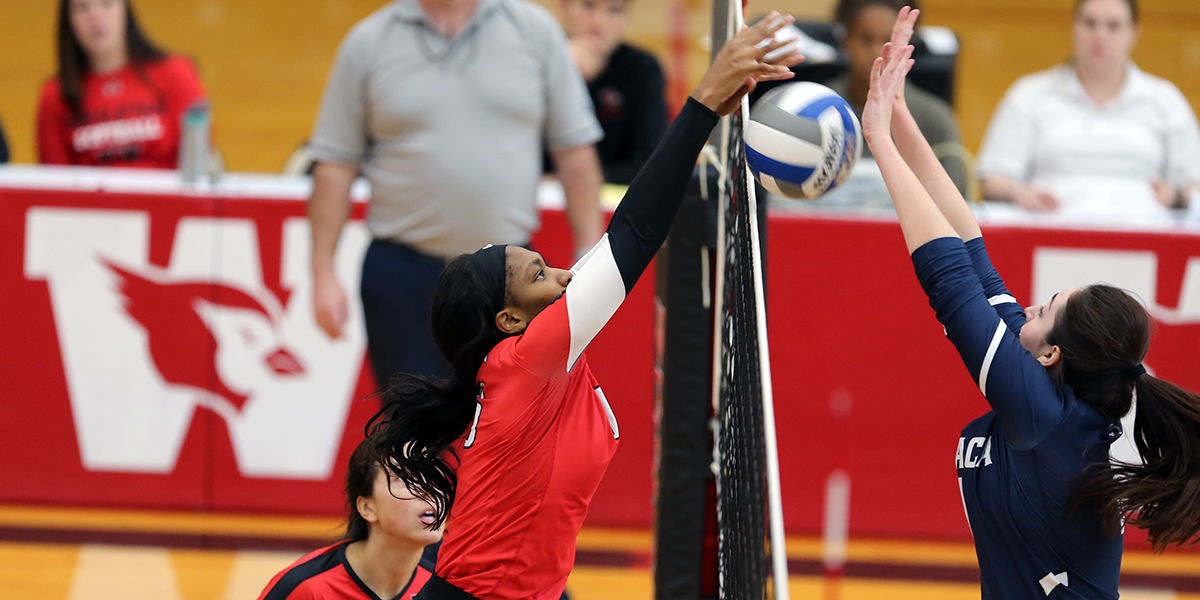 Volleyball’s historic season came to a premature end on Nov. 16, in a defeat against Ithaca College. No. 25-ranked Wesleyan was eliminated from NCAA contention in the second round of the Potsdam, N.Y. Regional division, by unranked Ithaca. After the Cardinals steamrolled through the regular season, had a strong showing in the NESCAC tournament, and handily defeated St. John Fisher College in the first round of the NCAA tournament, the Bombers seemed to be one of only a few teams that had Wesleyan’s number, having already defeated the Red and Black two weeks prior.

St. John Fisher, who entered the tournament as the representative of the Empire 8 Conference, didn’t present much of a challenge for the Red and Black. The first set showcased an efficient attack for Wesleyan, as the team posted a .500 hitting percentage with 17 kills. The Cardinals recorded the first four points of the set, and went on to win 25–14. Wesleyan took another early lead in the second, briefly fell behind 9–6, then powered ahead on the merits of a 7–1 run. They would seal the set away, 25–16. St. John Fisher put up its best fight of the day late, drawing close to the Cardinals at 24–20. With a kill by Gabby Bennett ’20, however, Wesleyan emerged victorious and completed the sweep. Senior Mia Hogan led in kills, and as has come to be expected, Muraoka-Robertson and All-American Phia Bellizzi ’21 paced the team in assists and digs, respectively.

The next day, the Red and Black took the court against Ithaca. The Bombers had already spoiled the Cardinals’ Senior Day matchup on Nov. 2. The teams stood neck-and-neck, with Ithaca leading 11–10, until a 9–1 run gave Wesleyan a permanent lead for the set. Although Ithaca cut the margin to two late, a Stasie Litinsky ’20 kill followed by a Bomber service error handed the Cardinals set one, 25–22. Ithaca bounced back with a strong showing, holding the lead for the entirety of the next set. Their momentum carried over into the third, allowing them to overcome an early Wesleyan lead to put the Cardinals at a 2–1 disadvantage. In the fourth, it was the Red and Black’s turn to respond, closing out the set 4–1 to force a rubber set. Unfortunately, it was Ithaca who prevailed in the fifth, knocking Wesleyan out of the volleyball Big Dance by a 15–9 margin. Although it wasn’t enough to help the Cardinals advance, a pair of first-years stepped up their game for the final match; Bella Ahearn led in kills with 13, while Chloe Mauceri topped the team in kill percentage (.304).

Despite the rough streak against Ithaca, the team insists that the Bomber’s success stemmed largely from good fortune rather than a strategic advantage.

“I am not sure Ithaca did anything we weren’t prepared for, but understanding what they are going to do and stopping what they are going to do are two different things,” head coach Ben Somera said in an email to The Argus. “We actually felt like we played really well for good stretches in both matches but they got their point scoring runs at better times in the sets and match.”

Bellizzi agreed with her coach’s assessment.

“There’s never been anything specific that Ithaca has done to throw our game off,” Bellizzi said in a message to The Argus. “The last two times we played them, we played well, really well. They’re a good team so the games are always really close. The difference though has been them getting on runs at the right times, which has been unfortunate for us.”

Looking forward, the team can continue to rely on their strong foundation and recruiting classes Somera has delivered to the program. However, the team faces significant challenges headed into the offseason; eight seniors, including All-American Nicole Hilton and All-Region athlete Kaira Muraoka-Robertson, will be departing the University come May.

While Ahearn has had a terrific year for the Red and Black, none of the other members of the classes of ’23 and ’22 have yet established themselves as heir apparents to Hilton, Muraoka-Robertson, or 2018 All-Region honoree Litinsky. However, the team is optimistic that its existing talent, given larger opportunity, will be able to fill the admittedly large shoes left by the class of ’20.

“We graduate a big senior class that has competed in a lot of matches and has distinguished themselves as the winningest class in program history,” Somera wrote. “These seniors have exceeded my expectations and there will be a lot of roles up for grabs this winter, spring and next fall but I am encouraged by what I have seen from our non-seniors.”

As one of only three juniors on the team, Bellizzi understands the impact the seniors have made, but is excited for the possibilities of her final year.

“I can say that the team is in a really good place for next year,” she said. “Yes, we’re losing a lot of seniors, but there’s also going to be a lot of new talent coming in. Also, the underclassmen right now have improved tremendously over the season, so I’m excited to see how they work in the off season going into next year.”

As she moves from a competitor to an alumnus, Hilton reflected on the season, her Wesleyan career, and what she expected from the program in the future.

“Although it ended earlier than we were hoping, overall it was a very successful season,” Hilton said. “For the first time in my four years in the program, we had a very large senior class which allowed us to have many leaders in the gym at all times. Our other returners and freshmen helped to create a very competitive environment and strong team culture. My class in particular has seen this program grow tremendously and we are excited to see what great things Wesleyan Volleyball does next.”

What does come next is a substantial test of Somera’s system and recruiting prowess. However, if the words of the team offer any indication, we shouldn’t expect anything less than another strong showing from the team next year.