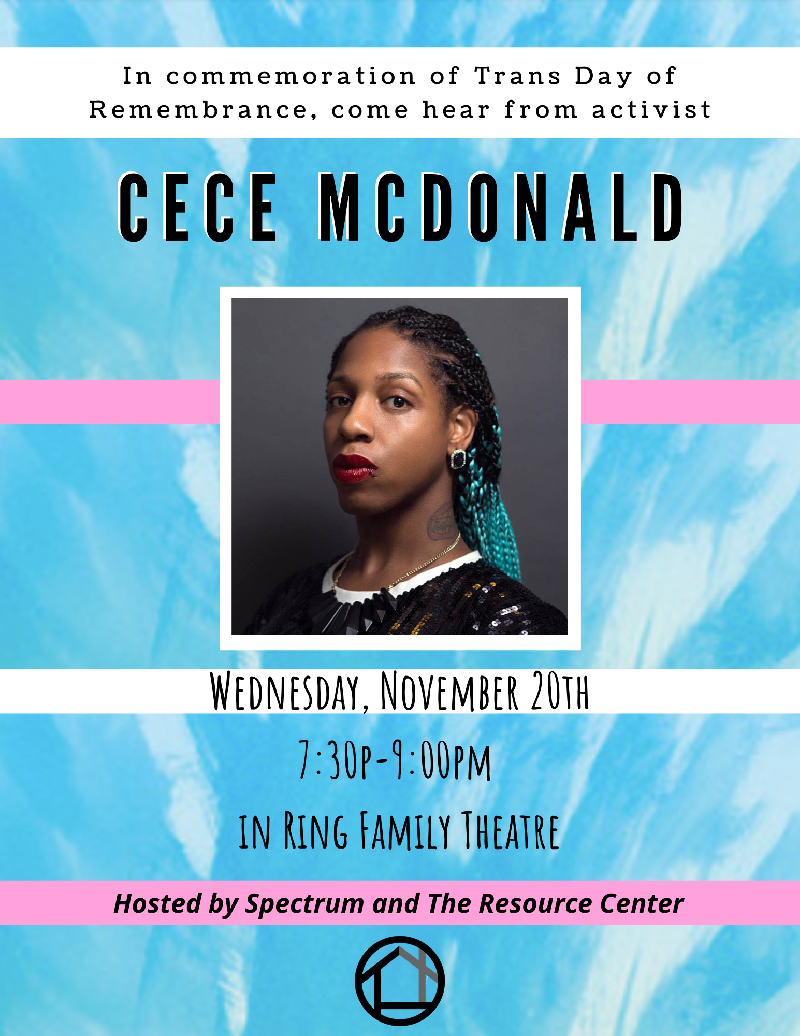 Trans rights and prison reform activist CeCe McDonald spoke in commemoration of Trans Day of Remembrance Wednesday, Nov. 20. The Resource Center and SPECTRUM—an organization that helps provide a safe space and a voice for queer students of color— collaborated to bring McDonald to campus.

The evening began with a word from Resource Center Director Demetrius Colvin about how Trans Day of Remembrance is not solely for trans individuals.

“It’s not just about bad things that happen to good people but rather we all have to deal with the violence in our community and our relationships in how we learn transphobia and keep passing down generation to generation,” Colvin said. “And that’s how we can really make systemic change. It is about how all our humanities are intertwined and unless we are all free, none of us are free.”

One of the co-chairs of SPECTRUM, CeCe Payne ’21, who introduced McDonald, explained that she is a transgender activist and an icon of the LGBTQ community. She captured international attention after surviving a white supremacist, transphobic attack, as well as a second-degree manslaughter conviction and 41 months in prison. She is known in the LGBTQ community as a hero for her story of survival and for the price she paid for fighting back.

“[McDonald] uses storytelling to articulate the personal and political implications of being both Black and trans,” Payne said. “With energy and conviction, she highlights the hope she now fights for: that LGBTQ people can live their lives free of hate and prejudice and confidently pursue their dreams without fear.”

McDonald began her speech by expressing that Trans Day of Remembrance for her was a celebration of the lives of trans women of color who have been murdered. She then asked the audience to take a moment of silence for these trans women. After the moment passed, McDonald stated how she felt shaken up on this day in particular, as she personally knows people who have been victims of violence. She reflected on her own experience with violence and how she could have been a person on that list.

“An act of defiance is a way for me to continue those names and those legacies of trans women that haven’t been able to have a place or have a platform,” McDonald said.

McDonald then discussed how the attack was a defining moment in her life because it was the first time she ever dealt with that level of violence. Even though, as she was growing up, she had to deal regularly with violence.

“Growing up being inherently feminine, woman, and badass, I dealt with a lot of violence, without a doubt,” McDonald said.

She detailed how she grew up in Chicago in a predominantly Black community, and when she attended college in Minneapolis, it was jarring for her because she had never been in a place that was so integrated. She grew to desire this type of integrated community, but sometimes co-existing became an issue.

She described the incident where a group of white people were outside of a bar drinking and used transphobic, homophobic, and racial slurs against McDonald and her friends.

“To be called a ‘nigger’ was new, and it was difficult to process the emotion that comes with that,” McDonald said.

The confrontation soon escalated into physical violence, as one member of the group hit McDonald with a glass, cutting her face. As McDonald was leaving the scene, one of the men followed her and McDonald killed him, claiming self-defense.

“You want to be the rational person, and in my mind, I’m like, ‘I’m sober, I can be the bigger person right now,’” McDonald said. “My thought process was totally different than the way that I was usually protecting myself and defending myself. Because now I feel the violence is at a different level. And [the] only time I had seen in the media where someone was called ‘nigger’ was before a lynching or a whipping or before something tragic happened, and that’s all I could think about at that moment. Like, ‘Oh my God these people are really going to try to kill me, kill us, or do something really bad to us.’ That fear always constantly setting in, you know.”

Even though her violence was in self-defense, she faced criticism.

“It happened in my own neighborhood and the majority of the masses who were tuned into the incident were more so concerned about the death of a neo-Nazi rather than a Black trans woman who was attacked for no reason and people in her community question her audacity to protect herself,” McDonald said.“…When I think of Trans Day of Remembrance, I think about how I could have been a name on that list. And I don’t think a lot of my sisters get a chance to think about the ways to protect themselves because of the situations they are put into, and how they have to think minute by minute, but sometimes it is too late.”

McDonald explained that being vocal is crucial to stopping the cycle of violence perpetuated against Black trans people.

McDonald then delved into a discussion of privilege.

“Other people get to navigate life pretty differently, and that can be upsetting at times, especially when people don’t acknowledge they way in which they hold those privileges, and they navigate life thinking that they are lucky,” McDonald said. “You are not ‘lucky.’ That just means you are part of the societal problem and that dives deeper in white supremacy and institutionalized racism.”

She then acknowledged her own privileges and implored the audience to do the same.

“Luckily, I’m even up here as a Black trans woman, holding a platform, being able to talk about these issues, because there are so many girls like me that don’t get to have a platform who went through the exact violence I went through and don’t get to have a voice and have a say,” McDonald said. “Even me, as a Black trans woman, I can get up here and acknowledge the way that I hold privilege in being up here.”

McDonald then noted it is not enough to be aware, but more so what one does with that privilege. She asked others to be critical of themselves and to think about how to use one’s privilege for the benefit of others.

“How are you interrogating your privilege?” McDonald said. “Asking aggressively to yourself, what am I, a cis person, doing to uplift the voices of trans, queer and non-conforming people? If you are non-POC, what are you doing to uplift POC voices? I think that people need to step back and understand where their privileges lie.”

She explained that ultimately, shifting the narrative requires a communal effort.

“Things that can help a person versus what we think that people need, that is what is important to me today on Trans Day of Remembrance,” McDonald said. “I am asking for people sincerely from my heart to think about the way in which we all as community and here at Wesleyan. I hope that when I leave here everything that I said sits in y’all, and you will decide to do something in some way—because it is so important.”

She concluded her lecture with a word on remembering those who have been killed.

After closing her speech, she opened up the floor for questions.

“In holding an identity that is historically silenced, you seem like the person who is the opposite. So what does that mean to you to not conform to that silence that is so pressed upon you?” Colvin asked.

“I will always fight for my sisters,” McDonald said. “I don’t want to come every year and we get to this time and everyone wants to sulk and be sad for this one day then be like for the rest of the year be like, ‘Fuck trans lives.’ Even if you are secretly saying trans lives matter, you have to show you a statement by actually doing the work. I’m not here for the kumbaya and holding hands…. That’s not how I see the world when I know that there are people actively trying to kill me.”

McDonald also told the audience that in order to protect people’s lives, her job is to be vocal and outspoken.

“My job is to make people feel uncomfortable,” McDonald said.

When asked about her healing journey after enduring so much violence, McDonald commented that she focuses on her humanity.

“That’s where the healing comes from. I realize that I am exactly where I am supposed to be: here, living, thriving,” McDonald said.

She also discussed how systemic healing is going to be a continuous practice for her.

“Systemically healing is always going to be a process,” McDonald said. “It is something that I’m gonna have to do everyday because there is going to be a wound reopening or a whole new one.”

Ashley Ogwang can be reached at aogwang@wesleyan.edu.