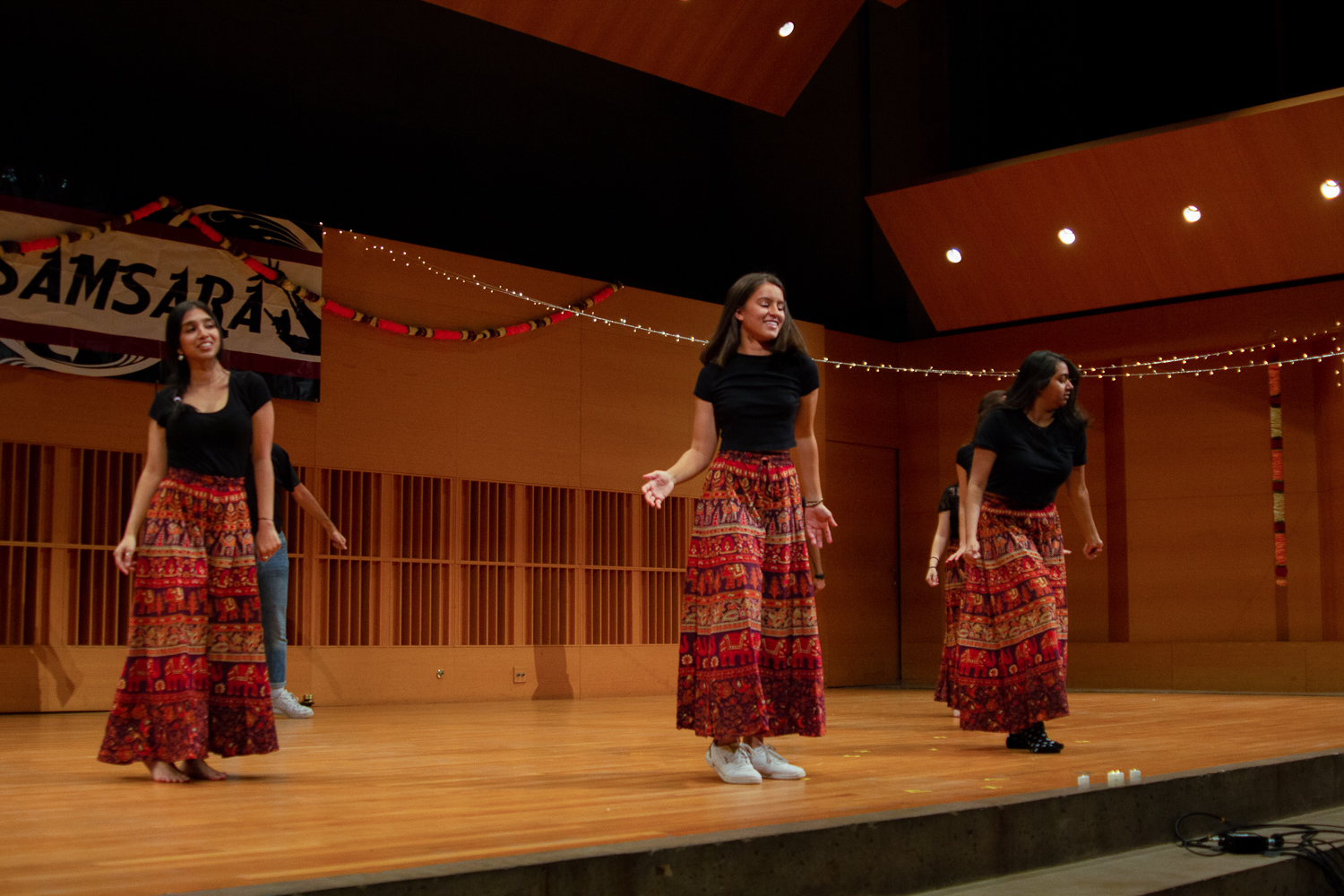 Samsara, which incorporates music, dancing, and acting, displays the breadth of both South Asian performance art forms and student talent on campus. The scope of the performance is what makes Samsara so impressive, but it also means that putting up the show poses a formidable logistical challenge.

“This year I’m president of Shakti, which means that even though I have no theatrical skills whatsoever, I was in charge of organizing and directing the show,” Saadia Naeem ’20 said. “It would not have been possible without all of my board members, or without the rest of Shakti. All I did was assemble everybody…. The biggest challenge this year was definitely personal for me. Everyone really came through and did their hardest work for the show, but I definitely felt sometimes limited by my own lack of theater or show-related knowledge. The challenge was in learning to trust myself and my decisions. I’m lucky to be surrounded by such a supportive group of people—everyone really pulled their own weight and put their fullest energy into their parts of the show.”

Each year, Samsara includes a lengthy skit which is written and performed by Shakti members and the scenes of which are interspersed between the standalone dance and musical performances. This skit forms the backbone of the show, and often directly relates to South Asian student life on campus. This year’s skit starred actual Wesleyan first-years Celine Rogers ’23 and Khushi Jain ’23 acting as a pair of fictional Wesleyan first-years, grappling with their unique cultural identities and their unspoken romantic tension. The skit was both funny—Iman Sigman ’20, playing the biracial fairy godmother of one of the protagonists, was a highlight—and topical, addressing the way in which, for many first generation Americans and people of color, it can be hard to find a place that truly feels like “home.”

“My favorite part of this Samsara was definitely our script,” Naeem said. “I’m not much of a dancer or singer, so while I absolutely love watching those performances, I wasn’t as intimately involved in their development. But with the script, I really got to work as part of a group where we were bouncing awesome ideas around. You start from nothing, from like barely an idea, because there really are no guidelines to what the show has to be…and I really loved seeing everyone get excited about their ideas and stitch them together and turn it into a full script with 11 scenes! I really have to give a big shoutout to Akash Bhide [’22], Sush Jay [’21], and Neha Srinivas [’20] for kicking off the whole script-writing process and giving the writers and rest of the group ideas to work off of. And of course, most of the kids acting have never really done much theater before either…. I love, love, love seeing them coalesce around the play and then put their all in. By the time the show came around, they were ad-libbing comfortably, and they had such amazing stage presence, I was honestly floored.”

While Shakti organizes a variety of community events, from student panels to film screenings, Samsara is one of the organization’s largest and most popular events, and thus one of the biggest opportunities for Shakti members to share their culture and perspective with the wider campus community.

“Samsara gives us a choice as to how to showcase what being South Asian means to us, and that’s important because we can fight stereotypes or bring to light issues that people wouldn’t normally think about,” said Tashfia Jilu ’22, who was one of the show’s emcees.

“Events like Samsara are so important not just for the group, but for the campus because it allows for us as members to share our culture to the broader community,” Jay said. “Sharing our traditions and practices is super important in having a better understanding of South Asian culture and what it means for it to exist on campus.”

While Samsara is a way for Shakti to contribute to the campus as a whole, it is an equally valuable experience for its participants, many of whom pointed out its crucial role in facilitating bonding within the organization.

“Samsara is meaningful to me because I get to spend time with and get to know people I normally wouldn’t have the chance, especially the upperclassmen,” Jilu said.

“My favorite part of being in Samsara is seeing the relationships that are formed during the process,” Jay added. “It’s so beautiful to see how cohesive the group becomes and Samsara is such a key role in facilitating our group dynamic.”