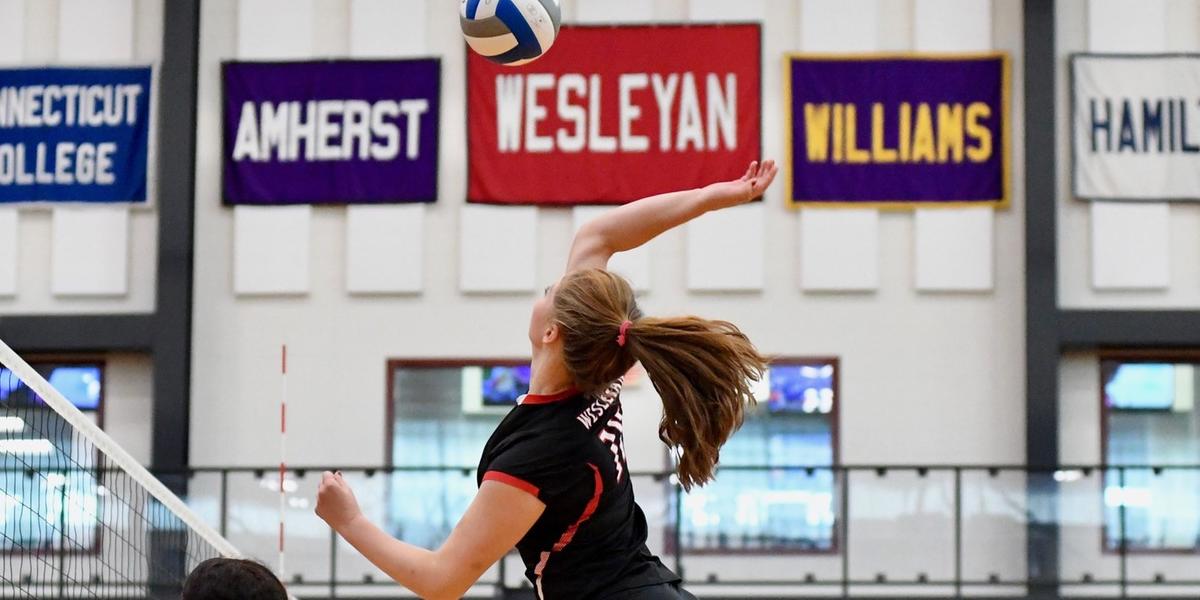 Despite a historic 19–3 season, volleyball has finished with mixed results in its last three matches. Coming off an 11-game undefeated stretch that included seven conference wins, the Cardinals lost their Senior Day matchup and regular season finale against Ithaca College. Moving into the NESCAC playoffs, Wesleyan easily handled Bates before surprisingly falling to Bowdoin in the semifinals. Despite the premature end to the season, the Red and Black are far from finished. On Friday, Nov. 15, they will compete in Potsdam, N.Y. for the opening round of the NCAA Tournament.

The beginning of Wesleyan’s Nov. 2 game was dedicated to the careers of the team’s eight seniors—seven competitors, one manager. The Class of 2020 finishes their time in Middletown having guided the volleyball program to its most successful stretch in history. With a 76–23 overall record (32–8 in conference), the class brought home an Elite Eight Berth, a NESCAC championship, and a Little Three three-peat in the past four years.

Of course, no one told Ithaca that they weren’t supposed to ruin the festivities. Wesleyan jumped out to a two-set lead, then dropped three straight as the Bombers mounted a furious comeback. By a margin of 3–2, Ithaca spoiled what could have been a perfect end to the regular season.

It hasn’t been all bad news for Wesleyan’s seniors, however. Both Nicole Hilton and Kaira Muraoka-Robertson were named to the First and Second All-NESCAC teams, respectively. Junior Phia Bellizzi joins Hilton on the first team, and was also named 2019 NESCAC Defensive Player of the Year. Bellizzi led the conference in digs per set and became Wesleyan’s second-ever athlete to win the award. First-year Bella Ahearn was also able to secure some hardware, being named NESCAC Rookie of the Year.

A short while after their Senior Day defeat, the second-seeded Cardinals were on the bus to Medford, Mass. to begin their NESCAC tournament run. The opponent was seventh-seeded Bates, who Wesleyan had already beaten back in early October. In the first set, the Red and Black made the most of every opportunity, beating down the Bobcats with an efficient .643 hitting percentage. After trailing early, the Cardinals pulled ahead and finished out the set 25–8. Trailing early again in the second set, Wesleyan jumped off on a 6–0 run and never again trailed, winning 25–17. The third and final set was the most competitive; Bates led for the majority of the set, but wasn’t able to seal the deal against a gritty Wesleyan team that managed to grind out a 25–22 victory.

Head coach Ben Somera credited the victory to his team’s steadiness and resilience throughout the match.

“Our offensive rhythm was good in both serve, receive, and transition on Friday,” Somera said. “The team looked poised throughout the match regardless of the score.”

The next day, Wesleyan took the court against third-seeded Bowdoin, who had just come off a sweep of their own against Williams. The two teams had seen a lot of each other this year; they faced off twice in September, with Wesleyan sweeping both matchups. This time around, however, the defending NESCAC champion Polar Bears came prepared to play. Knotted 9–9 in the first, Bowdoin employed 4–0 and 6–0 runs to steal the set 25–17. The second set saw Wesleyan dominate the beginning, falter in the middle, then pull together in the end by way of a 10–1 run to win 25–19. The third set was contentious, with the two trading one-point leads in the end stages.

The set was ultimately settled with consecutive kills from Ahearn and Hilton, granting Wesleyan a 28–26 win, a 2–1 lead, and a chance to move on to the championship round. Needing just one more victory, however, the Cardinals proceeded to fade away at the end of the fourth, letting Bowdoin win 25–22, then never led in the match-clinching fifth set, as Bowdoin advanced 16–14.

Somera commented on the strategic adjustments the Polar Bears have made since September, noting that they set Bowdoin up for a better offensive performance against his own squad.

“I think the biggest difference from our early season match was that they were only using a back row setter and were able to spread their offense out a lot more,” Somera said. “We scored a lot of points in the earlier matches when their setter was in the front row and they only had two other hitters. Having three hitters attacking limits what we can do with blocking schemes and puts a lot more pressure on our floor defense. We dug a lot of balls but we only had one attacking option a lot of the time.”

Bowdoin would go on to lose in the championship round to first-seeded Tufts. The Jumbos were responsible for Wesleyan’s only conference loss this regular season.

Despite failing to earn the automatic qualifier from winning the conference, Wesleyan was nonetheless selected for an at-large bid to the NCAA tournament. Despite the tough loss, Wesleyan never wavered in their belief that they would have a chance to top their Elite Eight showing from last year.

“I felt pretty confident that we would receive an at-large bid to the tournament,” Somera said. “We were ranked third in the New England Region and the one and two seeds received automatic bids by winning their conference tournaments.”

Wesleyan will face St. John Fisher College of Rochester, N.Y., in what will be the first-ever meeting between the two schools. Perhaps it was meant to be, however; both schools employ the cardinal as their mascot. Due to his relative unfamiliarity with the program, Somera intends to hit the film room before the match today at 12:30.

“At this point, I don’t know a whole lot about [St. John Fisher],” Somera said on Monday. “The NCAA has a videotape exchange, and we will download their video and take a look at them later this week.”