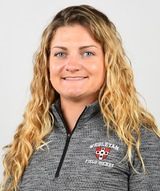 Wesleyan field hockey finished its fall season earlier this month with a loss against Conn. College, dropping them to a 5-10 record overall and a 1-10 conference record. Despite this difficult record, the Cardinals conclude their fall run with much improvement and success, battling through the season with a slew of hard-fought games decided by a solitary goal. During the 2019 campaign, the team picked up a win against Tufts, the fifth-ranked team in the nation, and notched their best overall record since 2013.

The team’s recent success is no doubt motivated by the Cardinals’ new coach, Christine Kemp. Coach Kemp came to the helm of Red and Black field hockey earlier this year in July, and has already taken the team to new heights. The Argus sat down with Coach Kemp to talk her field hockey history, the NESCAC, and firing up competitive energy.

The Argus: What drew you to Wesleyan? Why did you decide to come here?

Christine Kemp: I’m really competitive. I was doing some research on the recent success here, like men’s and women’s lacrosse and women’s tennis. It really showed me that this was a place where you can win. Being able to compete in the NESCAC, which is the best conference in Division III with all the best teams, is really exciting. If you want to be the best, you have to compete and play with the best. Those were definite things that drew me here.

Otherwise, it’s really similar to the school I went to, Skidmore College, you know, small liberal arts school, competitive field hockey programs. I saw a lot of similarities and felt like it was a place where I would feel at home.

A: Does Skidmore have the same balance between academics and athletics that Wesleyan has?

CK: The NESCAC is really unique. I’d say that nobody has that similar balance besides the NESCAC. But it’s a very aware thing. For example, the NESCAC doesn’t allow us to have a non-traditional season, which would be, for us, in the spring time. Skidmore does. Those restrictions are different for sure. The number of games you can have in a season is limited by the NESCAC, but not for Skidmore and schools like that. There’s an awareness that this is an academic school and this is why people are here.

A: How have you adjusted to those differences, coming from coaching at a non-NESCAC school like Castleton University?

CK: It really hasn’t been that difficult of an adjustment. To be honest, I like having less games because I feel like you can spend more time preparing for each of those games. Everyone here at Wesleyan wants to be successful and they want the people around them to be successful. I think that’s really cool and it’s been awesome to see the girls on the team inspire and motivate each other in all aspects. They support each other in everything they do. Ask me this again in March when I want to be practicing with the team and I might say something different, but so far, the adjustment’s been good.

A: Going into the season, what were your goals and plans?

CK: The goals were to really just build a solid foundation for upward growth of the program. I can confidently say that we did that. We improved so much individually but also as a unit. I just wanted to teach people something new: new strategies, new styles, things like that. I think we accomplished that and I think it was a necessary step to build upon for years to come. Of course you want to win more games, but one step at a time. Rome wasn’t built in a day. It was an exciting start.

A: Even with a lot of those games, they were only lost by one goal, which is heartbreaking to see.

A: What was your proudest moment this season?

CK: It has to be the Tufts game. What I was mostly proud of was the fact that we believed. [We’re] a team that lost 8-0 last year, and Tufts is a team that played in the NESCAC Championship and the National Championship games. To actually believe that you could win that, and go out there and play like that is something I was really proud of. It was really telling that what we were doing here was paying off and working. Everyone here was on board. During the game it was really intense…. Maybe this group in particular hasn’t won a game of that magnitude, and so to remain so composed…I was really proud of the girls for that.

A: Is that mindset something you had been working for during the season?

CK: I think it comes with preparation. The more prepared you are, the less frantic you’re going to feel and the more confident and composed you’re going to play. It wasn’t necessarily a focal point, but sort of a result of all the other things we were focusing on. I think it showed us that when we’re composed, we do really well. It became a theme after that, to have that composure.

A: If the Tufts game was a high moment, what were some of the lows and difficulties this season?

CK: I think losing those games—I think we lost six games by one goal—games that we really felt that we could have won is really challenging to come back from and be resilient after. [Resilient] is a word we talked about a lot. I think it’s human nature for that to kind of wear on you a bit. I wish a couple of those games had gone our way to kind of keep that same confidence that we had after Tufts, but it’s all growing pains.

A: Is there anything you’d do after those games in practice to rally and get ready for the next game?

CK: Toward the end of the season, we had a week of practice before all our games, which was nice. One week we made a competition week. I split them into teams. Throughout the whole week, [for] certain drills that we did they could earn certain points for their teams and compete. The group at the end would get a prize. I think that helped keep the competitive energy for sure. It made people remember that we’re still fighting for something and we still wanted to work really hard.

A: Are there any other new drills like that that you think worked well this season?

CK: One of our things was scoring. We need to be hungry to score. I do this drill where there’s a goal cage in the regular spot and there’s another goal cage at the top of the circle. It’s five on five on the inside. We call it “No Rules” because there’s basically no rules, it’s just like, “Can you score?” The team gets pretty fired up about it and they really like it. It’s a pretty wild game. If [the ball] hits your foot, we just play. You just go for it.

A: How do you plan to prepare for next season, especially as there are seven graduating seniors?

CK: The off-season is such an important part of the preparation and of the actual season. Putting an emphasis on the commitment that it takes to really put yourself in a good position to be successful is paramount in building this program up. I think the girls are really ready to do that and ready to commit and excited to commit. They got a taste of what it feels like. They want to beat Tufts every year and beat a lot of teams.

We are really young. We are graduating seven leaders but our sophomore class is really huge and a big portion of the team. I think that puts them in a leadership role that will really pay off in years to come.