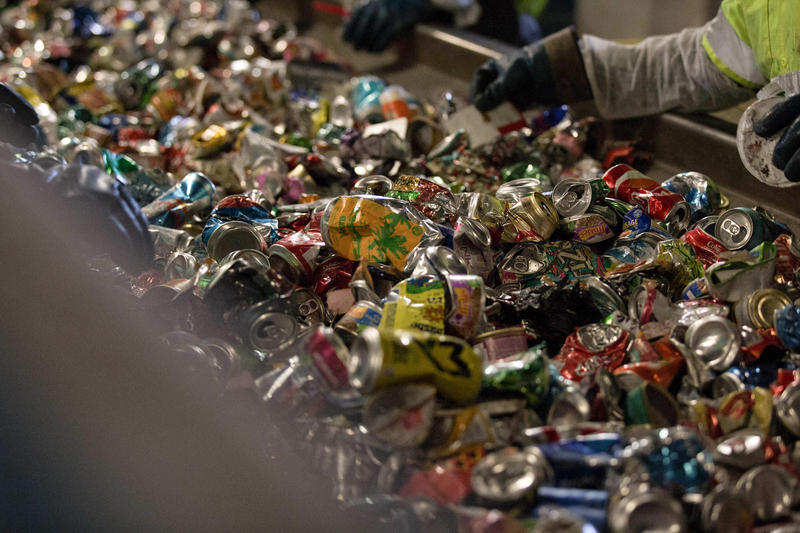 Recycling—a common practice on campus, in Connecticut, and globally—is known for its environmental and sustainable benefits. But in last couple years, it has also become unsustainably expensive, with the recent crash in recycling markets.

“When we purchased them in 2013, the price of cardboard—like the price of any material, it’s a commodity, it changes over time—we were seeing $80, $90 per ton in terms of the amount that we would get,” Sustainability Directory Jen Kleindienst said. “The highest that we saw, we got $140 per ton. With the crash of recycling markets, even though it is a clean material, I don’t think we’ve seen it go over $10 per ton in the past six months.”

This is a small example of the wider problem.

“It’s not a Middletown problem or a Connecticut problem, it’s a U.S. problem,” Kleindienst said.

These changes are due to two main factors. The first is the national emphasis on switching to single-stream recycling. This model, in which all recycled objects go into the same bin, has ultimately caused an increase in contamination. The second problem comes in tandem with the first: China’s decision in 2017 to severely restrict import of recyclables into the country. Ultimately it is a self-feeding system that causes larger-scale economic shifts to impact local communities, and vice versa. The University, Middletown, and recycling plants in the area are struggling to keep up.

But on campus, recycling seems streamlined, at first glance. When a student throws something into a recycling bin, a custodian will eventually empty that bin and bring the recyclables to a larger bin, located in a central campus location such as Usdan or Exley. There, custodians are asked to empty bags filled with recyclables into one of the large containers. Once the recyclables are in the containers, a hauler will come to pick up the recycling.

Some parts of the University—including HiRise and LoRise apartments, senior houses, and some other campus locations—are included in Middletown’s Sanitation District, and the waste and recycling for these locations is managed by the city. But because of the sheer amount of waste that the University produces, the municipal waste service offered by the City of Middletown is unable to collect for the entire campus. The University, to make up for this, contracts a private waste collection service.

Up until September of this year, that service was Dainty Rubbish—a family-owned waste management business, perhaps most recognized by their powder-blue garbage trucks with the phrase “Garbage is Beautiful” emblazoned on the rear. According to Kleindienst and Associate Director of Facilities Management Jeff Sweet, Dainty Rubbish was recently bought out by the larger waste-management group AllWaste. AllWaste is now responsible for the removal of garbage and most forms of recycling on campus, which is then taken to processing plants. There, the recycling is sorted by type of material. It is crushed and compacted, and then, if all goes well, it is sold on the recycling market.

Of course, this only works for non-contaminated loads, free of non-recyclable materials such as food waste or regular garbage. Contaminates are removed in two different ways. Most commonly, contaminated items are removed at the recycling plant. This is often done by workers, who sort loads of recycling manually as items move on a conveyor belt. Machines, too, will sort recycling into various categories, including even different types of plastics.

“Everything that the trucks [bring] basically just [gets dumped] into a giant room, so there are just mounds of recycling, with plenty of trash mixed into that recycling,” Kleindienst explained. “Things in groups get whisked up onto conveyor belts. They actually go down a conveyor belt. There are people standing on the sides of the conveyor belt physically pulling off items that don’t belong in any of the recycling streams.”

The second way a load can be determined contaminated is prior to arrival at the plant. This is at the discretion of the company collecting the load—in the University’s case, either AllWaste or the municipal collectors. If a collection company determines that a load contains more than a certain percentage of garbage, the load will be determined contaminated and everything in it will be sent to a garbage dump. Keith Santos, the point of contact for AllWaste for Wesleyan University, confirmed that their litmus is about 10 percent, as stipulated by Connecticut state law.

Sweet described the impact on the University when a load is contaminated.

“That decision is made in the field,” Sweet said. “It’s simple as, that tonnage gets recorded on our waste, and not on our recycling.”

The actual 10 percent litmus test is more of a guideline, primarily because the determination of whether loads are contaminated is purely visual. Contamination can sometimes be a proxy for plastic bags more than anything else, Kleindienst explained, and some of the subtler ways a load is contaminated often goes unnoticed. Santos also confirmed that AllWaste looks for 10 percent contamination but cannot determine exact percentages.

Additionally, percentages at which a load is considered contaminated can vary. A representative of the Materials Innovation and Recycling Authority (MIRA), which is based near Hartford, explained that their typical litmus for contamination is 5 percent.

Contamination of full loads is perhaps rarer than one would think. Kleindienst said that in each year, only about one or two loads from the University are diverted to waste. Sweet also mentioned that ever since the University has moved to empty recycling into the containers rather than dump it in with plastic bags, contamination has gone down.

“I would say residentially…I think our contamination level is under 5 percent,” O’Rourke said. “When people have dumpsters, that’s when it shoots up. Because when they see a dumpster, they feel like they can throw anything in it.”

According to data provided by O’Rourke, of the tonnage of recycling collected from July through September 2019—which amounted to 180 tons—13.73 tons were determined contaminated. These contaminated loads required that Middletown pay additional charges for recycling totaling $841.37, in addition to the $12,492.80 for the cost of recycling in the city over that time period.

Of course, most loads of recycling have some amount of contamination. This often takes the form of unclean recyclables, or other bits of trash that end up in recycling due to a phenomenon known as “wishful recycling.” Both Kleindienst and O’Rourke mentioned the phenomenon, explaining that people place items that cannot be recycled in the recycling bin because they think they ought to be recyclable. In the University’s case, this often takes the form of cups from Pi Cafe (most of which are compostable, not recyclable).

“People are putting things in their recycling that shouldn’t be there, because they wish that they could go there,” Kleindienst said.

O’Rourke also went into detail about the effects of wishful recycling, noting that ultimately, this does more harm than good.

“People wish, ‘It should be [recyclable],’ so they put it in the cart, but actually that’s a really bad thing to do,” O’Rourke said. “Because that’s one of the problems that we had in marketing our recyclables, and [by] we, I mean as a country. It wasn’t clean. There was so much junk going in there.”

Santos, in an email to The Argus, noted how difficult it is to meet China’s new regulations, speaking from the perspective of AllWaste.

“While everyone would love ZERO contamination, it’s just not practical,” he wrote. “It’s a % by volume not weight which is <10% by CT State law, whereas China has fully banned mixed recyclables and allows only 1 [pound] of contamination on a 2,000 [pound] Bale of material, an impossible feat to achieve (.05%) so they’ve basically closed their borders for recycled material from the US (down 99%) reduction from prior year 2018.”

This decision has had a significant effect on the current recycling economy. The United States isn’t currently equipped to face the demand that recycling takes. For the University, Middletown, and their recycling plants, China’s decision has had tangible economic effects. MIRA Operations Manager Virginia Raymond noted the decline in the recycling market, attributing it both to China and to the turn to single-stream recycling.

“The prices for pretty much all recyclables across the board have declined significantly,” Raymond said. “Certain materials are marginal at best, if not total losers. I would say from my perspective—and again I’m not necessarily speaking for MIRA—yes, prices have fallen. No question about that, even for what has historically been the most profitable.”

O’Rourke spoke to the specific economic effect on Middletown.

“It is affecting us because we used to get paid for the materials, now we are paying for it,” she said. “And Middletown’s a funny town because we have a downtown area where Wesleyan is, there’s an area, which Wesleyan is within, called the Sanitation District, and that serves our city. You know, we collect the trash, we collect the recycling, and that’s in the budget. So we now have to budget for the recyclables where we didn’t before.”

These changes have also had effects on the likelihood of recycling. Kleindienst said China’s decision has destabilized the recycling economy, making it difficult to tell how much is actually recycled.

“With the global crash of recycling markets, a lot of things have decreased substantially in value, and so there is currently no guarantee that most things that you recycle will get recycled,” Kleindienst said. “I have no way of knowing what is or isn’t actually being recycled right now.”

The other major recent impact on recycling processes has been the national shift to single-stream recycling, which itself is interwoven in why China decided to restrict recycling imports. This form of recycling, when recyclables are not sorted at home, has caused an increase in contamination.

“I think one of the things that has hurt recycling is single-stream,” Raymond explained. “It has increased the amount of contamination that we see in the recyclables. I think that, as much as anything, is a real component of why the prices aren’t as high as we used to be.”

Kleindienst also spoke to this problem.

“Single-stream recycling…is probably the worst idea we’ve ever had,” she said. “Conceptually, sounds great. But practically, if you decide that you think your coffee cup here is recyclable, and there’s still coffee in it, and you put it in…things get damaged, and they lose value. So that’s one of the reasons that I understand why a lot of recyclers in China, especially, have said, ‘We’re not taking American recycling, because it’s essentially garbage. It’s not clean, it’s not well-sorted. We can find our own materials domestically.’”

Ultimately, the shifting dynamics in recycling markets internationally necessitates an infrastructure change in the United States.

“The problem is now everybody is trying to market the materials domestically, and there’s only so many places to go,” O’Rourke said.

Kleindienst and O’Rourke argue that change also needs to take place on an individual level.

“One of the things that has come out of this is all of us, all of the municipalities are trying to educate people on what goes in the bin,” O’Rourke said. “Really, what goes in the bin. So we are really spending a lot on time on that, trying to get the word out: ‘Please pay attention to what you’re doing.’”