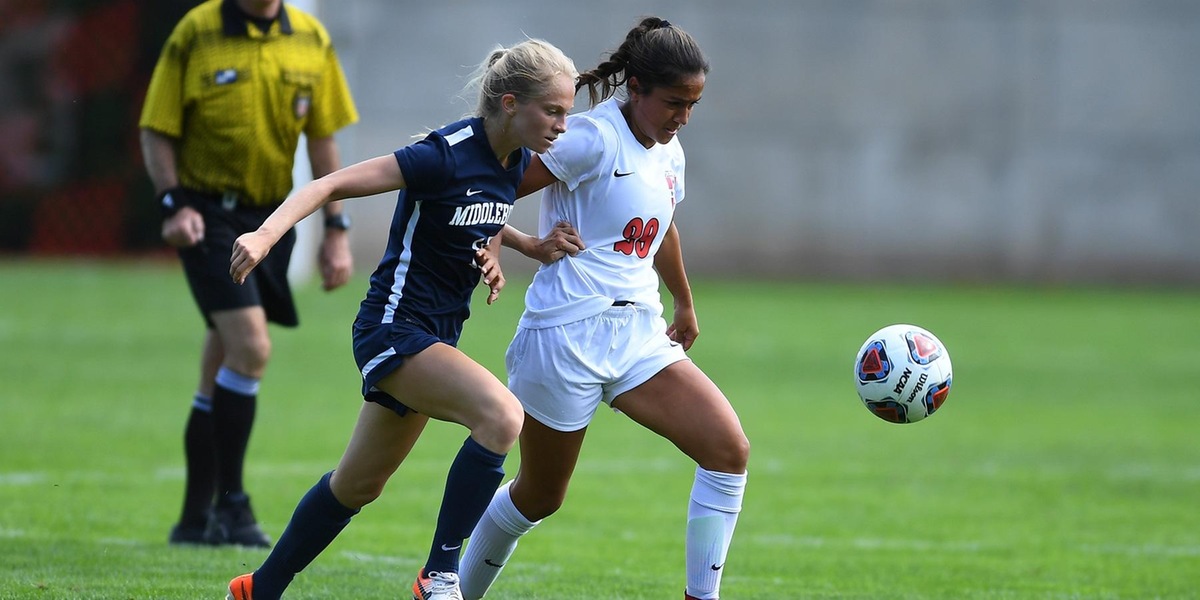 The NESCAC season for the women’s soccer team came to a disappointing end last week. They dropped their last two conference games, finishing out their conference matchup run with a three-game losing streak that included a tight quarterfinal loss to Middlebury on the road.

Before facing the Panthers, the Cards first wrapped up their regular season with a loss to Conn. College by a score of 2–0. The game was tight throughout the first half as the Camels scored to take a 1–0 lead off of a corner just over 12 minutes into the game. The lead stayed that way into halftime as neither team could find a way to score.

The Camels then added a second goal just under three minutes into the second half. Now down 2–0, the Cards worked valiantly to get on the scoreboard; they outshot the Camels 13–3 in the half but unfortunately could not find a way to put the ball in the net.

Despite not scoring throughout the game, the Cards dominated the Camels offensively, outshooting them 21–10. Katie Stewart Frizzell ’20 led the team with four shots on goal.

On defense, goalie Sarah Hammond ’22 made six saves in the losing effort.

Despite ending the regular season with a loss, the Cards finished with a 9–4–2 record overall, which is their best record since 2011 and good enough to get them the seventh seed in the NESCAC Tournament.

As the seventh seed, the Red and Black traveled to Middlebury to take on the second-seeded Panthers. Despite a strong effort, the Cards could not pull off the upset, losing by a score of 2–1.

At Middlebury, the Cards once again fell behind early, this time for the third straight game, as the Panthers scored just over four minutes into the first half. The score remained 1–0 until just over 30 minutes remained in regulation, when Dani Milovanov ’23 scored to tie the game up at one with pass from Julia Meehan ’20. Unfortunately for the Cards, Middlebury responded only 15 minutes later with a goal that put them in front for good and ended the Cards’ NESCAC tournament hopes.

The game was tight on the stat sheet. Middlebury only outshot the Cards 11–10. The Red and Black’s offensive effort came from multiple players, as four members tied for the team led with two shots each. On the defensive side of the ball, Hammond made two saves.

Despite the tough end to the NESCAC season, both Andi Wiley ’22 and Grace Devanny ’23 were happy with the team’s performance, especially in the quarterfinal against Middlebury.

“After our loss against Trinity, we were up against a lot of pressure to perform well in our final regular-season conference game versus Conn; however the weather conditions were not ideal and thus, we had a tough time playing our technical game in response to Conn’s style,” Wiley said in a message to The Argus. “Still, we came out confident against Middlebury for our first tournament game and produced a great performance, but were unable to get the results, unfortunately, letting in a last-minute goal towards the end of the second half.”

Devanny agreed with Wiley, adding that the team’s effort was organized and composed.

“We had a certain drive and will to win that was not present throughout the end of the season games,” Devanny said. “It was great to get back on our feet and finish the NESCAC season on such a competitive level.”

Despite the loss, the Cards still have a shot to make the NCAA tournament. They will find out if they get a bid on Monday once the conference tournament has been completed.

If they get the bid, both Devanny and Wiley agree that the team must work on defending set pieces and corners as three of the last four goals given up were off of corner kicks.

“As a team, we are really trying to perfect our organization and confidence in this area so we do not let up any more goals through these types of plays,” Devanny said.

Although they’ve faced a tough end to the NESCAC schedule, both players are happy with how the season has gone and are eagerly waiting to find out if it continues.

“We have had a very successful season, breaking multiple school records,” Wiley said. “Unfortunately, the end of our regular season is a poor reflection of our season as a whole. But, hopefully, we will have another chance to prove ourselves in the NCAA tournament if we get a bid.”