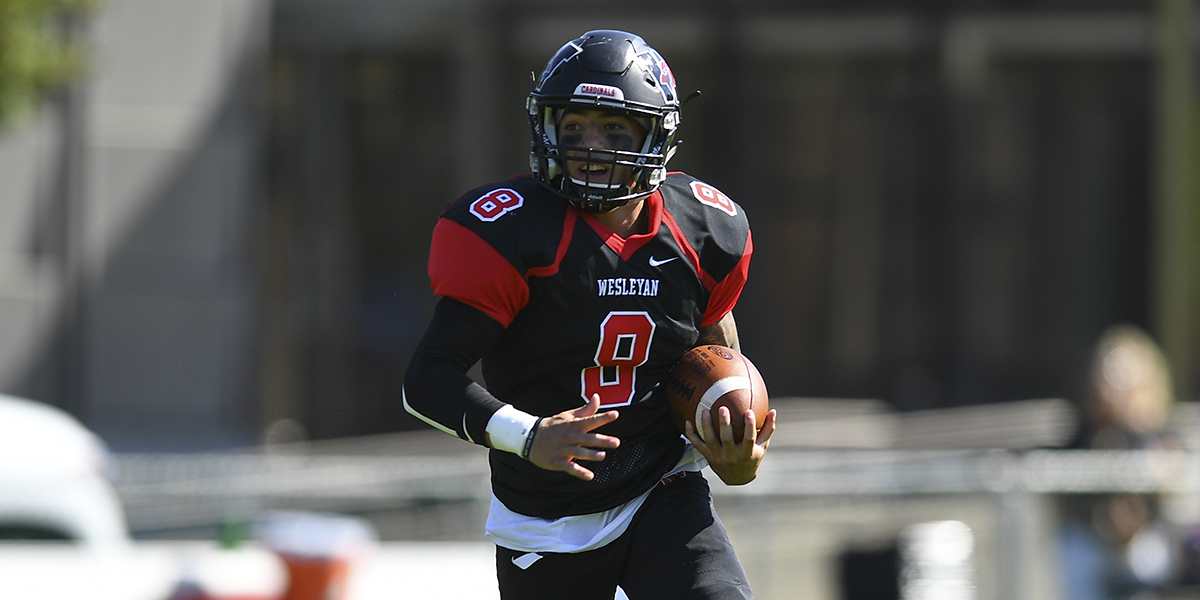 After a difficult loss to Middlebury last week, Wesleyan has returned to victory with a double overtime win over Amherst, 31–28. The Cardinals nabbed the awards for both Offensive and Defensive NESCAC Player of the Week, as wide receiver Matt Simco ’22 (two touchdowns and five catches for almost 150 yards) and defensive back Danny Banks ’22 (two interceptions as well as three tackles) each put in extraordinary performances.

Though not an exceptional performance, the offensive side of the ball played well and didn’t let up until the final minute. Thanks to Amherst’s strong rushing defense, the ground game did not contribute as much as during other matches of the season, but still put up a respectable 150 yards on the day.

Glenn Smith ’21 was the leading rusher with 80 yards, accounting for more than half the team’s total, but both David Estevez ’22 and Charlie McPhee ’22 contributed 22 yards, with Estevez also rushing in for a touchdown during the second quarter. The sophomore also played a large part in the aerial attack against Amherst, gaining over 50 yards and a touchdown.

But the stars of the show were quarterback Ashton Scott ’22 and Simco. Scott threw for over 280 yards and three touchdowns, with a completion percentage of 60 percent, while Simco played exceptionally well, with his highlight obviously being the 62-yard touchdown catch in the fourth quarter that took the game into overtime.

The Wesleyan offense dominated in time of possession, with almost 58 minutes to Amherst’s half an hour. This is especially impressive as Amherst’s defense is the most dangerous defense in the conference when it comes to takeaways. They lead with 20 on the season, but the Wesleyan offense did not give up the ball the entire game.

However, the Red and Black offensive effort was not perfect. The Red and Black struggled to consistently maintain drives, as they only converted 6 of their 17 third down conversions during the game and were forced to punt six times throughout the match.

Though it has devastated weaker teams in the conference, the Cardinal defense adopts a more bend-don’t-break attitude when playing against teams of Amherst’s caliber. This was on perfect display last weekend; the Mammoths put almost 400 yards of offense on the day but fell behind in time of possession and still lost the game. The Red and Black utterly stifled Amherst’s passing attack, holding them to only 160 yards during the match, and kept their star receiver James O’Regan to only 20 yards. They did not have the same success with the rushing attack, but Amherst is one of the best in the NESCAC on the ground, and only so much can be done when a team rushes over 40 times during a match. Banks now leads the NESCAC with four interceptions as part of the most dangerous passing defense in the league, with 14 interceptions on the season and the third-lowest amount of passing yards allowed.

Sam Kirk ’20 also had an interception during the game, taking his season total to two, and Babila Fomuteh ’21 had Wesleyan’s only sack on the day. Wesleyan still boasts the most sacks as a team (19) and Nick Livingston ’21 still leads the NESCAC in sacks. Though these individuals shone, the Red and Black defense’s group effort brought home the victory, as they did not allow a single point in the final quarter of the game or in either of the two overtimes.

Once again, the Cardinals were able to maintain their composure throughout the game, only giving up three penalties for 16 yards compared to Amherst, who committed six fouls for 40 yards. Special teams were slightly more inconsistent this week, with Mason von Jess ’23 making all four extra points but also missing two of his three field goal attempts. Von Jess nailed his last kick, making the game-winning field goal in double-overtime. Sam Han ’20 played well, with six punts going for over 200 yards for no touchbacks and three landing inside the 20-yard line, which is impressive.

Despite the difficulties of playing against Middlebury and Amherst, the Cardinals have proven themselves to be in the elite class of the NESCAC this year, but the season is far from over.

On Saturday, Wesleyan faces Williams for homecoming weekend. This will be another tough match, as they also have a 6-1 record, with their only loss being to Middlebury. They boast a potent offense that is not too reliant on either the ground or air attack, with two of the five leading rushers in the league and the most prolific receiver in the NESCAC. They can also lay claim to an elite defense, with less than 10 points allowed per game. It is clear that this will be a difficult match for both sides, but hopefully it will be an entertaining matchup for the families visiting this weekend.