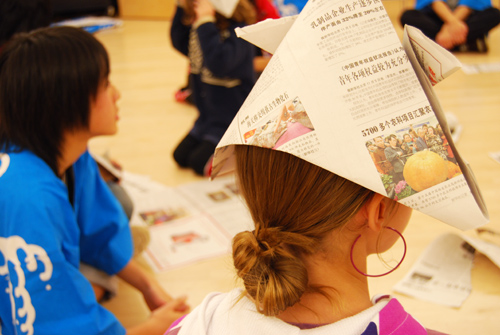 The East Asian Outreach program, which shares East Asian culture with elementary and middle school students in Connecticut, will begin this year’s volunteer sessions Nov. 22. The program, housed under the College of East Asian Studies (CEAS), brings students to campus to engage in hands-on cultural activities with Wesleyan volunteers.

Though the program has been established at Wesleyan for over seven years, this is the first year that it will be fully student-run. Previously, students were only responsible for the volunteer sessions, but now they will reach out to schools and coordinate sessions with students.

Candice Jiahui Shi ’21 and Sandy Kanjanakuha ’21, who have both been involved with the Outreach program since their first years, spoke about the mission of the Outreach program. Shi, who calls both Vancouver and Beijing home, explained that the program is intended for Wesleyan students to show young students in Connecticut what East Asian culture is.

“The main goal of this program is to have Wesleyan students, be it CEAS majors, minors, or just people of East Asian heritage, reach out to our local community, which is basically Connecticut, and share our culture,” Shi said.

Kanjanakuha, who is from Thailand, agreed, and added that the program also aims to help foster a more globalized perspective of the world for the children the program works with.

“It’s to bridge between the local Middletown community and the Wesleyan community, and a lot of times these Middletown students have never left the U.S.,” Kanjanakuha said. “East Asian culture might be something that’s completely foreign to them, because we’ve had students come up to us and be like, ‘oh, what is sushi?’ even though there’s a Japanese restaurant down the street.”

The Outreach program has the strongest ties to schools in Hartford and Glastonbury, but also works with schools in Middletown. Kanjanakuha emphasized that the program allows students at those schools to learn about cultures they normally wouldn’t discuss in class.

“It’s true that it helps College of East Asian students, and the people who are interested, play a part in giving back to the local community,” Kanjanakuha said. “But I also think an important aspect of it is to cultivate a more holistic perspective for the kids of the other side of the world because I think it will affect them, it will help them grow and develop into more oriented citizens.”

In addition to relaying cultural knowledge to Connecticut students, the Outreach program also offers Wesleyan students a chance to directly engage with East Asian culture. Shi decided to join the program during her first year because of her desire to become involved on campus by sharing her own culture with others.

“I thought it would be a worthwhile club for me to invest my time in,” Shi said. “I guess there’s not very prominent or strong East Asian communities in Middletown…so I think it was just a good way for me to share my culture and participate as well on campus.”

For Kanjanakuha, the program offered her a way to continue working with children while spreading awareness of Asian culture.

“I’ve always liked kids,” said Kanjanakuha. “I did a lot of work with kids in high school, and I wanted to continue it here at Wesleyan, because I find it very refreshing to work with kids, and to kind of feel like I’m actually contributing to their lives, even though it is as little as introducing them to what sushi is.”

The Outreach program will be hosting an event this Saturday, Nov. 2 during Homecoming/Family Weekend following the 2 p.m. tour of the Japanese Garden at the College of East Asian Studies. Shi and Kanjanakuha hope that anyone interested will be able to partake in the cultural activities that will be available and, if interested, volunteer to help out with the program.

“I don’t think it necessarily just introduces kids to a holistic understanding of East Asian culture, but I think it’s definitely open to all people of all ages,” Kanjanakuha said. “So if anyone is ever interested in it, they’re welcome to come.”