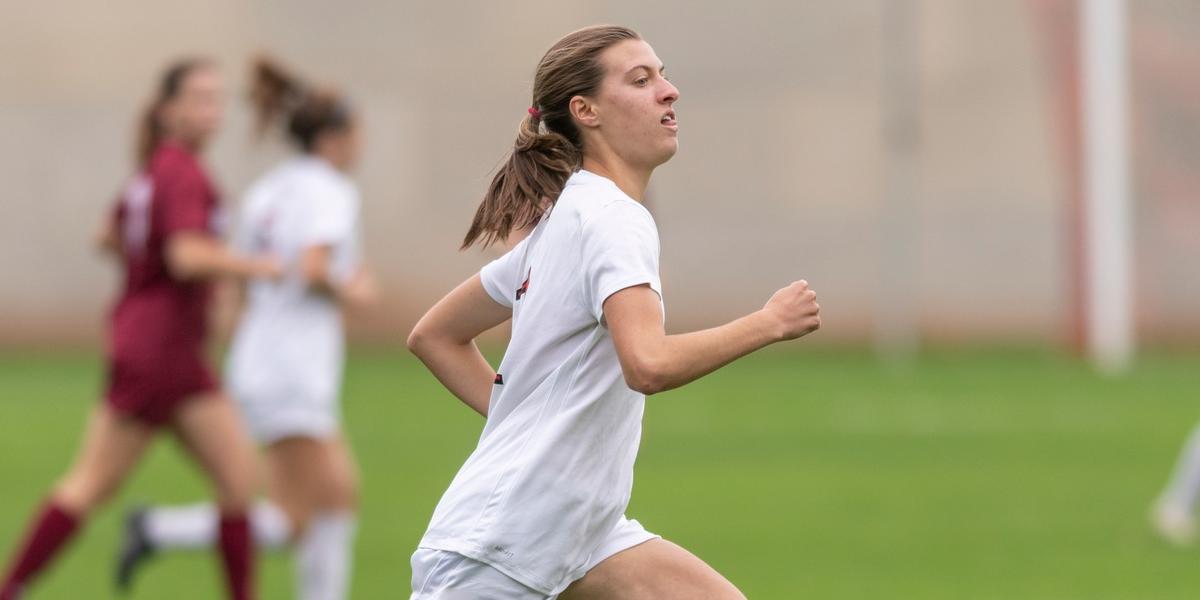 The women’s soccer team’s stellar play this season continued over their last four games as they went 3–1. During this latest stretch, the Cardinals pushed their overall record to 9–3–2 and their conference record to 4–3–2.

After the home shutout loss against Tufts back on Oct. 6, the then-22nd-ranked Cards needed to get back on track in conference play. Which they did, with a convincing 5–0 win over Bates at home on Senior Day. The Cards came out strong as Kate Hausladen ’23 scored the first goal of the game just under 15 minutes in. That was the only goal of the half as the Cards could not add to their lead before the halftime whistle. In the second half, the Cards were able to double their lead early when Audrey Lavey ’23 scored off of a header just under four minutes in. They scored again 12 minutes later after a shot by Melissa Wilhelm ’22 hit the post and Hausladen was able to get to the rebound in the box, scoring her second goal of the game. The Cards later added two more goals by Emily Ribatt ’21 and Grace Devanny ’23 to close out the resounding 5–0 victory. On offense as a whole, the Red and Black outshot the Bobcats by a wide margin of 32–4 and Lavey led the team in shots with six. On defense, goalie Sarah Hammond ’22 picked up her fifth shutout of the year, having to make only two saves the entire game.

The Cards then traveled up to Hamilton where they were able to get a crucial road victory over the Continentals by a score of 3–0. As has been the case with most of their victories this year, the Cards opened the scoring just over 30 minutes into the game as Nicole Brodkowitz ’20 scored off a corner kick to give the Cards a 1-0 lead that they took into the half. The score remained that way until, with just under 10 minutes remaining, Devanny scored to give the Cards a 2–0 lead and seal the victory. Hausladen tacked on a third with just over three minutes remaining in the game. On the offensive side of the ball, shots were pretty even throughout the game with Hamilton having a 20–19 edge. Hausladen led Wesleyan with four shots. Danielle Soto ’23 led the team in assists with two. On the defensive side, Hammond made six saves to pick up another shutout.

After the road victory, the Cards returned home to take on Mount Holyoke in their last regular season home game. Against the Lyons, the Cards were able to take care of business and extend their winning streak to three with a 4–0 win. The game was never close as the Cards outshot Mount Holyoke 48–0, led by Lavey who had a team-high nine shots. Andi Wiley ’22 opened the scoring for Wesleyan just over 20 minutes in. The Red and Black were then able to add two more before the half as Devanny scored twice in a span of less than 90 seconds right before the half. In the second half, the Cards were able to add a fourth goal as Soto scored just under 10 minutes in.

Unfortunately, the three-game winning streak was snapped on Saturday as the now 23rd ranked Red and Black fell to Trinity in a tight 2–1 game on the road. Trinity was able to get on the board first as they scored twice in the first thirteen minutes to take a 2–0 lead. However, the Cards were able to quickly cut it to 2–1 on a goal by Hausladen only a minute after the Bantam’s second goal was scored. The score remained the same until halftime. In the second half, Wesleyan had multiple opportunities to tie the game, including a missed penalty kick by Ribatt, but could not find the equalizer. Despite being on the wrong end of the result, Wesleyan outshot the Bantams 21–6 with Hausladen leading the way with five. On the defensive side, Hammond made one save in the loss.

On Wednesday afternoon, the Cards will take on Conn. College on the road in their last game of the regular season. This is closely followed by a NESCAC quarterfinal game on Saturday. The Red and Black currently sit in sixth place in the NESCAC standings. That could change, however, depending upon the result of their game on Wednesday and other results around the league. There is a lot to be determined in terms of seeding and where the Cards will play, with one regular season game remaining.