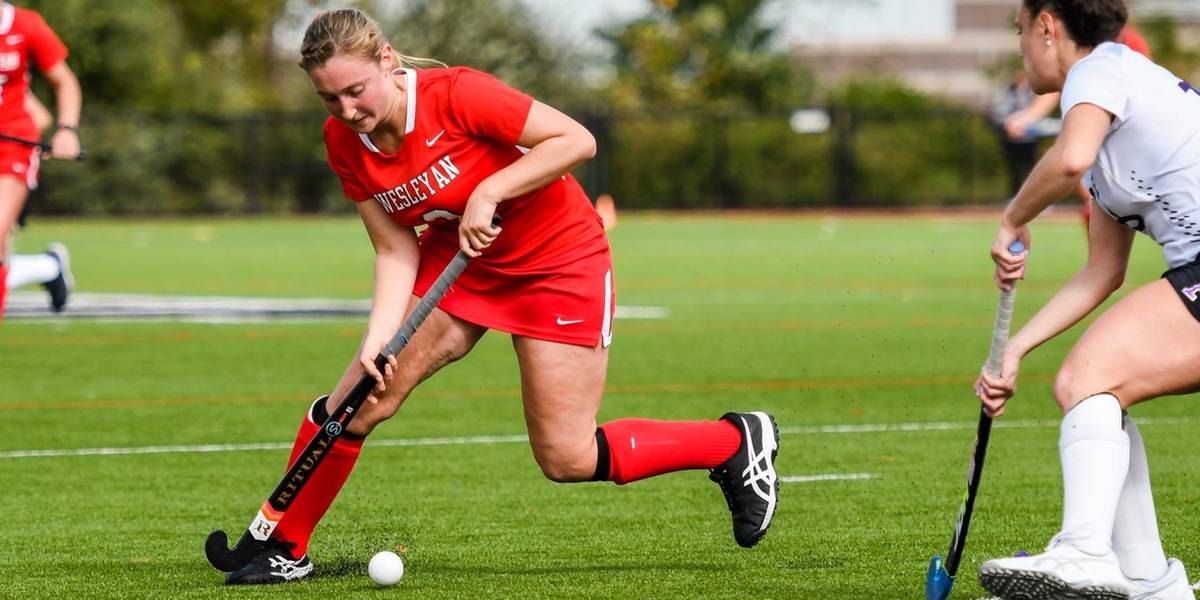 Since topping Tufts in their historic first conference win of the season, field hockey has fallen in their last five matchups. With just one more game to go of the regular season, the team slipped to 1–8 in the conference and 5–9 overall.

The Tufts matchup left the Cardinals hungry for more victories and with a winning record in their back pocket. Yet their 5–4 lead quickly turned into a 5–9 disappointment with losses at the hands of four NESCAC opponents and one non-conference foe.

The team’s backslide began with a failed attempt at Amherst, a team currently ranked just two slots ahead of Wesleyan in the conference. Hoping to get another ’CAC win under their belts, Wesleyan tried to come out hot, ending in a stalemate with the formidable Mammoths defense. The game went scoreless until an action-packed 45th minute. Amherst got on the board first, but Wesleyan responded just 43 seconds later with a goal from first-year Diana Schwarz.

At 1–1 going into the second half, the Mammoths attempted to charge through Cardinal defenders but came up short at the hands of goalie Delaney Wood ’20. At 52:09, Amherst overcame the NESCAC leader in saves to score once again. Schwarz tried to tie up the game with a pass from fellow first-year Leah Ewers, but the Amherst goal would be the game winner.

After the close loss, Wesleyan returned home for two matchups: first one against Bates, then one against Babson. Like the competition with Amherst, both ended in heartbreaking one-goal losses.

Currently ranked fifth in the NESCAC, Bates was expectedly a stronger opponent than Amherst. Yet Wesleyan didn’t let statistics throw them and came out strong with a shot from Olivia Baglieri ’22 in the first half.

The teams went back and forth but stayed at 0–0 until Bates came rushing out in the third quarter. Less than three minutes after halftime’s end, the Bobcats sunk the first goal of the game; their second came eight minutes later.

Down 2–0 with not much time to go, Wesleyan responded in the fourth quarter with several shots and an eventual goal from junior Amy Schaap. However, their success on offense would end with the lone tally, and Bates held onto the one-goal lead until the clock ran down.

Before the Babson battle, the Red and Black were undefeated outside of the ’CAC; unfortunately, the Senior Day game ended in another close loss, this time 1–0 at the paws of the Beavers.

Wesleyan looked strong in the first quarter, matching Babson in shots and gaining two penalty corner opportunities. This offensive effort continued partly into the second, yet the Beavers responded with force 20 minutes in. While Wesleyan had nine shots throughout the game and plenty of penalty corners, the Beavers continued to test Wood’s place in net and shot on goal 25 times: nearly three times as much as the Cardinals. They passed her only once at 43:47 on the clock with a shot that would secure the visitor win.

Wesleyan flew from their nest once more, this time to take on two conference foes: Hamilton and Trinity. Both ranked in the lower half of the conference—at seventh and ninth, respectively—Wesleyan aimed to up their ’CAC standings before the season’s conclusion.

Yet the team continued their losing streak with a close 3–2 loss against the Continentals. Hamilton got on the board quickly with two goals in just over 20 minutes. Wesleyan didn’t let their deficit increase to more than two and responded just 19 seconds after Hamilton’s second goal with a tally from junior Nikki Gerjarusak. Angered by the comeback, Hamilton upped their total with a successful score a few minutes later to bring the halftime score to 3–1.

Going into the second half, Wesleyan was sure the fight wasn’t over, and sophomore Grace Kohn sent Schwarz a pass to change the scoreboard to 3–2. The Red and Black had seven shots on goal in the remainder of the game, shot by five different Cardinals—first-year Lois Schwarz, Manning, Baglieri, Schaap, and Gerjarusak—yet couldn’t convert any to a game-knotting goal.

Although Trinity is only ranked one above Wesleyan in the NESCAC standings, the competition against the Bantams was not as close. The fellow Connecticut team pummeled the Red Birds 6–1, with four goals in the first 25 minutes of the game. Horowitz notched her eighth career goal in the effort.

The Cardinals keep traveling the state of Connecticut this week with a matchup against Conn. College on Wednesday, Oct. 30. They’ll look to boost their conference record to 2–8, a record that hasn’t been beaten since the team’s 4–6 run in 2013. The Camels are the only team ranked below the Cardinals in the conference and have a conference win. Hopefully, the Red Birds will keep their penultimate spot in the ’CAC instead of closing the season with a six-game losing streak.