Behind the Work Order: Environmental Studies Goes to Physical Plant 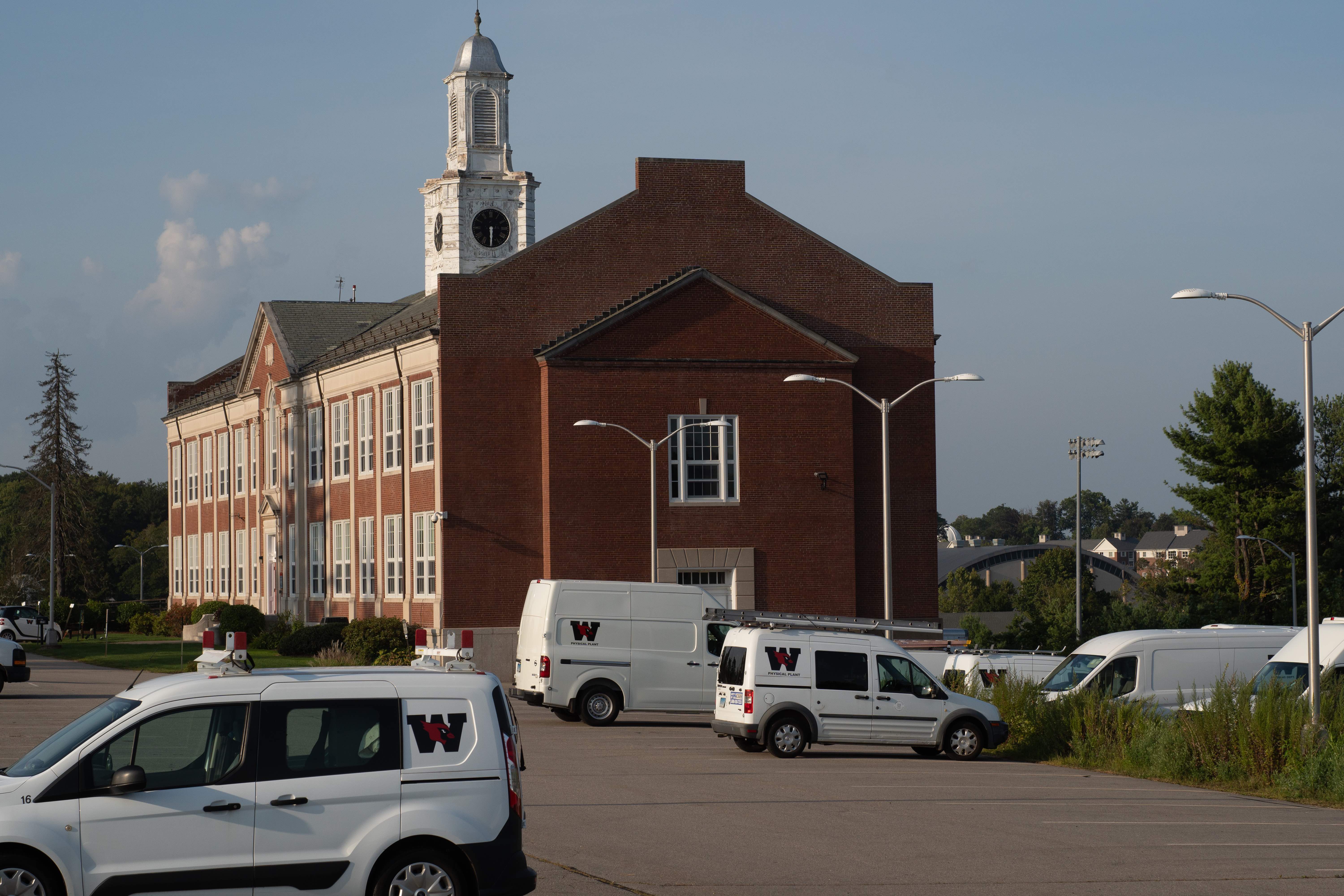 When, at 5:30 each Thursday morning, Physical Plant foreman Paul Martin begins his job, he knows that this day will not be like his others. At 7 a.m., an hour painful to even contemplate for most students, Nina Criswell ’22 joins him. Together, they address work orders, drive to a nearby Home Depot, and work in Physical Plant’s woodshop. For three hours, Criswell accompanies Martin through his tasks, watching and asking questions.

Criswell and Martin were connected by Criswell’s “Introduction to Environmental Studies” class, where students can opt to spend three hours a week with a Physical Plant worker, and later present about it, in lieu of a final project. Professor Helen Poulos explained that this is the most rigorous option by far, and she is always pleased by how much her students get out of it. The program, she explained, was inspired by Allison Orr, the founder and executive director of Forklift Danceworks, a dance company based in Austin, Texas.

“When [Orr] was a student, she was in the cafeteria for lunch and noticed a window washer washing windows and…the beauty of the work he was doing,” Poulos said.

After graduation, Orr went on to found a dance troupe that works with a variety of municipal and campus workers, from trash collectors to engineers, and choreograph dances inspired by their daily routines. She has worked throughout the country, and often draws huge audiences to see the collaborative performances she produces.

“[Her] work really transformed into art that raises awareness about the unseen, and the work that people do that we depend on but don’t think about,” Poulos said. “It was this opportunity for her to interact with these folks…. It provides a window into a part of humanity that might be very different than yours. And what a great gift to be able to do that in class.”

Poulos had an inverse experience, starting with a basis in physical science, and learning slowly about the way art can intersect with it. Today, she works closely with and is inspired by Orr, and jumped at the opportunity to use her as an inspiration in her class.

“I’m trained as a natural scientist, and when I came to Wesleyan I started having interactions with all of these artists, and I [noticed how] amazing…their process is, [and how it’s] actually similar to my process,” Poulos explained. “Because it’s experimental, experiential and they do a lot of fieldwork, and that’s been a real gift to me, to be able to have those kinds of interactions. So that appreciation, combined with my evolving understanding of what environmental studies is and the importance of the arts in communicating message [made it clear that this project should find a home in Environmental Studies.]”

Orr has had a long relationship with Wesleyan, which began with a fellowship in the College of the Environment. Having students shadow Physical Plant workers was not Orr’s idea, but it was directly inspired by her choreography process, which always includes immersive work in industrial workplaces. Orr’s work, and specifically the project that Criswell and Martin are a part of, has been housed in Environmental Studies because of the importance of the physical environment and labor activism to the environmental movement.

“The built environment is equally part of environmental studies as the natural environment,” Poulous said. “And so if students can come in and have this experience where they understand the workings of how buildings on campus function and are repaired and maintained and done so efficiently [their understanding of Environmental Studies will be strengthened].”

But this intimacy with oft-unseen work, and the people that perform it, can be uncomfortable, especially at first. However, both Criswell and Poulos highlighted the value of that discomfort.

“I was a little nervous about [shadowing Martin, because] I didn’t know if I would just end up standing there and watching, but we had some really good conversations and I even helped build some stuff, which felt very satisfying,” Criswell explained. “[Martin and I] fixed one of the doors in the music building that didn’t close all the way that had been so annoying for me for awhile, so seeing that every day when I come back and practice and knowing that it closes properly feels really great.”

Poulous said that student reflections often echo this original discomfort, and the transition that Criswell made to friendship with Martin.

“You can see that they’re still struggling, adjusting, still trying to figure out what the meaning and the relevance of the work is to them and the Wesleyan community at large,” Poulos explained. “They’re still talking about what to ask, when they can ask, how they can ask…. And other times they’re writing that they’re learning a lot about this person’s personal life, and [that they don’t understand why.] And that’s part of the experience, to teach them about the process of embedding with a group of people and learning how to be respectful, how to understand, how to listen.”

As she has gotten more comfortable, Criswell’s time with Martin has allowed her to explore a side of the University that she rarely sees, and a new modality of learning.

“[Physical Plant] is a space that is completely different from school work, from art, from anything else I do,” Criswell reflected. “[All of that is] centered on me and what I’m learning and [on] obtaining new skills, but [at Physical Plant] it’s been centered on being an observer and understanding a new aspect of what happens here. And meeting Paul and everyone else that works at Physical Plant has been great; they’re all super, super nice.”

Criswell has noticed a difference in the way she interacts with Wesleyan’s campus now that she has explored so much of it with Martin, and through the lens of maintenance, upkeep, and carpentry.

“I walk around campus and think about all the little fixes that happen in a day, and how many of those fixes would be easily fixable by students and professors,” she said, noting that Physical Plant handles everything from leaking ceilings to twisted window shutters. “[I see] how many work orders [Physical Plant] gets at one time, for a lot of things that would have been fixable.”

For Martin, who generally works alone, Criswell provides company and a new perspective on his job.

“Sometimes I think that what I do is kind of boring, and it is—I’ve been doing it for so long that it has become kind of mechanical at this point,” Martin said. “But to other people it’s interesting and so we get to talk about different things.”

In about a month, Orr will visit the University to help Criswell, and the other students who have been shadowing Physical Plant employees, craft a final project. Criswell and Martin have been thinking about putting together a model toolbox paired with a guide for Wesleyan students living in houses or graduating and renting their first apartment.

“There’s so much that people can fix on their own, and why not do it?” Martin asked excitedly. “A leaky sink, beyond carpentry, even plumbing. There are things [that Wesleyan students know] that I’m still learning, but I also have a lot to teach.”

Madeleine Matz can be reached at mmatz@wesleyan.edu.