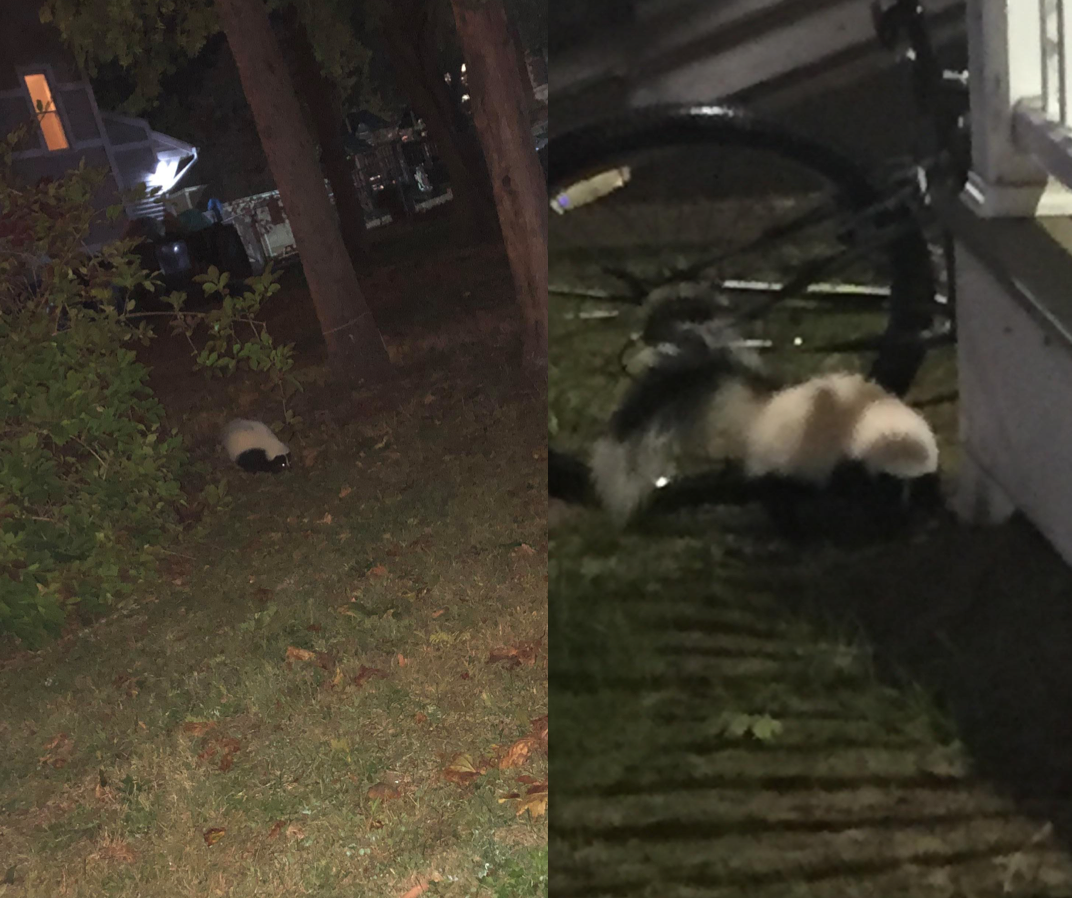 The WesAdmits posts began trickling in from the very start of the semester.

“Skunk lurking around pine and fountain, watch out,” read one, dated Sept. 3.

It only took six days for another post to appear.

“think there is a skunk inside the garbage by lowrise fyi!” came the Sept. 9 post.

Students have been claiming that, this fall semester, the skunks are more ubiquitous than ever. Sightings became a popular conversation topic around campus.

“I think a lot of them live under the houses on Cross St (and other houses on campus) which are all located right along roads,” Sabrina Koetter ’20 wrote in an email to The Argus. “I have seen it, yes. I have contemplated its origin.”

Koetter expressed concern for the particular skunk she saw, citing its unusual appearance as a possible sign of distress.

“The skunk i saw…had arguably the most fucked up tail [I’ve] ever seen on a skunk,” she wrote. “It should be fluffy right? [Pepé] le Pew like? Well it wasn’t. It looked weak, like a dog tail or something. I’m not sure if this is any indicator of skunk health, but it looked abnormal. I’ve seen my fair share of skunks in this life and on campus in general, and this tail just wasn’t skunk-like.”

Despite being close enough to take note of the skunk’s tail, Koetter’s quick thinking kept her safe from harm.

“When I saw the skunk, I was sitting on my porch, having a loud conversation with my friend on the phone,” she explained. “I pretty much immediately hung up so I wouldn’t alarm the animal and I slowly went back into my house. I watched it from inside and I was getting so nervous because it was approaching the road where cars were actively driving by and playing loud music…. I think it’s telling that despite the cars and loud music, it didn’t spray. The skunks that live permanently on campus are probably more used to this kind of environment versus skunks that just wander out of the woods.”

Tessa Whelden ’22 may not have seen the tail on the skunk she saw, but she wasn’t lucky enough to escape an odorous incident.

“About a week ago, a skunk got into the screened-in mudroom leading to the kitchen door to Lighthouse [210 Cross St.],” Whelden explained. “There is a trash can in that area, so it is assumed that he was interested in exploring the garbage.”

By the next day, the room was filled with the smell of skunk spray that quickly spread to the rest of the house. Though she didn’t witness it directly, Whelden has a solid theory as to why the skunk employed its infamous defense mechanism.

“The next morning, what was left were what seemed to be weapons that must have been thrown at the skunk in an attempt to scare him off,” Whelden said. “There was a knife, a tree branch, and silverware left on the ground by the door. However, as we all know, a scared skunk is a smelly skunk…. I was honestly appalled at the fact that students responded to the skunk’s presence by throwing items at it…. The most obvious problem with that is that it just scares the skunk, and a skunk only sprays when it’s scared.”

Koetter, an Earth and Environmental Science major, weighed in on the situation that Whelden described.

“It’s very disturbing to know that some people have been throwing things at the skunks to deter them,” she wrote in a follow-up email. “Living on campus is probably a pretty stressful environment for them because they have to deal with a lot of loud noises, cars, and people when they come out at night to look for food and take care of skunk business…. They are way more scared of us than we are of them, and something like that could definitely trigger them to spray if they felt threatened.”

“Don’t startle them!” Sweet advised. “Don’t act aggressively towards them, and they will not turn their tail on you and spray.”

But students aren’t the only ones who have seen skunks. In fact, there’s a history of them on this campus. Though he hasn’t seen many lately, University President Michael Roth ’78 shared his own story of a close encounter, one that took place in his first year.

“We walk [our dog] Mathilde very early in the morning,” Roth explained.  “And there were often skunks behind WestCo—which I just thought was, you know, somehow appropriate…. Mathilde was skunked our very first week on campus, and she was 10 years younger, you know, so she just ran.”

Roth reiterated that he hasn’t seen skunks around lately, however.

“This is news to me,” he said. “I wish I were more up to date on the skunks…. In the past I’ve seen them, but—maybe it’s because I haven’t been out at dusk. We do have groundhogs living under our house. They’re like bears now. Huge. And if you’re a dog, they’re dangerous. They’re not as problematic as skunks, though.”

University staff charged with monitoring animal activity on campus claim that, despite the number of student sightings, there is nothing unusual about this year’s skunk population.

“Anecdotally, I do not believe we have seen an increase this year,” Physical Plant Director of Environmental Services Bill Nelligan said. “Skunks and all wild animals—like woodchucks and opossums—can increase and decrease in cycles over the years, due to environmental and weather conditions. Some years are better for breeding and survival rate. It was a pretty light winter last year and a great, food-filled year for nomadic eaters this summer.”

Nelligan went on to explain that what seems like a lot of different skunks may in fact be the same few, seen in various locations.

“Nomadic species like skunks are also territorial,” he wrote in an email. “What is perceived as an increase of skunks might actually just be 1 or 2 working a territory, moving every several days, not actually a large population. Male skunks are known to roam up to 5 miles a night, especially during the breeding season (Feb-April).”

Sweet made the same argument.

“This year is not any more than last year,” he said. “This is New England, and they’re all over the place here.”

But some students strongly disagree.

“I saw four skunks walking down fountain in one night—it was a wild ride,” Quinn Tucker ’20 said. “I’ve never seen them before like this, ever. Actually ever.”

Regardless, Sweet offered advice for students looking to keep skunks at bay.

“I would say what would attract them is trash on the ground, because they’re obviously looking for something to eat, so if you keep your property clean, and the ground clean, you’re not attracting them,” he said. “So you should not have a problem. That doesn’t mean they won’t be walking by your house, but they definitely will stay there if you have food outside or any kind of garbage on the ground.”

Since the incident at Lighthouse, Whelden has taken precautions that echo Sweet’s advice.

“I took it upon myself to tape our trash cans shut, and others should do the same to keep animals out,” she said. “Instead of harming and blaming skunks, we should be doing what we can to prevent their presence by keeping our doors and garbage cans shut. Also, if a person sees a skunk, they should walk away quickly and quietly so as not to scare the skunk, instead of engaging with it. All animals should be treated with respect, even if their presence is frustrating and concerning.”

“When food/garbage is left around, it incentivizes the skunks to hang around campus and get an easy meal, but eating our trash can’t be healthy for them,” Koetter added. She maintained that so long as people keep their distance, there’s no reason that skunks and students can’t coexist on campus.

Koetter wrote that she enjoyed watching the skunks navigate the campus—from the safety of inside her house, that is.

“As long as we respect each other, I don’t mind the skunk being my 5th housemate,” Koetter wrote. “They become less active when it gets cold, so if they find a safe and warm spot under 105 Cross this winter then I’m happy for them. We all want to be warm, comfortable, and fed.”