Volleyball Climbs in NESCAC Standings, Takes Down Middlebury and Amherst 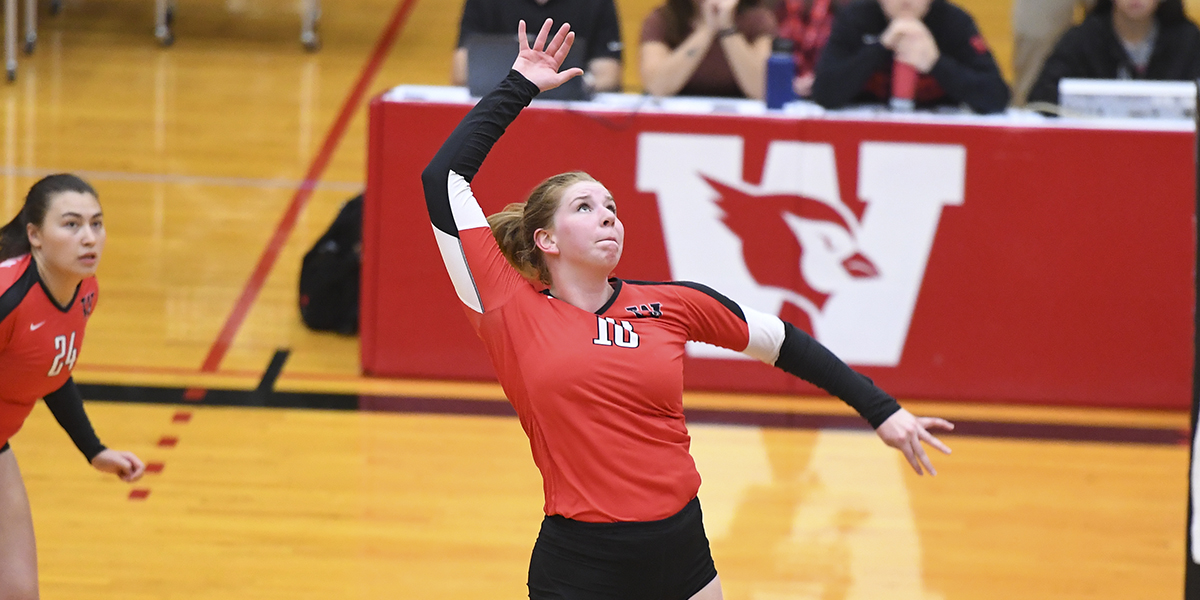 With two wins over strong NESCAC opponents, volleyball has separated itself in the conference standings over the common rabble. After drubbing Keene State College 3–0 earlier this month, No. 24 Wesleyan emerged last weekend with away victories over both Middlebury and Amherst. Traveling all over New England in search of triumph, the team can return to Middletown knowing they’ve positioned themselves well in what’s shaping up to be a top-heavy conference playoff bracket.

The Cardinals have feasted all year on weak out-of-conference opponents, but No. 4 Middlebury, boasting a 9–5 overall record, seemed to present more of a challenge.

Last Friday, the Red and Black swiftly proved this writer wrong with a pounding of the Panthers, 3–0. Wesleyan jumped out in the first set to an 11-3 lead before sealing the deal at 25-12 by way of a Bella Ahearn ’23 kill. In the second, three straight aces by Olivia Guidotti ’20 helped the Cardinals emerge from the doldrums of an 8-5 lead to eventually win 25-8. Fellow senior Nicole Hilton also contributed to the offense effort with six kills in the set. Middlebury finally found its footing in the third, tying it 17-17. The teams traded short runs, leaving a 21-20 set decided by a 4-1 Wesleyan push and capped by a Hilton kill; she would ultimately end the day with a team-leading 14 kills. Kaira Muraoka-Robertson ’20 chipped in with 32 assists and 14 digs, while junior Phia Bellizzi had a match-high 21 digs.

“Our defense is what drives our competitive spirit, and we have been serving and defending with more intensity in the last few weeks,” he said. “Our offensive rhythm is getting better also with the return of some veterans who are back from injuries, but our defense is what has frustrated our opponents.”

That defense has been bolstered by the impressive play of their libero, Bellizzi. The All-American leads the conference in total digs and ranks second in digs per set, playing a part in her recognition as NESCAC Co-Player of the Week earlier in the month. Although her defensive numbers are down slightly from her showy totals last year, Bellizzi has shown substantial improvement in her service game, as she is on pace for a career high in serve attempts and aces.

After the success at Middlebury, the Cardinals migrated south to take on Amherst for a heavyweight showdown in the Pioneer Valley. The Mammoths had been 5-0 in conference play with wins over Bates and Middlebury.

The first set looked like the match might spell trouble for Wesleyan. The Red and Black blew a 19-13 lead after a 7-1 Amherst run. With the set locked at 20-20, Amherst strung together three straight to steal the first set, 26-24. Down but not out, Wesleyan responded in the second; tied at 3-3, the Cardinals outscored Amherst by a 22-7 margin and won 25-10. Wesleyan never trailed in the third, opening the set 6-0 and seizing it with a 25-17 score. In the match-deciding fourth set, the Cardinals briefly trailed 6-5, before a 9-1 run put them over the top by an identical score of 25-17.

Somera took an analytical view of the team’s performance against their Little Three rivals.

“I think each opponent in our conference has specific things they do well, which gives our team an opportunity to work and play against their strengths,” Somera said. “Amherst, in particular, has two very good left side attackers and it was good to see how they attacked our defense and note the areas they were successful. We will take a look at the video and create drills and game situations to work on the things we could execute more cleanly.”

With the 3-1 win, Wesleyan handed the Mammoths their first conference loss of the year while simultaneously knocking them down a peg to number three in the conference standings. The Red and Black, on the other hand, now sit at number two, leading Amherst by one in the win column but trailing Tufts due to an early-season loss to the Jumbos.

However, Somera insisted that Wesleyan’s focus lies not on the standings but on their progress as a cohesive unit.

“I don’t think too much about the conference standings.  We’re really trying to maximize our potential and build trust within our team,” Somera said.

The Cardinals are off until Thursday, when they will host last-place Trinity. Yet their match the next day against Juniata College might be of more interest to fans of bona fide competitive sports. This serves as a rematch of last-year’s Elite Eight contest, and by the looks of it, neither squad has slowed down; Juniata is tied with Tufts for the number 14 spot on the DIII volleyball rankings. On the 25th, Wesleyan gets a shot at the Little Three title in a matchup against sixth-place Williams.