WesCeleb: Levi Ask ’20 Has Some Sap to Spill 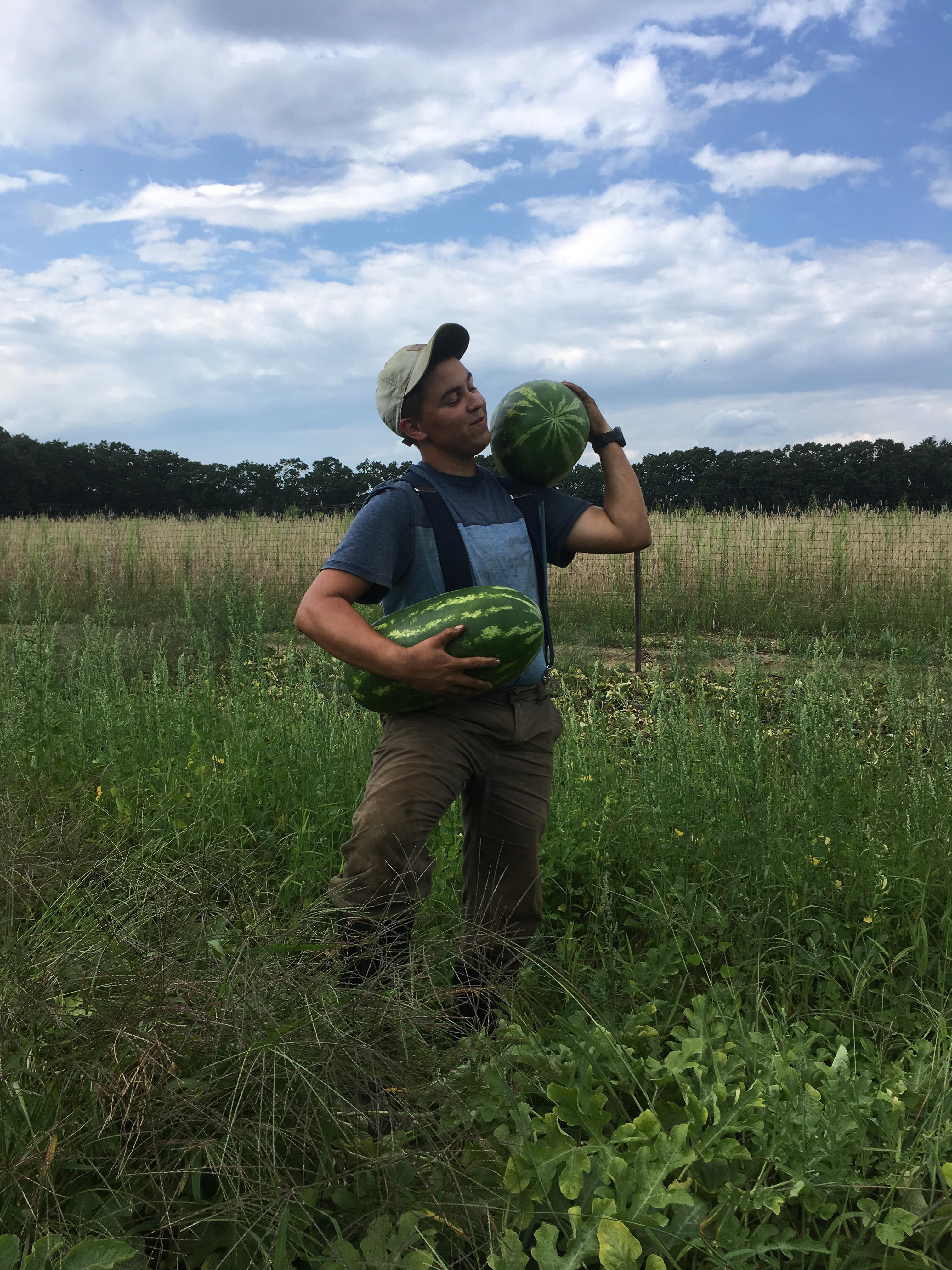 Massachusetts native Levi Ask ’20 can typically be found in the tunnels of the CFA, likely with saw and sanding paper in hand. Or perhaps you’ve seen him at work in the psych lab, or else in the Farm House kitchen, boiling down gallons of sap on the stove. The Argus sat down with Levi to talk cabinetry, cows, and other passions.

The Argus: Why do you think that you’re a WesCeleb?

Levi Ask: What a fun question. I don’t know. I can’t walk anywhere without greeting someone for some reason. I might not know them, but I’ll greet them. It’s a terrible thing, it means getting from A to B is impossible and takes forever and my housemates are like, “Why do you leave so early for class?” and one, it’s because I have to be there early, but two, I have to account for some stoppage time in there. That’s an obnoxious answer, but it’s true.

A: I know that you went to a tiny Waldorf school growing up. What was that experience like?

LA: Well, they’re very small, and everyone knows everything about everyone, which means someone’s mother is going to ask you about your skin condition that you have never spoken about to anyone except your doctor, somehow.

LA: Yeah. It’s a lovely place to be a kid and leads you to having a lot of very niche skills that perhaps the modern world doesn’t need—but if you ever need wedding invitations, my calligraphy’s quite nice. That was how we learned cursive, in the third grade. We got fountain pens. Actually first, we got literal feather quills, and then we got fountain pens and had to learn with those. But some of it is very useful. All of this woodworking I’m using for my thesis, I learned in the fifth grade.

A: Did they ever tell you why they were teaching you woodworking?

LA: No. That’s the other thing about Waldorf is you might have a million questions about why on God’s green Earth something is happening and they won’t answer it. They’ll be like, “But look at the flower,” and you’ll be like, “What?” And I went to a very small liberal arts high school between my 14 years of Waldorf and Wes and that was another very art-based school. So a very artsy high school and suddenly I got to Wes and there were more than 100 people in a given moment and that was deeply overwhelming.

A: Were there any other niche skills you learned in Waldorf school?

LA: I can make you anything out of beeswax, I can cross-stitch, I can knit, I can crochet, I make very nice doilies. That’s a lie—my sister makes the doilies, and I make pot holders. We did learn how to cook a bit, and that was very useful, because now I watch other college students cooking and I want to hold their hands while they chop things. It’s very bad.

A: And did you get involved in farming in high school as well?

LA: That was post-high school. That was between high school and college. The Waldorf school would get shipped out to a dairy farm every year…and that’s where I got my hands in the dirt, so to speak. When I was looking for jobs, I applied to this farm I’d been going to forever as a farm stand. It’s a really cool operation—shameless plug for Hutchins Farm in Concord, Mass. Farming’s been a really wonderful outlet. You have to be very careful about when you start being alone in the woods for days on end because there’s this thing that happens where everything you’ve ever done that might be a little bit cringey will play on a horrible repeat until someone speaks to you again, which could be eight hours from when you started farming.

A: You’re also famous on this campus for your sap boiling.

LA: Oh good god. I was just talking to my printmaking professor about this. That’s another fun activity where you can just sit somewhere for hours. It’s like a combination of watching paint dry and watching a pot boil.

A: About how many hours do you think you spent boiling sap?

LA: Let’s see…. Oh God, probably in the realm of like a full two days if you added it up, if not more…. You black out in there somewhere. It’s very humid.

A: Any deep realizations?

LA: No, I just wanted to make a better spoon for it.

A: That’s a very representative sentence for you, I think.

LA: That’s pretty much what my life is right now. I’m making spoons for my thesis, I’m teaching people to make spoons.

A: Yeah, how is your woodworking forum going?

LA: It’s good. I like teaching a lot. I just also don’t like my own voice, so there’s something happening where I demo something and grunt at them, and I think they’ve finally found out that means, “now you do it.” It’s hard to say. There’s been minimal blood loss, which feels like an accomplishment: all fingers retained. And it’s so exciting to see someone make something from beginning to end and be so happy to make something so beautiful that’s also useful. The best is watching someone put oil on a piece of wood for the first time. It’s so pleasing, and it just completely transforms what you’ve made and it’s just—I feel like a parent, in the best way, and I don’t think they have any idea that they’re looking at the thing they just made like it’s their child.

A: So you’re studying both studio art and psych. How did that come about?

LA: Well, I knew that I wanted to do studio art and I had no idea that I was going to do anything else. I just kind of wanted to do the liberal arts thing, and take a large spectrum of subjects and figure out what the heck I was going to do with a studio art degree. I took Intro Psych because a bunch of my friends were prospective psych majors…but I just really loved psych and have loved all the other classes I’ve taken in psych since then.

LA: Yeah, I work in the CAPS lab, which is the Cognitive Affective Personality Sciences Lab. We collect a lot of brain wave data…. We’re working on an extension of a study on gratitude. It’s basically how gratitude impacts or does not impact temporal discounting, which is the propensity of humans to discount the value of future rewards in favor of taking more immediate rewards…. I’m looking at some research opportunities post-grad because, again, what was I going to do with a studio degree?

A: So you’re thinking more along the psych route?

LA: Yeah, I think ultimately I want to be a psychotherapist of some sort, and eventually have my own practice which is predicated on activity-based therapy with farming. I think it’s a lot easier to talk to someone if you’re doing something, which is something I’ve learned working at the farm, that you can be perfect strangers with someone at the start of the morning, but by virtue of doing the same very repetitive methodical task alongside someone, you feel more comfortable, and just doing something makes you more comfortable to open up.

A: So tell me about your studio thesis. What are you working on right now for it, and what artists are you inspired by?

LA: I was looking at a little bit of Mark Dion’s work. He does this thing with kind of a modern Wunderkammer, which is a cabinet of curiosities. That’s kind of where I started, but I think I kind of drifted away from it a bit. He orders objects in an interesting way, and that’s what I’ve been looking at, or how [his pieces] use repetition or choose to organize multiples of work because that’s one of the things I’m interested in—multiples of multiples—which is why seeds are kind of interesting to me, because there are so many variations of them.

A: What about cabinets is interesting to you?

LA: I really like systems of storage and I’m really interested in craft. I like thinking of craft as fine art, and cabinetry and storage systems feel like a good way of getting into that. I really love working with wood. I’ve also been looking at Zoe Leonard for repetition, [Piero] Manzoni has some really interesting pieces that are stored and labeled just as they are.

A: What do you mean by that?

LA: Like it’s just “a single line” labeled, “line, [whatever the length is].” This archival method seems so related to its storage because they’re stored in these little tubes with a cap and that’s the art object, you don’t even see the piece itself, you just see the storage.

A: So you’re interested in how much of something is seen or stored?

LA: I guess it gets into…there’s some queer narrative that I’m writing there for myself. Also I have to be super careful there, because I don’t want to be like, the visible queer kid making closets for my thesis, that’s my nightmare…. I woke up one morning and was like—I’m making closets!

A: Do you collect anything?

LA: Not really…. I used to collect rocks.

A: But is there any type of thing that you’re particularly drawn to as an object, even if there’s no use?

LA: I’m drawn to things that I perceive as well crafted, or things that have a comical value. Here’s a good example: I bought the most hideous beer stein from Goodwill. It’s heinous and I know it and I love it. It’s so solid. That was something that I was illogically drawn to. But I’m drawn to well-made knives and cutting boards, crafted objects, things that I know that hands made, which complicates the multiplicity thing that I’m into. Because I want to make everything by hand, and I’m not interested in digital aid, I’m not interested in 3D printing the same thing a million times or having a million perfect casts of something.

A: So you kind of went from the cabinet, to collecting, to repetition and variation.

LA: Yeah, and now I’m at what you can easily have many of, and I want to use more natural material than unnatural material because I don’t want to put more plastic into the world if at all possible, and I think it’s really easy to do that when you’re a college student on a budget. I did too much resin casting in high school.

LA: [Laughs] Yeah, so seeds are interesting. Also, they’re so wholly ungendered to me that I’ve been thinking about that a lot.

LA: They’re easy to relate to the body in some way or another because of gametes, and I think the potential of them is really interesting and non-gendered.

A: And to loop this conversation back to Wes, what’s one of your favorite Wesleyan memories?

LA: Any studio class you take, you spend an unholy amount of time in the studio with your classmates, and the kind of bonding you can experience making art at 3 a.m. with people you probably won’t speak to otherwise is kind of amazing. And then you speak to them otherwise because you had this wild bonding experience and went to bed at 7 a.m. and so did they.