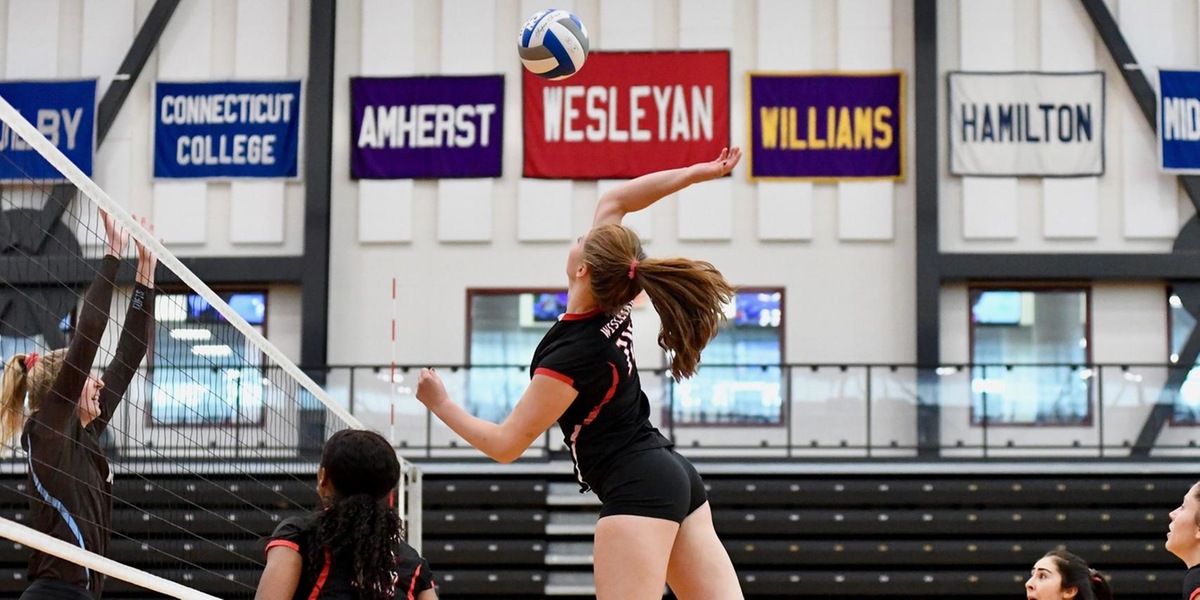 After an uncharacteristic loss on the road against Susquehanna University, volleyball rebounded with the usual dominance fans have become accustomed to, winning four straight games to sit at 12–2 overall (4–1 in conference). Climbing to third place in the NESCAC standings, Wesleyan has a golden opportunity ahead to wrestle the number one spot away from Amherst and Tufts.

Susquehanna came prepared to defend their home court on Sept. 27, as the Cardinals traveled to Selinsgrove, Penn. to take on the River Hawks. Wesleyan held a tight lead in the first set, but a four-point run by the home team knocked the Red and Black off their feet. They eventually managed to recover, even drawing as close as 23–20, but Susquehanna would ultimately finish off the set to win 25–20. The River Hawks continued to pile on in the second, building up a 17–7 lead that would translate to a 25–19 victory. Wesleyan briefly led again in the third, 3–2, but Susquehanna again pulled ahead, this time by a comfortable 21–12 margin, and completed the sweep with a 25–16 thrashing of the Cardinals. Harper Graves ’21 led in kills for the Red and Black with eight, while Kaira Muraoka-Robertson ’20 dished out 22 assists. Phia Bellizzi ’21 contributed defensively with 19 digs.

Luckily for Cardinal superfans, it didn’t take long before the team regained its balance. The following day, Wesleyan squeaked by Stevens Institute of Technology, 25–23, 25–17, 26–24, then stomped down CUNY Hunter 25–16, 25–16, 25–11. Sophomore Maddie Kurke led offensively against Stevens with 13 kills. Brina Kuslak ’23 also turned in a strong effort with nine kills off a .692 hitting percentage. In their second match of the day, Gabby Bennett ’20 recorded nine kills, giving her a total of 15 between the two matches. The team showed strong fundamentals against Hunter, with a combined .330 hitting percentage.

While the contests down south in tropical Pennsylvania might have served as a nice vacation, the Cardinals’ real challenge lay to the north. On Oct. 4, the Cardinals traveled up the east coast to take on Colby, before continuing their Maine business trip at Bates the next day. With two critical NESCAC games ahead of them, Wesleyan came ready to face some tough competition.

Wesleyan might have been a bit overprepared; Colby was not close to tough competition. The Miami Dolphins of DIII volleyball were humiliated on their home court in the Cardinals’ most lopsided contest of the year. Wesleyan started out the first set on a stampede, trampling the Mules for a 10–0 run. Things didn’t improve for Colby, as they would eventually fall 25–7. Showing signs of life, Colby actually led 14–5 in the second, before allowing the Red and Black to respond with a 14–5 run of their own. Wesleyan would take that set as well, 25–22. Smelling victory, the Cardinals fired on all cylinders as they completed the sweep by way of a 25–4 blowout of the hapless Mules. Overall, the team hit .398 as they controlled the match from start to finish. Ten different players chipped in with a kill, with Mia Hogan ’20 pacing the squad with 11 kills. Junior Grace Rose kept plenty involved with 17 assists, and Kuslak patrolled the net with three block assists.

In Maine the following day, Bates put up a strong fight. The Bobcats fought Wesleyan in every set and even drawing blood with a third set win, but ultimately couldn’t hang with the Mysterious Ministers from Middletown in a 3–1 victory. The first set was a nail-biter, with a 19–19 knot only being settled by a 4–0 run and a Stasie Litinsky ’20 clincher to seal the deal at 25–22. The second remained similarly tight, and even rested at 25–25 as the set drew to a close. Fortunately for the Red and Black, Bates butt-fumbled the game away with two straight errors, letting the Cardinals slip by 27–25. The Bobcats clawed back in the third set, staving off defeat after burying Wesleyan by way of an 8–2 run. The home team would never trail, and won 25–21. Absorbing the punches, the Red and Black hit back in the fourth; trailing 18–17, Wesleyan took off on a 7–2 run and finished off their foe 25–19.

After the game, head coach Ben Somera applauded his team’s resilience against a feisty 10–5 Bates squad.

“Our matches with Bates are always intense because both teams play good defense and the rallies are long,” Somera said. “[It] was a really good win because we never stopped fighting. Even when we got down big in the third set, we continued to play hard and chip away at their lead. That was important because even if you don’t complete the comeback, you head into the next set playing well.”

There’s no rest for weary Wesleyan ahead, as the Cardinals play their next three on the road. They take on Keene State College on Oct. 10, then will look to fend off fourth-place Middlebury the very next day.

Their biggest challenge of the rest of the season, however, will come on Saturday, Oct. 12, against first-place Amherst. After losing to now second-place Tufts back in September, any hope of a top-two finish (and a Little Three title) likely rests on defeating the Mammoths in their home stadium. A strong performance in the three upcoming games will put the Cardinals into good position, as all eyes turn toward their rematch against Juniata College on Oct. 18.