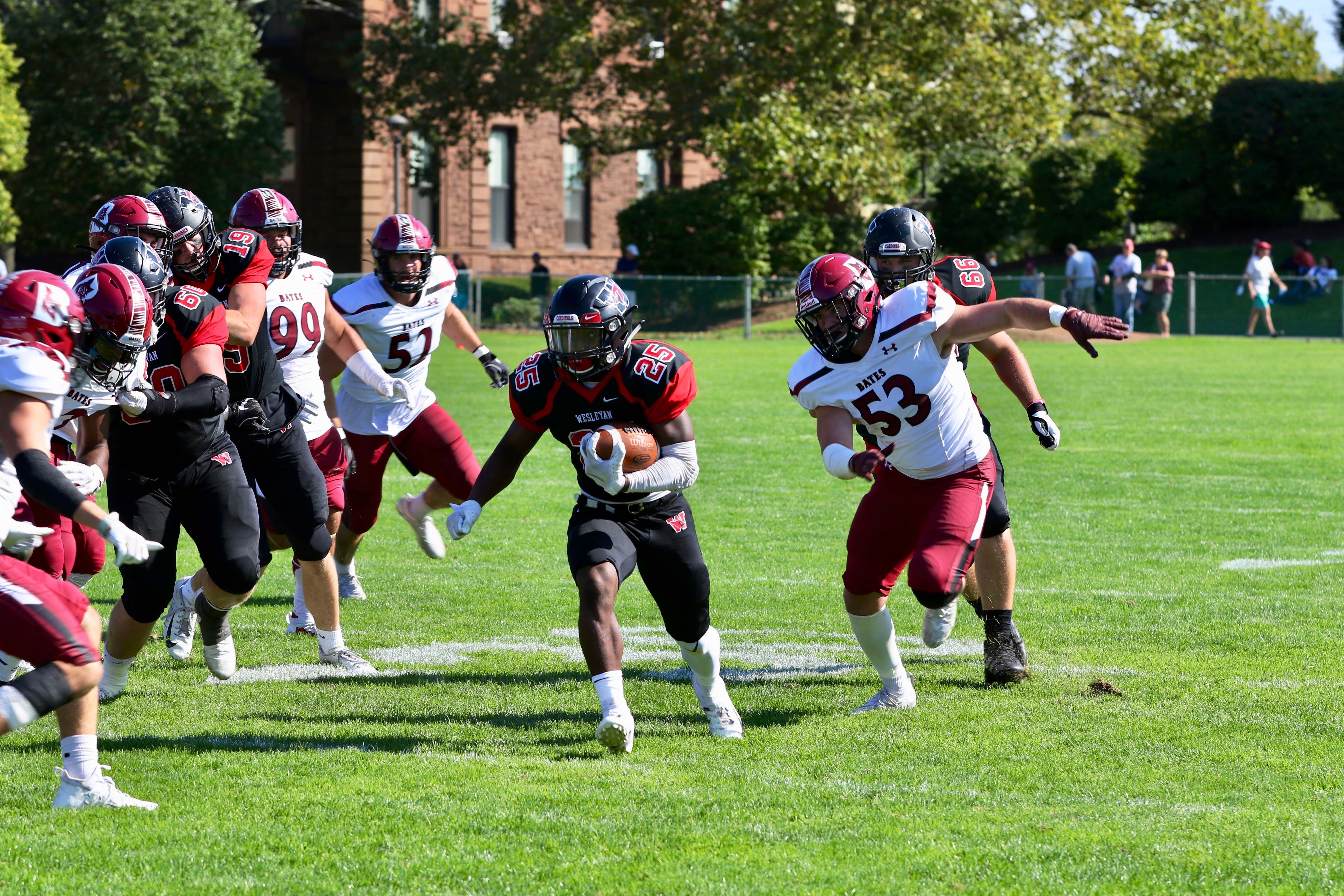 Cardinal football continues its hot streak as the team trounced Bates last weekend, 48–12. This final score is even deceiving, as Wesleyan put up 34 points before Bates had even scored once. The Red and Black also scored in every single quarter of the matchup. Bates only managed 117 total yards of offense in comparison to Wesleyan’s 394. It was nothing short of complete domination throughout the game.

Ashton Scott ’22 was named as the NESCAC Offensive Player of the Week but was not alone in terms of stand-out play. Danny Banks ’22, Julian Ross ’21, and Chase Pratt ’20 all snagged interceptions during the match while sophomores Matthew Simco and David Estevez and junior Joe Scancarella all gained over 35 yards on the day. Simco and Scancarella both caught touchdowns for the Red and Black.

Statistically, it is clear that Bates was completely outmatched at every step. The offense gained 212 yards through the air and 182 on the ground. Glenn Smith ’21 was the leading rusher for the Cardinals with 118 yards and two touchdowns. Wesleyan gave up one turnover, a fumble in garbage time, compared to the opposition’s three interceptions and two fumbles (which Bates both recovered).

In addition, Wesleyan had three sacks by Nick Livingston ’21, John Lewis II ’21, and Babila Fomuteh ’21. In fact, Livingston is tied for the most sacks in the NESCAC with three and a half, while Scott leads the conference with eight passing touchdowns. Sophomore Isaiah Miller also had a strong performance, with 2.5 tackles for loss.

Wesleyan is tied for first place in the conference, along with Amherst and Middlebury. The Cardinals could be the best team of the three, however, as the Birds boast not only the highest scoring offense, averaging 35.3 points a game, but also the best scoring defense, 10.7 points per game. The Cards also have the most takeaways in the conference, with 12.

Wesleyan may have not scored on the opening drive of the game, but when Pratt was able to intercept Bates on their first drive, the Red and Black quickly got on the board with an Estevez rushing touchdown.

The next stretch of play was less dynamic, as both defenses managed to contain their opposing offenses well. Fomuteh and Lewis II combined for a devastating strip sack. Although the Bobcats recovered, Bates was pushed back 18 yards. Unfortunately, the Cardinals could not recover the loose ball, but Bates were forced to punt in a bad field position. Once again, Wesleyan quickly marched up the field to finish the drive off with another Estevez touchdown on the ground.

As the first quarter came to a close, Bates continued to go nowhere on offense. Fomuteh once again sacked their quarterback. The Bobcats were forced to punt, and with the ball on the opposition’s 31 yard line, Scott completed a deep shot to Simco for a beautiful 30-yard touchdown pass to cement the lead at 21–0. 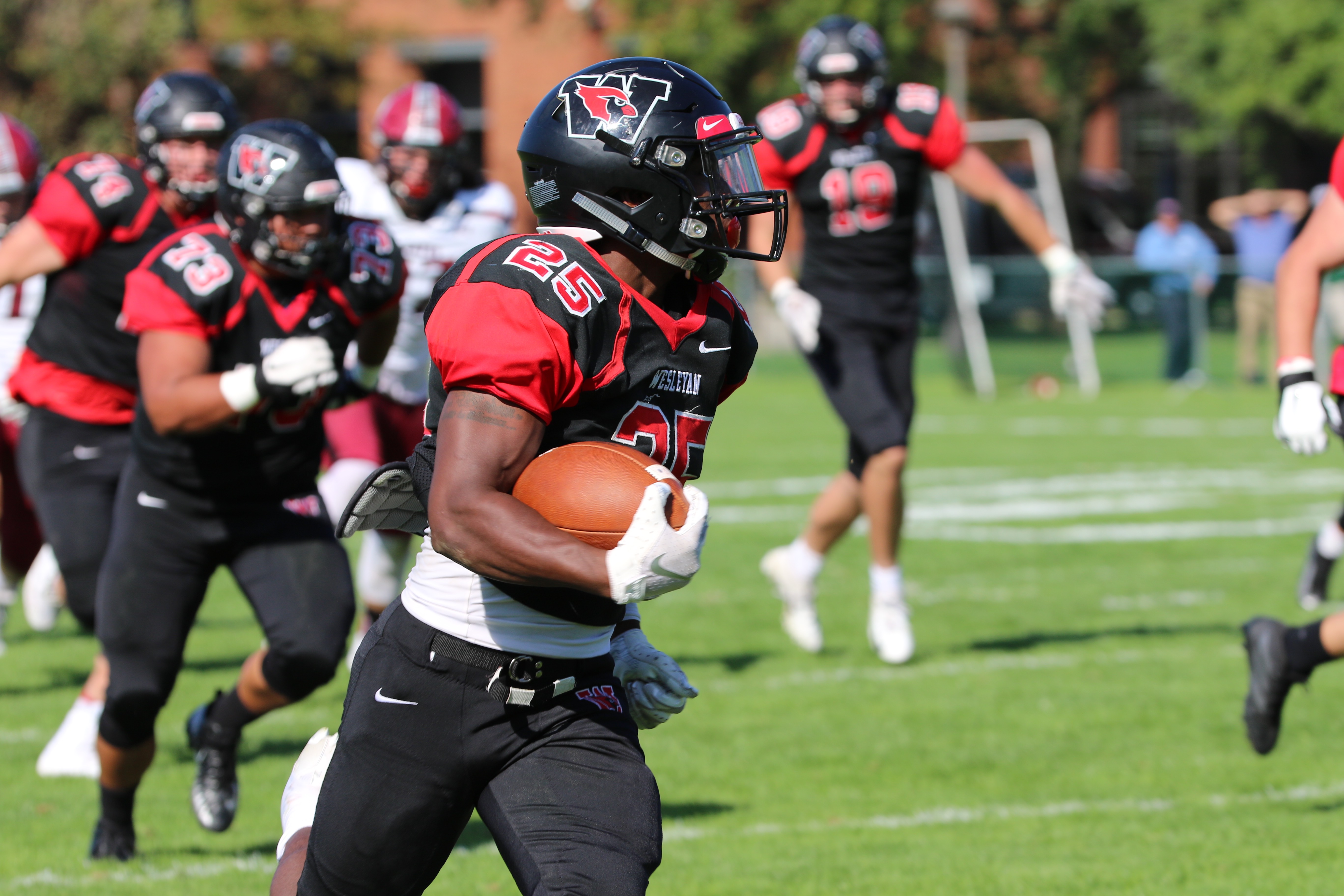 The Bobcats tried to pull together a drive in response, and while it was definitely an improvement, they failed to get out of their own half and were forced to punt again. However, their defense had gotten more into rhythm, so when the Cardinals were making their way into the redzone the Wesleyan offense was forced to take a field goal, making the score 24–0. The Bobcat’s offense continued to be a disappointment, going on a three-and-out and taking a sack to give the Red and Black excellent field position. It only took three plays for Scott and Scancarella to score yet another touchdown. In less than a blink of an eye, Wesleyan had the ball again when Banks grabbed the second interception of the day as the Cardinals continued their superb 2nd quarter. The offense kept rolling as they moved towards the end zone, but had to settle for another field goal to extend their lead to 34–0.

By the third quarter momentum had shifted. Bates put together a consistent, steady drive to score their first points of the day with a rushing touchdown from one yard out. But the Wesleyan defense had other plans. Ben Thaw ’20 blocked their extra point attempt to make the score 34–6. Likewise, the offense wanted to continue their dominance, and put together their own field-spanning drive to score again, thanks to Smith. Wesleyan pulled firmly ahead 41–6.

After this flurry of activity, the game settled until at the beginning of the fourth quarter, when Smith rushed for a 47-yard touchdown from practically the half-way line. Bates would manage to score once again within garbage time, but the game was basically already over.

The Red and Black have dominated all three phases of the game this season, from offense to special teams. Admittedly, two of the three games have been played against some of the worst teams in the conference (Bates and Colby), but Hamilton is just behind Wesleyan in the NESCAC standings. The easy streak does continue for another week against Bowdoin, but then Wesleyan will face Tufts at home in another installation of “The Night Game.”

After Tufts, the Cardinals have two other real competitors for the championship: Amherst and Middlebury. Those games will be the real test of the season. However, while the Cards face Bowdoin next week, Middlebury will be facing Amherst. The latter matchup should be a good indicator of who the Cardinals should watch on their attempt to take their first conference title since 2013.