Women’s Tennis Off to Strong Start with Promising Rookies 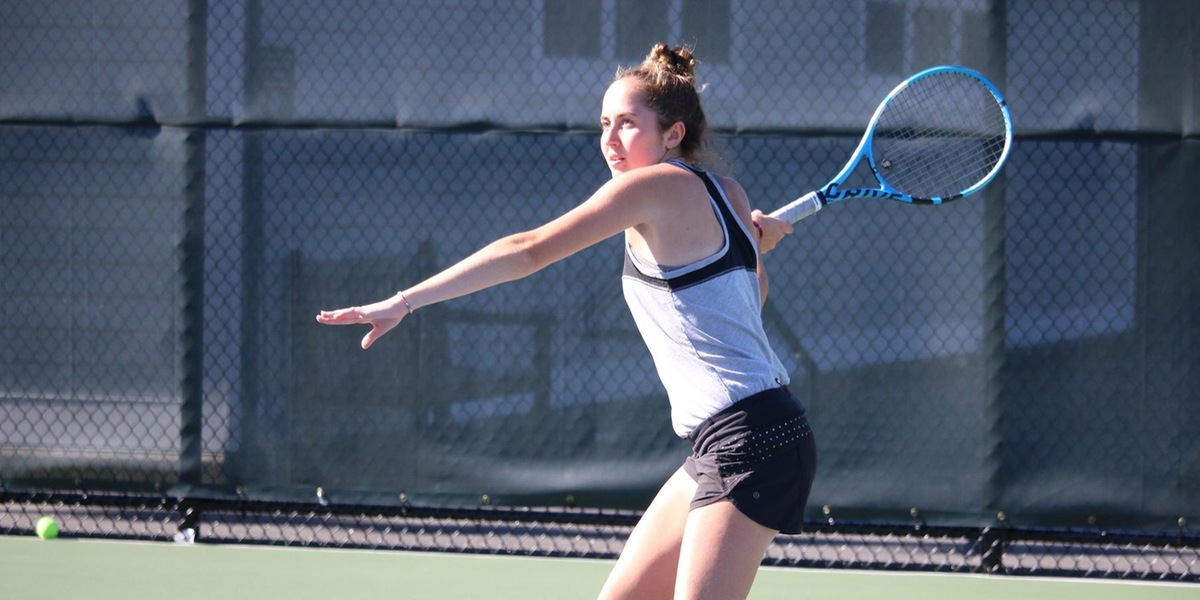 The No. 1 Wesleyan Women’s Tennis Team, fresh off a Division III National Title, is back in action for the fall season. The Cardinals began their 2019–20 run just a couple of weeks ago as the team traveled to Cambridge to attend the MIT Invitational: an individual tournament alongside No. 6 Amherst, No. 9 MIT, and No. 12 Tufts.

Five first-year players made their debut in the tournament, and all five celebrated the first wins of their Wesleyan career. The Cards’ success started right on day one as multiple impressive performances propelled them to victory.

Caitlyn Ferrante ’23 put on an impressive showing, winning the tournament’s singles title. Ferrante came out of the gate on fire, winning her first two college matches with a 6–3, 6–2 victory over Seraphim Castelino of MIT and a 6–7, 6–4, 10–4 win against Maggie Owensby of Amherst.

Alexis Almy ’22, a key contributor to the Cardinals’ NCAA title last year, didn’t miss a beat, defeating All-American Camile Smukler of Amherst 6–4, 7–5 in her first match. In her second round, she fought back from down a set to beat Sara Fernandez of MIT 2–6, 6–1, 10–3.

Katie Fleischman ’23 was victorious over Anya Ramras of Amherst 6–1, 6–2 to record her first win with Wesleyan. In the opening round of the consolation bracket, Sasha Geath ’23 topped All-American Libby Rickeman of MIT 6–3, 6–3 and Serim Jin ’23 handily defeated Anna Lowy of Tufts 6–1, 6–1.

Also in the singles consolation bracket, sophomores Megan Tran and Kristina Yu both recorded dominant wins, as Tran dropped only one game and Yu cruised to a 6–0, 6–0 win.

On the doubles court, Yu and Ferrante recorded Wesleyan’s only win. The duo jumped out to a big start and had no trouble against MIT for an 8–0 win to advance to the quarterfinals.

Day two brought even more successes to the Cardinal team. Ferrante again set the bar high for the Cardinals with a big win over Jackie Bukzin of Amherst, as the first year topped the 2019 ITA Northeast Rookie of the Year 6–2, 7–6 to advance to the semifinals. In the semifinals, she took on first-year student Madeline Suk of Tufts, advancing to the finals with a 6–4, 6–1 win after a tight first set.

Almy began the day with a 7–6, 6–2 win over Sarah Pertsemlidis of MIT. In the semifinals, Almy took on Tufts’ Tilly Rigby. Despite a tough battle with several comeback pushes, she ultimately fell 6–3, 7–5, 6–4. In the consolation bracket, Yu fell to Amherst’s Smukler in three sets, while both Sasha Gaeth ’23 and Jin each won three set battles. Their resulting victories led them to the semifinals, where they were pinned against one another. In the matchup with birds of the same feather, Jin came out on top to advance to the consolation final. On the doubles side, Ferrante and Yu dominated Tufts 8–0, but their run was cut short in the semifinals as the tandem fell 8–3 to Amherst.

The Cardinals brought home some hardware on the third and final day of the tournament. In the singles main draw final, Ferrante bested Tufts’ Rigby, capping off her spectacular weekend with a 7–6(4), 6–4 victory to win the tournament. It was the second straight year a Wesleyan rookie took home the title—Yu took the crown last year. Jin took the consolation final over Amherst’s All-American Smukler 6–4, 1–6, 6–3, while Almy and Gaeth took the doubles consolation final with an 8–6 win over teammates Henderson and Tran.

After a weekend off from competition, the Cardinals traveled to Middlebury this past weekend for the ITA New England Championships, where the top players in the region competed for a spot in the ITA Oracle Cup the following week in Georgia. Wesleyan utterly dominated the affair: all six tournament finalists were Cardinals.

On the first day of competition, the Cardinals went 10–0 in singles play as all five players won their first and second-round matches. In the singles semifinals, Fleischman topped MIT’s Sarah Pertsemlidis 7–5, 7–6(4) in two tight sets, while Jin cruised to a 6–2, 6–2 victory over Amherst’s Camille Smukler to set up the all-Wesleyan finals. The championship match saw Jin top Fleischman 6–4, 6–0 to win the crown.

On the doubles court, Yeung and Caitlyn Ferrante cruised to an 8–2 victory over Bates, before topping Bowdoin 8–3 to advance to the semifinals. Meanwhile, Yu and Henderson battled two tight matches to also advance to the semifinals, both coming down to the tiebreak. In the first match, the duo won 8–7(5), before advancing the semifinals with an 8–7(4) victory. In the semifinals, Henderson and Yu advanced with an 8–6 win, while Yeung and Ferrante won 8–5 to solidify the all-Wesleyan final. In the title match, Yu and Henderson picked up the first set with a 6–4 victory, before Yeung and Ferrante won the second 6–3 to force a super tiebreak. The super tiebreak was hard-fought but eventually saw Yu and Henderson prevail with a 10–8 victory. Ultimately, six Cardinals qualified for the ITA cup in an extremely successful weekend for the team.

The Cardinals will return to action on Oct. 11 when they compete in the NEWITT Tournament hosted by Smith and Mount Holyoke. The ITA cup comes later that week, from Oct. 17 to 19.

Nick Keating can be reached at nkeating@wesleyan.edu.