The Dark Side of the ‘Dan: Students Share Stories of Social Anxiety in Usdan 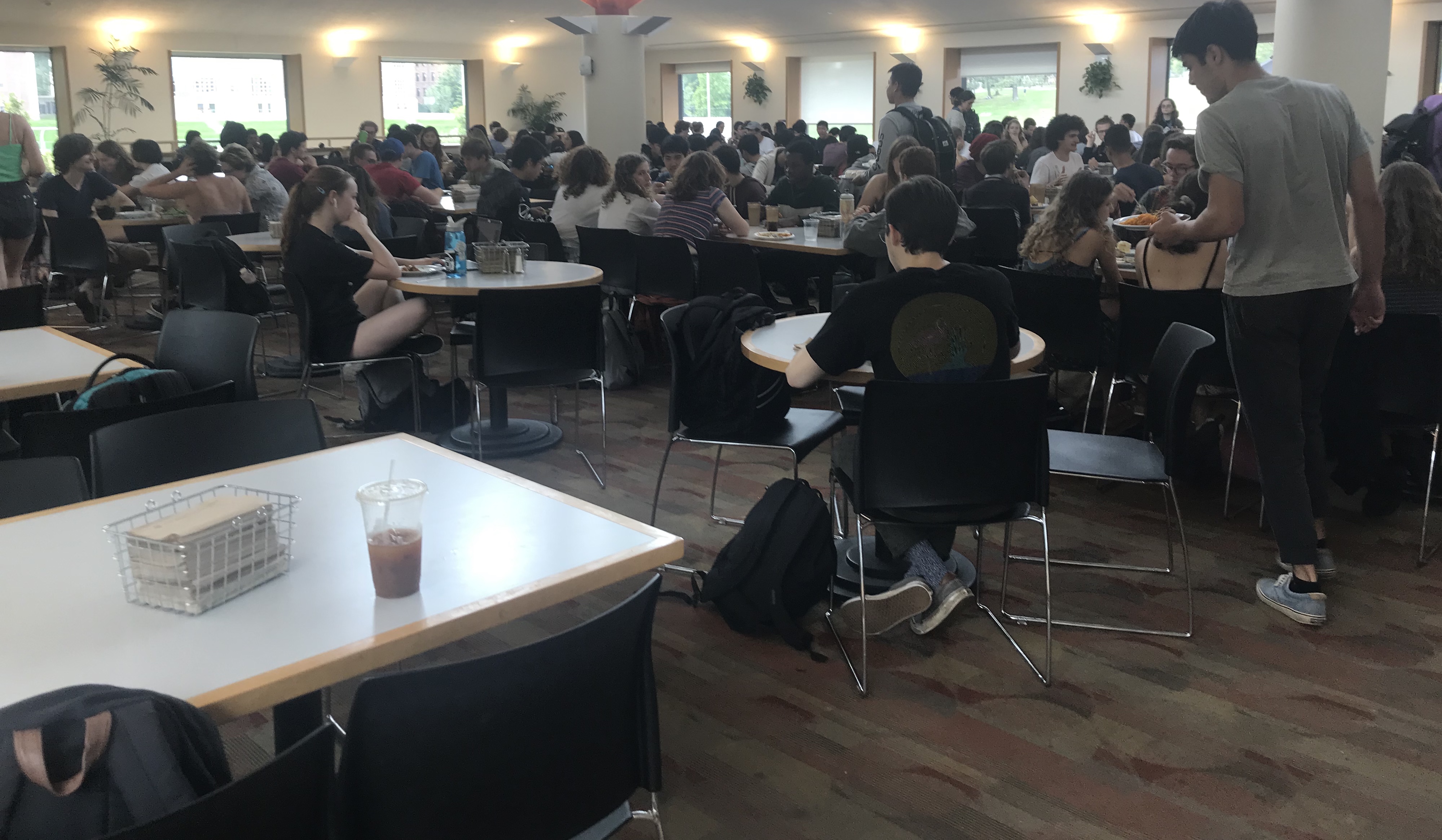 Since opening its doors in 2007, Usdan has become the de facto central hub for both formal and informal social interactions on campus. While Wesleyan was recently ranked by Niche.com to have the 17th best food among colleges in the country, it is not uncommon to hear students complain about the campus’s largest dining hall, the Usdan Marketplace, or talk about uncomfortable experiences of being there. Food aside, whether it is the perception of being constantly judged, the potential to run into past hookups, or the scramble to find seats, there is something anxiety inducing for many students to enter the space, let alone eat there.

“I try to avoid it at all costs,” Rebecca Roff ’20 said. “I just don’t go there anymore since I don’t have to. But I remember times during freshman year when I would skip meals, just because I was terrified to go to Usdan, especially alone.”

But Roff’s luxury as a senior cannot be afforded to underclassmen with a predominantly meals-based plan. For example, Elijah Comas ’22 says that while he does not particularly enjoy going to Usdan, he still eats there around 8 to 12 times a week, in order to preserve his points for special occasions or purchasing necessities at Weshop. But going alone is still a struggle.

“It is very rare that I eat alone, unless I’m in a rush,” Comas said. “I would feel isolated, vulnerable, and judged, whether or not I actually am.”

Roff offered her view of why this might happen.

“Maybe part of this anxiety comes from dining in high school cafeterias, which inherently possesses a cliquey-ness to it,” she said. “But still, Usdan is such a crowded focal point on campus, and it is intimidating to be in a fundamentally social place alone.”

However, Roff says that while the same anxiety may carry on from high school, the experience of dining in college is inherently different. In contrast to high school, there are way more options for where and when to eat, which constantly fluctuate depending on schedules and makes for planning meals with others occasionally difficult. And she explained that, while she used to sit with strangers during the first few weeks of her first year, she stopped doing so after feeling that people were judging her for eating alone or approaching a table with other people in it.

Wisly Juganda ’20 remarks that part of her anxiety is caused by the physical space itself.

“Unlike in Summies or Swings, [Usdan’s] physical space is literally accommodated only to sit for either four people or six,” Juganda said. “Everyone else is eating with other people, and there’s a feeling that you don’t conform if you’re all there by yourself hogging up a table meant for four. At peak hours when the tables are full, it can be so scary to ask somebody if you can join their table.”

Comas agreed that Usdan’s openness contributes to a stressful atmosphere.

“Eating, and the very activity of food in general, is a very vulnerable act,” he said. “But no matter where you are standing in Usdan, you can see everyone and everyone can see you. The level of anxiety it induces can range from as little as a simple discomfort for some people and triggering for others, speaking from personal experience, who have eating or dysmorphic disorders.”

Comas explained that the divide between the Marketplace’s West Wing and East Wing, informally known by most students as the Loud Side and the Quiet Side, promotes a social division.

“Although I’m not sure to what extent it is actually true, the association that jumps out to most students is that Loud Side is for athletes and Quiet Side is for artsy people,” he said. “The separate dining halls automatically create opportunities for exclusion and partitioning of social life on campus based on these reputations that begin at Usdan and permeate throughout the campus culture. I think in some ways it is mostly a self-perpetuating reputation that we say for ourselves. It comes from an individualistic place of trying to decide your own identity, as people generally enjoy the idea of being associated with one side over another. Nonetheless, it is an opportunity to create unnecessary division that we were given and have agency to, that we put up for and between ourselves.”

Ultimately, Comas argues, the real change must come from ourselves.

“As a community, we can do a better job of being considerate about sharing the space communally,” he said. “It is a very childish outlook to claim a table and say, ‘No, I sat here. Me and my friends get to have this entire table,’ or to encourage cliques and divisions in the dining hall. We can work together to break down these expectations.”